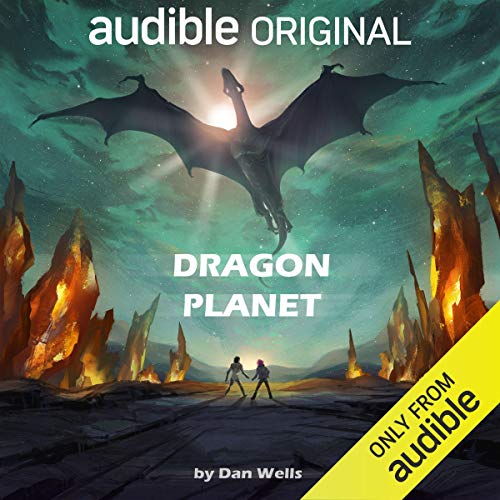 The much-anticipated sequel to Zero G and the middle grade debut by Dan Wells.

The colonists from the Pathfinder have arrived on Kaguya, a planet with low gravity but a very dense atmosphere. It’s fun to jump around, but the air makes you loopy. Even worse than that, the heavy atmosphere means that wind storms, although rare, are absolutely devastating.

Zero and Nyx help to get everything locked down before the first big storm, but they stumble onto a group of thieves who have stolen some mining equipment. Before the kids have a chance to get away and tell anyone, the storm hits and the massive winds carry them far away. Zero and Nyx are stranded on an unknown planet with no way to communicate, being chased by thieves, and with another storm bearing down on them.

And, oh yeah, this planet has dragons.

It will take more than just good luck to get back to the colony. It’s going to take science.

This was a great story. My 10 year old loves the first book in the series & immediately after Zero G asked if there was a sequel. It’s a great listen for the whole family. He thinks this book was at least as good as the original story and “maybe even a little better.”

can you m as ke another one please

my 14 year old son loves these stores. he even named his cat zero. I would pay for more book about zero and Nyx.

Fun for the whole family!

My kids loved this story, and Zero, the previous one. They want to see it made into a movie someday and are particularly looking forward to a bumblebeaver fire scene.

I enjoyed the first book and had no clue there was a sequel. It was just as great to listen to as the first! I thoroughly enjoyed it!

Will there be another sequel? I really want to know if another book will be produced.

One of the best audiobook I've listened so far~ Highly recommended. I really love this audiobook <3

loved it. Great story for kids and adults. lots of fun to listen to. I can't wait for the next one. I really hope there is another one soon.

I love a kids adventure story. This has the wonder of discovery and a clever duo to over come the bad guys once again. You gotta get book 1 "Zero G" for the set. These have become my favorite kids stories and I cant wait till my kids are old enough to get into a good book.

Both my child and I love this book and the first.
Looking forward to more ZERO adventures