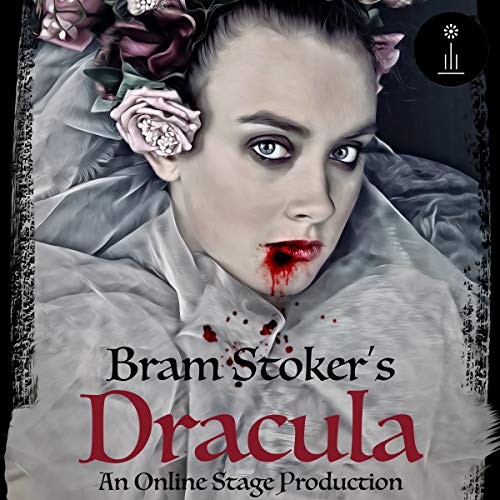 Dracula, by Bram Stoker. Presented by the Online Stage.

Bram Stoker’s 1897 novel is the most famous vampire tale ever told. British solicitor Jonathan Harker finds himself imprisoned in a castle in Transylvania and begins to believe his host, Count Dracula, is not entirely human. As his horror mounts, he suspects that Dracula plans to invade and conquer England, one victim at a time.

This thrilling classic is performed by a full cast.

Excellent Rendition of a Classic

The story of Dracula is a classic and had been published on audible many times. While I have read this story before this was the first time I listened to it and did so only because it had a full cast. Having multiple narrators really made a difference. I have heard a few full cast stories and they do not disappoint. It really adds to the imagery you create in your head while listening. This cast did a great job. Each person’s voice was perfect for their character and hands down my favorite was Van Helsing. If you haven’t read or listened to Dracula before or if it has been a while this version is definitely worth it.
I was voluntarily provided this free review copy audiobook by the author, narrator, or publisher.

What can I say about the story? It's Dracula. You know the impact it's had over the years. It still holds up as an effective thriller, even when one knows the twists ahead of time. Indeed, it's nearly impossible to not know the broad strokes of the story already, just through cultural osmosis. If anything, the story is all the better for it. It's not perfect by any means, but it's quite good, and remains one of my favorite books.

Elizabeth Klett demonstrates an incredibly deep understanding of the material in every detail of this project. The cover art is evocative to a casual viewer, but gains new meaning to anyone who is familiar with the work, like all great cover art. The ensemble cast were clearly given great direction, from the chemistry they exhibited with each other. They genuinely sounded like they were interacting with each other, even if some deliveries were occasionally slightly off. Her editing managed to maintain a good flow and rhythm without sacrificing pacing. Her performance as Mina Harker provided an emotional backbone for the entire project, and absolutely stole every scene she was in. The other performances ranged from good to great. The weakest performance was likely Glenn Hascall, as Van Helsing. He voice-acted quite well, and is obviously talented, but his rendition of Van Helsing's Dutch accent would often cause words to run together. Still, I thoroughly enjoyed this audiobook, and look forward to whatever work all of these people go on to next.

We got through it.

In our current fast paced lives it was almost difficult to stay focused. The performers made it possible to make it thru the whole Book. I doubt I could have read it on my own. Thanks Audible.

I hate quoting Chucky here but a true classic never goes out of style. Just finished this book today on Halloween and it couldn't have been more fitting. All the actors did a phenomenal job with the original material. I read that someone complained about Van Helsing's accent but I thought he came off just as I thought in my head years ago. Do yourself a favor and listen to this rendition. I was provided this audiobook at no charge by the author, publisher and/or narrator in exchange for an unbiased review via Audiobook Boom.

Dracula - Bram Stoker's tale stands the test of time still a classic 150+ years on. The start of a horror genre that is ever more popular today.
Excellent cast and production.
I was given a free copy of this audiobook at my own request, and voluntarily leave this review.

One of the best versions...

... of this great classic that I have ever come across.

The story itself is quite well known I think and has also been told in different forms (books, audiobooks, films etc.) many times.

I particularly like this version of Dracula though - it is not really a dramatised version, but the story is told by different narrators and the voices are great (Dracula's voice is especially spooky).

Well done and very entertaining - many many hours of great fun.

Excellent cast production of a classic

Audiobooks have been a phenomenal way to access the classics. Dracula is well presented in this full cast production of the classic story, and it was an absolute pleasure to listen to it during my commute.

The actors are well cast and give an excellent performance. I definitely recommend this book.

I tried to get through it. I really did - but the actor portraying Jonathan Harker has a high nasal feminine voice that strains to sound British. After 20 mins I just couldn't take the irritation and I exchanged. There's another full cast version of Dracula by Audible - much much better opening voice!!

An Awesome Reading of a Classic!

This was an absolute joy to listen to! I was excited to get this book to listen and was not disappointed! The story itself is a classic so not much else to say. However the narration was perfectly done and really, truly brought the book to life! I loved it and even my children and husband enjoyed listening to this. If you enjoy Bram Stoker's Dracula then you have to get this audio. This is an excellent addition to any collection!

Well Done! There is good reason for this book to have lasted so long and be so popular. it is well written and quite riveting. The addition of an audio performance takes it to another level and adds so much. You genuinely care for a character when you hear the emotions in their voice. An excellent book and performance!