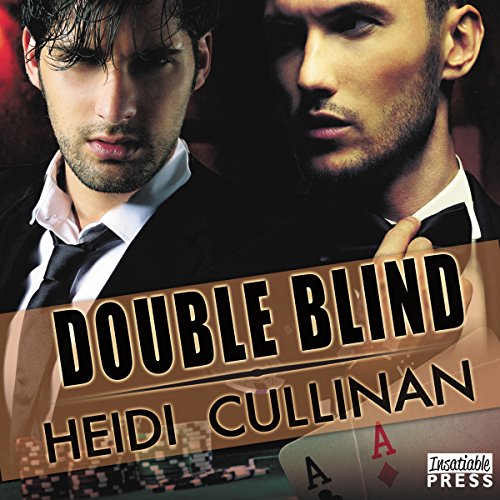 Know when to show your hand...and when to hedge your bets.

Randy Jensen can't stand to just sit by and watch as a mysterious man throws money away on the roulette wheel, especially since Randy's got his own bet going as to the reason this guy is making every play like it's his last day on earth. The man's dark desperation hits Randy right in the gut. Half of him warns that getting involved is a sucker's bet, and the other half scrambles for a reason - any reason - to save the man's soul.

Ethan Ellison has no idea what he's going to do with himself once his last dollar is gone - until Randy whirls into his life with a heart-stealing smile and a poker player's gaze that sees too much. Randy draws Ethan into a series of wagers that lead to a scorching kiss by midnight, but he isn't the only one with an interest in Ethan's vulnerability. Soon they're both taking risks that play fast and loose not only with the law but with the biggest prize of all: their hearts.

This book has been previously published and has been revised from its original release.

Good story, but the editing w/ the audio is horrib

Would you consider the audio edition of Double Blind to be better than the print version?

I have listened to MANY audiobooks & most of the books read by Iggy, but this one has been edited so poorly with the audio. Many sentences are cut short or so faded you can hear it.

Worth revisiting the series for

The guy who can suss out anyone can’t quite figure out the hot guy losing all his money kind of sort of on purpose but they get their grooves on together. Then people start throwing barrels of money at the broke guy and it mostly works out with the help of the demon’s penis, because everyone needs a good luck charm. The romance little quick to develop but deus ex Crabtree was at least a fun/scary way to scoot the plot along.

I did NOT like the last 1/3 of the previous book, mostly because of Randy. I did not finish it due to consent/safety issues (beyond the initial premise), not multiple partner issues. After listening to “Short Stay” I decided to give this series another chance. It’s more risky/aggressive than the author’s later books. Not all the risks work for me but I enjoyed this book. It’s nice to see that Sam & Mitch are still in love and alive. The multiple partner aspect and DS worked for me more than the B/SM did. Maybe it was in the subtext in how Randy got off? Maybe it was explained in book one after I gave up on it? But it felt more like “hey, spanking is edgy”. I was made to understand why he was switch; I was not made to understand him wanting to take a switch.

Minus one story star for giving $10M to a stranger who’s losing everything on roulette instead of the woman who has been running the casino for decades. And paying they guy with the casino saving idea with a drink.

Minus one performance star because I really dislike Randy’s voice despite otherwise being a big Iggy Toma fan. Production values, like volume chapter to chapter, were slightly less good than usual for HC/IT audiobooks but I only had to adjust volume a couple times.

If you want a pre-marriage-equality-in-all-states gay romance with guys who have good hearts, look out for each other & their friends, and get more emotionally grounded as they go on, aka a good romance, this book is a reasonable bet. I like it despite giving up on the previous book in the series. Odds are good you’ll like it too.

Double Blind is my favorite book in the Special Delivery series. Randy and Ethan are both such complex characters! I love how Heidi pretty Much walks the reader through the ups and downs of gambling. Iggy rocks this narration!! I absolutely love his Randy voice!!!

Great series, love the characters and their story and personalities.
And an amazing narration made this book really enjoyable.

I love this series, I love this book and I love Iggy Toma. Unfortunately the editing in this audio book is not as good as I’m used to.

This book was just as awesome as the first! I'm more of a mystery thriller fan rather than one of sappy love stories...However so far there's more than enough intrigue in this series....Can't wait for the next book!!

What did you love best about Double Blind?

The characters make this series. It has very strong connections between the MC's plus the secondary characters are awesome. The entire book has you on the edge of your seat and waiting for what is going to happen. Sappy at parts in all the best ways with little kittens while hotter than hot sex scenes.

Buy this book but start with the first in the series before. I'm moving on to the third and cannot wait.

A - not sure if the technical issues with this recording have been resolved, or if I just blithely ignored them.

B - I do feel like I know way more about Poker now than I did before listening to this book - feel like I took a bit of a Randy Jansen how to course myself.

I loved this as a Randy story. I love this as an exploration of couple-ship versus polygamy, and the balancing of emotional well being with kink. This series is full of kink and generally non-conventional relationships, and I think that this book does a beautiful job of laying the emotional groundwork for the reader to view these non-conventional connections with sympathy and understanding. Somehow it is okay to sleep with the married guy, to have had sex with the older, not particularly hot guy, to feel affection and loyalty to the old-school gangster "bad guy", and even to have a Poker analogy for the game of life.

This series and this book are not for everyone - but if you enjoy H.C.'s writing, can be open to kink and sometimes sappy "feels" with some decidedly unconventional romantic ties, then this one *is* worth the time and credit, imo.

Oh for the love of Randy!!

This whole series is awesome! also these characters make an appearance in the Love Lessons Series also..just sayin that's a great series too.

It's Just Not The Same

I know it's not fair to compare Double Blind to its predecessor, Book 1, Special Delivery. What is worse is that Iggy Toma narrates Book 2 and reinterprets Sam, Mitch and Randy in comparison to Book 1's original narrator, Robert Neiman. I don't know why Neiman's version was taken off the market. I guess contract issues or whatever.

I like Iggy Toma for other works, but I don't like his re-interpretation of Randy at all, though his Sam and Mitch is OK. This is not all on Iggy. I don't like the Randy of Book 2 nearly as much as the Randy of book 2 and that is on the author. Worse, Double Blind has technical flaws that detract at the worse times and that is on the producer I guess.

A great deal of my problem is that I love Book 1, by Robert Neiman as narrator that is, to death. I have re-listened to his version a good ten times and will likely repeat is again into the future many times. The story, the narration, is for me the best gay romance novel on the planet. It would be cruel to expect Heidi to hit two grand slams or in this case, draw two royal flushes back to back with both Book 1 and Book 2. It is just too difficult.