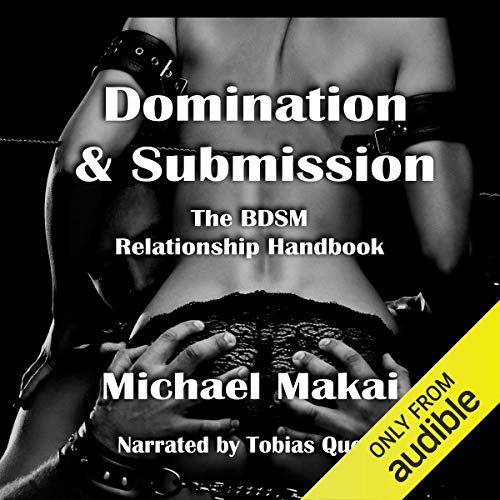 I went into this with an open mind. A few friends proclaimed how wonderful it was that I invested.

This is a horrible book. The beginning was good, but once the author got to describing the different types of doms and subs, it was over for me. Apparently, according to Makai, all doms are users who just want to hurt a sub except for one type - a Dom who sees himself as a white knight out to save subs from themselves. Makai seems to think he's the only good, trustworthy dominant in existence. He's either deluded or he's something far worse.

And then it got worse. His descriptions of the different types of submissives was deplorable. According to the author submissives - ALL SUBMISSIVES - are broken, helpless, needy freaks. That was the most insulting thing I've ever heard.

Scarred me and sent me running

But as my headline indicates, the small amount I listened to left me scarred and scared to even consider finding another top if/when my relationship ends. If there are men or Doms out there like this man, I wouldn't even take the chance!

Loved the book until you Google his name. Prison term for underage solicitation to bring a 16 yo into a poly marriage. Learned alot, but damn.

Cis and heteronormative and trasphobic!

This book is pretentious and cruel to LGBTQ people! The narrator overacts as well. HORRIBLE!

Mistress doesn't like having Her gender disrespected by cis guys, nor does She approve of stabs at non-binary people or switch erasure.

By chapter 2, I bought this audiobook for my own Dom. Even though I'm experienced and have been active in the BDSM lifestyle, this book was a great broad-brush overview that helped me to understand the drivers for kinksters who differ from me, as well as giving some great food for thought and some great conversation topics that have helped us to grow as a D/s couple. Listening to this book is like hanging out with someone who's "been there, done that" and normalizes an alternative lifestyle in a clear, positive manner, gratifyingly without the posturing that's all too common. My Dom and I have had some truly amazing and revealing conversations as a result of this book, and I'm so very glad I've had the opportunity to listen. Oh, and great narration too. :)

Bend over for Daddy!

Mike also touched on potential legal implications, even though it is between consenting adults. Having the police show up at your hotel room, or standing before a judge with sex offender charges, is not a circumstance any of us want to be in ... but can happen.

Definitely worth the money and time. However, I would recommend listening to it at 1.5 speed, as the reading was a little slow for my taste.

Normative, 30 years out of date

Would you try another book from Michael Makai and/or Tobias Ezra Queen?

No. Both too smug and self satisfied.

Would you ever listen to anything by Michael Makai again?

It could have been read faster and with a little less smugness. Mr. Queen misses the mark on an interpretation that would have made the book more tolerable but does capture excellently the intended over-confidence.

As the book says "don't read this book." It was serious. Instead, read "The New Bottoming Book" as it is excellent. You can read "The New Topping Book" as well, but Bottoming was better. It's an excellent introduction. Next, look up your local BDSM educational organization. Alternatively, look up a kink/BDSM convention with courses. Westcoastbound.ca is a great example, costing only $100 for early early bird members and giving you actual practical skills including courses that focus specifically on D/s. Try making an account on fetlife.com and looking up local events. Those efforts will pay off a hundred fold what reading this book will - and they'll expose you to a healthier more holistic idea of what kinksters look like instead of this normative, prescriptivist garbage.

What could Michael Makai have done to make this a more enjoyable book for you?

The author is obnoxious and arrogant and he thinks he's really funny. He dedicated a section of the book to his own quotes in which he thought were particularly profound or funny. One of these hilarious quips was " I love red heads. It's not their hair color, it's the crazy". He also invented a new category of Dom for himself which he calls " The White Knight Dom". He goes into how the Bible supports this lifestyle in the way that it instructs men how to rule over their wives and how women should serve their husbands. I thought it was an enlightening view into his ideology when he started talking about how G*d was probably a Dom like him.

Disappointment. There have to be better books out there!

most realistic view I have encountered. I found this book eesy to understand as well as easily read. The personal stories brought to life what points were, nice touch.