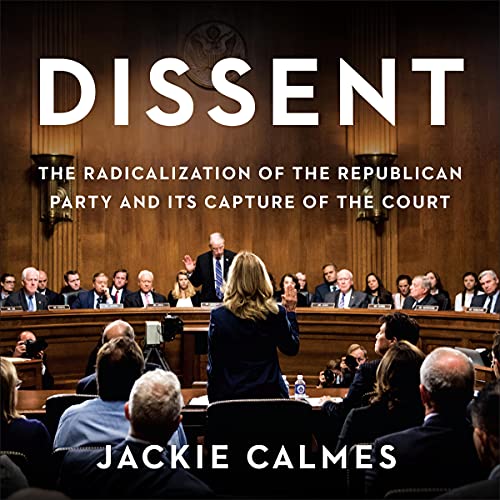 Featuring new interviews with his accusers and overlooked evidence of his deceptions, a deeply reported account of the life and confirmation of Brett Kavanaugh, set against the conservative movement's capture of the courts.

In Dissent, award-winning investigative journalist Jackie Calmes brings listeners closer to the truth of who Supreme Court Justice Brett Kavanaugh is, where he came from, and how he and the Republican party at large managed to secure one of the highest seats of power in the land.

Kavanaugh's rise to the justice who solidified conservative control of the supreme court is a story of personal achievement, but also a larger political tale: of the Republican Party's movement over four decades toward the far right, and its parallel campaign to dominate the government's judicial branch as well as the other two.

And Kavanaugh uniquely personifies this history. Fourteen years before reaching the Supreme Court, during a three-year fight for a seat on the DC Circuit Court of Appeals, Democratic Senator Dick Durbin would say to Kavanaugh, "It seems that you are the Zelig or Forrest Gump of Republican politics. You show up at every scene of the crime."

Featuring revelatory new reporting and exclusive interviews, Dissent is a harrowing look into the highest echelons of political power in the United States and a captivating survey of the people who will do anything to have it.

"With a depth of research and a palpable love of politics, Jackie Calmes tells the story of the GOP's journey to power and the reckoning the party now faces as it struggles to contain the forces it unleashed. DISSENT is a brilliant look at the players who drive the system, unspooling through a Supreme Court confirmation fight that will resonate for decades." (Helene Cooper, New York Times best-selling author of The House at Sugar Beach and Madame President)

"The steady rise and tumultuous confirmation of Brett Kavanaugh — and with that, conservative command of the Supreme Court — reflects the transformation of the GOP, decades in the making and still underway. Clear-eyed and tough-minded, drawing on 40 years as a journalist and more than 200 interviews, Jackie Calmes takes us behind the scenes to see how it happened, and to understand the repercussions that will reverberate for years ahead. Dissent is engaging, insightful and, at times, alarming." (Susan Page, New York Times best-selling author of The Matriarch)

"Jackie Calmes - one of the most insightful journalists in Washington, or anywhere else - brings fresh behind-the-scenes reporting and crackling narrative to the story of how the decades-long conservative project to remake the judiciary collided with the #MeToo movement. The bruising battle over Brett Kavanaugh's Supreme Court nomination exposed the fragility of our institutions and our political system, and neither has yet to recover." (Karen Tumulty, Washington Post political columnist)