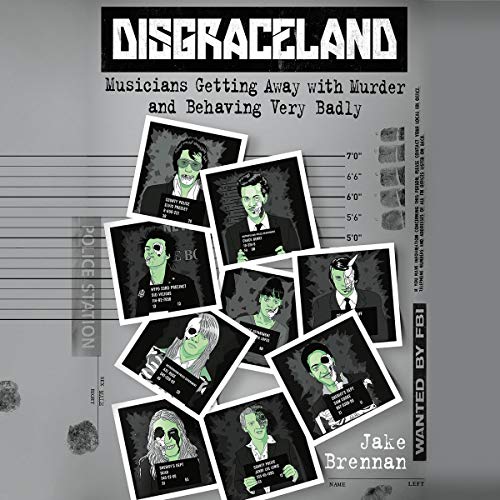 From the creator of the popular rock 'n' roll true crime podcast Disgraceland comes an off-kilter, hysterical, at times macabre book of stories from the highly entertaining underbelly of music history.

You may know Jerry Lee Lewis married his 13-year-old cousin, but did you know he shot his bass player in the chest with a shotgun or that a couple of his wives died under extremely mysterious circumstances? Or that Sam Cooke was shot dead in a seedy motel after barging into the manager's office naked to attack her? Maybe not. Would it change your view of him if you knew that, or would your love for his music triumph?

Real rock stars do truly insane thing and invite truly insane things to happen to them: murder, drug trafficking, rape, cannibalism and the occult. We allow this behavior. We are complicit because a rock star behaving badly is what's expected. It's baked into the cake. Deep down, way down, past all of our self-righteous notions of justice and right and wrong, when it comes down to it, we want our rock stars to be bad. We know the music industry is full of demons, ones that drove Elvis Presley, Phil Spector, and Sid Vicious and that consumed the Norwegian black metal scene. We want to believe in the myths because they're so damn entertaining.

Disgraceland is a collection of the best of these stories about some of the music world's most beloved stars and their crimes. It will mix all-new, untold stories with expanded stories from the first two seasons of the Disgraceland podcast. Using figures we already recognize, Disgraceland shines a light into the dark corners of their fame, revealing the fine line that separates heroes and villains as well as the danger Americans seek out in their news cycles, tabloids, reality shows, and soap operas. At the center of this collection of stories is the ever-fascinating music industry - a glittery stage populated by gangsters, drug dealers, pimps, and groupies, with violence, scandal, and pure unadulterated rock 'n' roll entertainment.

Jake, I think you can do better

First, the narration was terrible. Distracting to have someone read like robot and then put the wrong emphasis on syllables.
Second, I am a fan (from the very first show) of the podcast and even went to the live show when he was on town. This book was too short, the stories were too stripped down. I thought that if we were going to get a whole book, we would be getting more detail than if he just prepared a podcast for each story. Each story would not have made a full podcast.
Third, the choice of stories was really good and I liked how most of them segued into the next. It did make it a little hard to tell where the end of one was and the beginning of another was. Most of the stories didn’t really have a climax, so hard to tell when one was over.
Disappointed, but pleased to get a few extra stories.

This book is good if you don’t listen to the podcast but if you do, don’t bother

I learned a few things

I learned things, but the narration was distracting. Throughout the book, Mr. Brennan's voice would drop off at the end of sentences and his reading was melodramatic. I understand that he was trying to be engaging and take us to the action, but the rollercoaster rises and dips of his voice made me miss things.

As for what was in the minds of his subjects, not sure how he could get there even with research. Even personal diaries wouldn't tell us what someone was thinking in the minutes before they died.

It was somewhat entertaining and something to listen to when I don't need to take in every word, but I wouldn't quote any of the material as gospel. Not a bad starting point if one sees a celebrity in which one is interested and wants to know if the interest is sufficient to scout out other books on said celebrity.

I was expecting a book about rock bands throwing TV's out of hotel windows, during wild sex parties. Unfortunately, this wasn't as interesting. It mainly involves murders in a drawn out format. I only made it through half of the book before quitting.

Disgraceland is my favorite podcast! Jake does an amazing favor to his listeners! Great stories and a great story teller! Highly recommended

The book is like the podcast. Even if you heard some of these artist in the podcast still get the book. The content is not identical. Jake's has such a talent for telling a story and being creative. Wish there were more artists like him.

Amazing and feels so real

Brennan’s writing style is one that gives life and realism to the subject. Each conversation and situation seems so real that its hard to think they didn’t happen. Any liberties taken with actual situations are swept away as the listener has been given the permission to make the one Brennan conjures as “gospel.”
To summarize: it’s a great book. Brennan is indeed “a bad bad man” (bad meaning good)

would have been a great book

This would have been a great book but 3/4 of it was on the podcast. Very disappointing to know that I had already heard almost the whole book.

Unreal stories from the artist we all know! this is what makes them true rock stars!