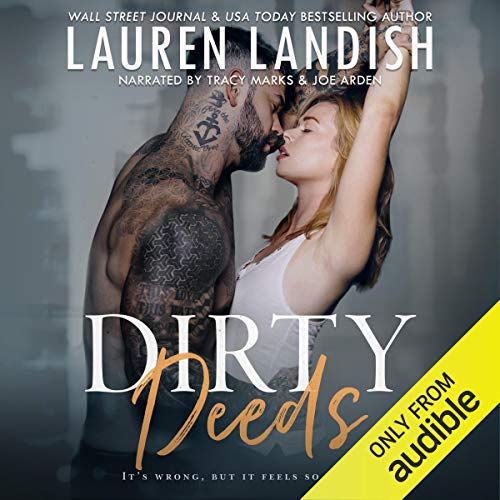 It's wrong, but it feels so right.

For months, I’ve watched her. I know she’s off-limits, but she’s so sweet, so innocent...and so sexy that she haunts my dreams.

Maggie doesn’t belong in this world, this seedy underbelly of the city. But there she is, my angel with her wide eyes behind her nerdy glasses. So, when she needs help, I’m the only one who can protect her.

It didn’t even take a single kiss for me to fall in love with her. I know I shouldn’t - a man like me doesn’t deserve an angel. I’ll hurt her, break her...ruin her. Still, I can’t help myself.

She’s going to regret this later, regret me, and probably even hate me. But I’m a selfish man, and if she wants this now, I’ll give it to her. I’ll give her everything.

Shane is in charge of security at the club where Maggie works. Maggie is sweet, sexy and a little nerdy and Shane finds her irresistible. Shane is a rough, bad boy and the star of all her fantasies, not that they would ever come true. Maggie is a good girl, not the type Shane would ever consider. Obviously Shane hides his feelings well. Shane believes he is not good enough for Maggie, so there's that.
After an unexpected incident, Shane finds himself alone with Maggie at her apartment....playing with fire. Well more like a spark. Maggie is more that what she portrays herself to be. It's something she can't disclose at this point in time, so no, they will never be playing with fire. Not possible with the 'out of his league' thing and the non disclosure. Just when things begin to settle, Maggie gets herself into a predicament and needs to disappear. Her only hope is Shane. That's when he decides to come clean about who he really is.
WOW, I TOTALLY DID NOT SEE THAT COMING ! AWESOME STORYLINE WITH LOTS OF TWISTS AND TURNS ! INSANE, INTENSE CRAVING WITH RAW, ALL CONSUMING PASSION ! ! ! DIRTY, NASTY, BREAK THE BED, RIP THE SHEETS SEX ! ! ! THIS STORY IS AMAZING FROM BEGINNING TO END AND IT WILL DEFINITELY KEEP YOUR INTEREST !

It was a pretty good story. Shane is a smokin’ hot uber alpha. That dirty mouth of his was sinful. I loved it. The story wasn’t what I was expecting, but that was a good thing. Maggie is one tough cookie!

Joe Arden totally owns the roles he narrates, and he’s one great dirty talker. He’s the reason I listened. Tracy Marks doesn’t have a bad voice, but the way she emphasizes the last letter at the end of every sentence is annoying enough that I skip to listen to Joe’s chapters. I already read the book, so I didn’t miss anything in the skipped chapters.

This is such a good story and these two read it so well. I could just set and listen to Joe Arden all day. His voice was perfect for Shane's character and Tracy Marks did Maggie proud as well. I had read this book when it released and it's one of my favorite from this author and when the audible version came out I wanted to listen as well. I received a copy to listen to and to review and give my honest opinion. Their version of this book keeps you interested, their voices match what the characters are supposed to be like and you feel you are part of the story while listening to them tell it. This is one I will listen to again and again. I loved it and I highly recommend it. I hope you enjoy it as much as I did.

Imagining a deep dark dangerous Shane, a very blond nerdy Maggie and this book comes alive. Dirty Deeds, Maggie is there to find the deep dark secrets of the rich and famous, Shane has his secrets as well and to protect Maggie he will do everything he needs to get her out. The narrator's bring Shane and Maggie to life, the story is sizzling and the suspense so keeps you glued to the end.

Dirty Deeds is the third book in the Get Dirty series. While the female narrator has remained the same for all the books thus far, this time around the male narrator was changed. Probably my one complaint about the female narration was the fact that in the previous book Dirty Laundry the main character Maggie appears as a secondary character, but she's voiced a little differently than she is here in this book. I would have liked the narration to remain the same, making the character more distinctive from the previous female leads. The male narrator did a pretty good job, however, there were a few times the delivery was a bit too monotoned. Not much inflection.

I liked when books throw me for a loop and change up the predictability a bit. And that's what makes Dirty Deeds my favorite of the series so far. I really liked the romance between Shane and Maggie. I felt like it was a bit lighter on the explicit sex, but I felt like that fit with the characters. I was happy to see Lauren Landish writing for the characters and not forcing something that would end up feeling out of place.

Make no mistake, there's plenty of heat between these two as they have the perfect opposites attract / forbidden romance trope going on for them for sure.

Lauren Landish has definitely set up the next couple and I'm really looking forward to seeing where their story goes next.

intense sex, even went their lives are on the line

Hot, sexy bad boy who will be the good girl's hero or drag her right to hell. She's going willingly legs and heart wide open.

I feel this is the best book yet out of the 3 I have read.

Best in the series!

I really liked this one! Good story, good characters and I love Maggie!!! I felt very relatable to her in the second book as well as this one. And I'm pretty sure Shane is my sexy dream fantasies coming true. Ha! Overall it's a great listen.

This was so freaking good and NASTY . I absolutely loved it. listening once again

Loved every bit of this steamy novel. I love Lauren’s work! Looking forward to dirty secrets next!