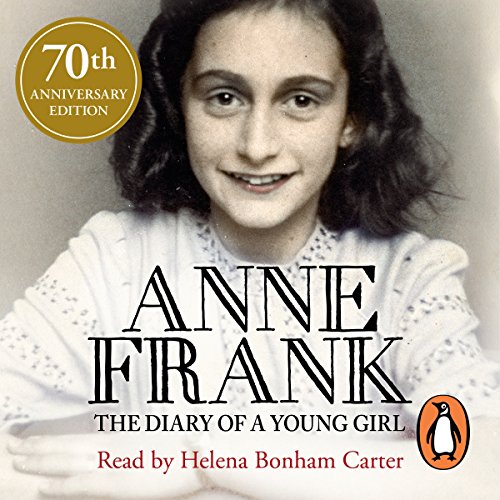 Diary of a Young Girl

In celebration of its 70th Anniversary, this is the complete and unabridged audiobook of Diary of a Young Girl, the memoir written by Anne Frank and narrated beautifully by English actress Helena Bonham Carter. The tragic early teenage years of Anne’s life that she documented in her diary are as powerful now as it was when it was first discovered and published in the years after World War II. Audible listeners will revisit or discover Anne’s intimate account of survival and family. A heartbreaking memoir from one young witness to a senseless and terrible war.

One of the most famous accounts of living under the Nazi regime comes from the diary of a 13-year-old Jewish girl, Anne Frank. Edited by her father Otto H. Frank and German novelist Mirjam Pressler, this is a true story to be rediscovered by each new generation.

'It's difficult in times like these: ideals, dreams and cherished hopes rise within us, only to be crushed by grim reality. It's a wonder I haven't abandoned all my ideals, they seem so absurd and impractical. Yet I cling to them because I still believe, in spite of everything, that people are truly good at heart.'

In the summer of 1942, fleeing the horrors of the Nazi occupation, Anne Frank and her family were forced into hiding in the back of an Amsterdam warehouse.

Aged 13, Anne kept a diary of her time in the secret annexe. She movingly revealed how the eight people living under these extraordinary conditions coped with hunger, the daily threat of discovery and death and isolation from the outside world.

A thought-provoking record of tension and struggle, adolescence and confinement, anger and heartbreak, the diary of Anne Frank is a testament to the atrocities of the past and a promise they will never be forgotten.

"A modern classic . . . Anne's diary tells a story that is true, memorable, important and strongly personalized . . . compelling reading." (The Times)

"Anne Frank’s diary is one of the greatest books of the century … As she brings herself and her circumstances into such buzzing, engaged life on the page, she triumphs over her history." (Guardian)

"Still rings down the decades as the most moving testament to the persecution of innocence." ( Daily Mail)

Amazing . Just a plain representation of thoughts although one wonders if the vocabulary of the kid was so rich (for her age). Loss during world wars I’d not just lives but the ideas and talents as well.

The style of narration was great. The voice modulation gave a very realistic feel... it seemed seemed​ as if Anne herself was talking.
This was my first audio book and I am surely not disappointed.

well worth a listen, loved it!

I loved the narrator in this reading, the book was well written and I enjoyed the insights offered. I did get emotional at the end. Well worth a listen! Overall I loved it.

A book every person should read during their youth and then again in adulthood. No other written document has ever brought me closer to the meaning of war than this diary and more even: Anne also opened up parts of my own persona to me and taught me so much about life and love, despite her young age.
What an outstanding person. I like to think that with the success of her book and her immortality through it, her life wish has been fulfilled and she can smile in heaven.

You connect with Anne

Helena Bonham Carter does a spectacular work of narrating this diary, that you are pulled into the life of Anne Frank day by day.

I am fascinated by WW2. This Story is so beautiful and tragic at the same time. I hate the fact that this is not like a movie were you know everything right up to the end. Wish I could know how she felt and feel. Such a brave and wise child. But then again it would have been so hard.

So inspiring and beautifully written. Not what I expected. Loved Helena Bonham Carter reading it!

Witty and funny and historic writing !

Anne Frank is a savage, writing with wisdom beyond her teenage years. A great read that describes 1940's Europe from a Jewish perspective.

A diary written in extraordinary situations

Its a unique book, since this diary was written by a talented young girl surviving in extraordinary conditions. Its beautiful and a must read.