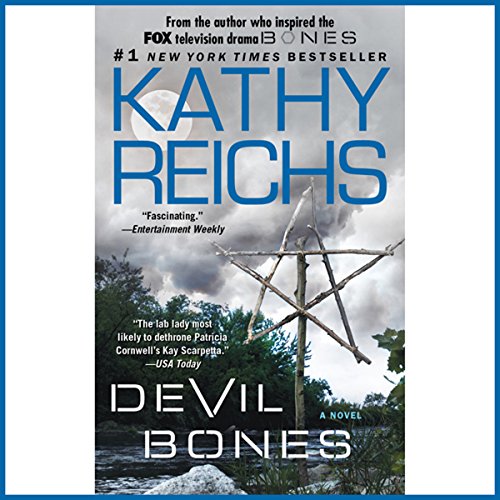 In a house under renovation, a plumber uncovers a cellar no one knew about, and makes a rather grisly discovery - a decapitated chicken, animal bones, and cauldrons containing beads, feathers, and other relics of religious ceremonies. In the center of the shrine is the skull of a teenage girl. Meanwhile, on a nearby lakeshore, the headless body of a teenage boy is found by a man walking his dog.

Led by a preacher turned politician, citizen vigilantes blame devil worshippers and Wiccans and begin a witch hunt, intent on seeking revenge. Forensic anthropologist Temperance Brennan - "five-five, feisty, and 40-plus" - is called in to investigate, and a complex and gripping tale unfolds in this deadly mix of voodoo, Santeria, and devil worship.

With a popular series on Fox - now in its third season and in full syndication - Kathy Reichs has established herself as the dominant talent in forensic mystery writing. Devil Bones, her 11th taut, always surprising, scientifically fascinating mystery, features Reichs' signature blend of forensic descriptions that "chill to the bone" (Entertainment Weekly) and the surprising plot twists that have made her a number one bestselling author in the United States and around the world.

absolutely love this author and her writing...cannot wait for her next book. A must read

I am a fan of all the Kathy Reichs novels. Loved this one also.