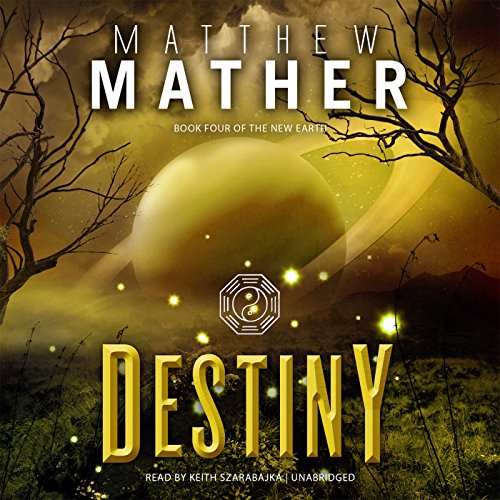 After the destruction of the planet by Nomad, the final fight for the future comes to a staggering conclusion as Earth drops toward Saturn and Jessica Rollins must decide whether to save the ones she loves, or save the human race.

Destiny is the fourth and final novel in a four-book saga that follows one family's fight to survive on a new Earth after a whole new category of disaster - all the more frightening as the science behind it was developed by a team of astrophysicists from CERN, SETI, and the Keck Observatory.

After finishing the fourth book in the series, I don't know whether it's good or bad!
The SF concept is great; a new twist on the 'worlds colliding' idea. The descriptions of a world quickly icing over are interesting, although I don't think any world-wide volcanism would have finished in less than several years, not several weeks.
I'm even willing to endure a lot of hand-waving regarding international cabals of billionaire preppers in their hardened underground shelters.

My issue is with the main character, Jessica. She is supposed to be a US Marine, a combat veteran with a prosthetic leg and a lot of issues with her family. The authors handled her family issues reasonably well. They did an excellent job of portraying the problems of life with (and occasionally without) a prosthesis.
But from the very beginning, Jessica's reflexes and actions when in sudden danger are not those of a fully trained US Marine, much less of a combat veteran. They are those of a civilian prima donna who happens to know how to shoot. She is indecisive at the wrong times, cannot work as part of a team, and surprisingly unfamiliar with unarmed combat.

I enjoyed the many plot turns and unexpected twists. A fast and enjoyable read. Would love to see another trilogy on what will happen with that crew next.

Four 4 the intrigue and excitement returns

this narration brings the level of excitement and complexity of the plot that was somewhat lost in book 3 back into play. With the continually excellent narration make the Nomad series one of the best of Mathew Mather wonderful tales.

I don't usually write reviews but felt compelled. I binge listened to all of this series and perhaps this contributed to the problem...the female character is so unpleasant it distracts from the story. By book 4 it was definitely a struggle to finish. I am not someone who has a problem with strong female characters either

Book One revealed some promise, while Book Two was my favorite novel in this four-part series. It could have been a satisfactory stand-alone work. The authorial partnership in Book Three didn't work for me (style shifted, characters lost depth and appeal, and much of the plot could have been contained within a trilogy instead). I do enjoy this narrator, which explains my two stars.

Book Four was a literal and metaphysical nightmare! I was shocked, even horrified, by the ending. None of the major players were in character, so to speak, and after investing my time and interest in this series, I feel cheated. The events at the very end went beyond a horrific physical and sexual assault to the destruction of at least three characters' lives, putting them in a tragic scenario they did not choose. How could any of these transactions lead to the "freedom of no fear?" This was really too much.

narration spot on.
enjoyed topic and the adventure of the characters. may read this one again.

Nice conclusion to the story it seems.

The ending seems likes my leaves open a possibility for more books. you are left wanting to know more about what's left on Earth.

This one seemed to wrap up almost all the subplots that have been brewing throughout the series. It doesn't end exactly how I thought it would. There are a mixture of disappointments and revelations as to how things fit together and more on what actually happened. An only ok story. Narration was great.

Finally questions answered! Very good narration, story though long was worth it at the end. I hope you enjoy this series as much as I did!