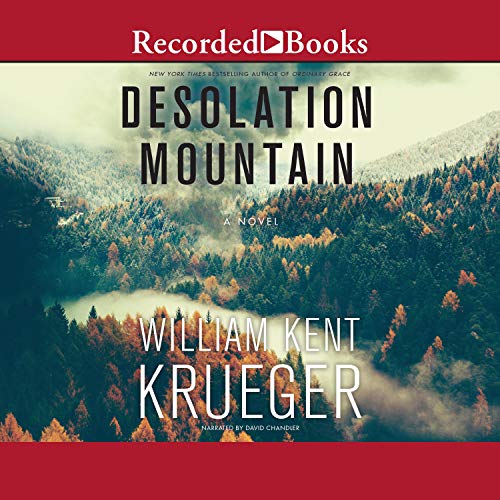 New York Times best-selling author William Kent Krueger delivers yet another "punch-to-the-gut blend of detective story and investigative fiction" (Booklist, starred review) as Cork O'Connor and his son Stephen work together to uncover the truth behind the tragic plane crash of a senator on Desolation Mountain and the mysterious disappearances of several first responders. This is a heart-pounding and devastating mystery the scope and consequences of which go far beyond what father or son could ever have imagined.

There are more things in heaven and earth, Horatio, than are dreamt of in your philosophy.

To Stephen O'Connor, Hamlet's dour observation is more than just words. All his life, he has had visions of tragedies to come. When he experiences the vision of a great bird shot from the sky, he knows something terrible is about to happen. The crash of a private plane on Desolation Mountain in a remote part of the Iron Lake Reservation, which kills a United States senator and most of her family, confirms Stephen's worst fears.

Stephen joins his father, Cork O'Connor and a few Ojibwe men from the nearby Iron Lake reservation to sift through the smoldering wreckage when the FBI arrives and quickly assumes control of the situation. What seems like the end of the O'Connors' involvement is, however, only the beginning of a harrowing journey to understand the truth behind the Senator's death. As he initiates his own probe, Cork O'Connor stumbles upon a familiar face in Bo Thorson, a private security consultant whose unnamed clients have hired him to look quietly into the cause of the crash. The men agree to join forces in their investigation, but soon Cork begins to wonder if Thorson's loyalties lie elsewhere.

In that far north Minnesota County, which is overrun with agents of the FBI, NTSB, DoD, and even members of a right-wing militia, all of whom have their own agendas, Cork, Stephen, and Bo attempt to navigate a perilous course. Roadblocked by lies from the highest levels of government, uncertain who to trust, and facing growing threats the deeper they dig for answers, the three men finally understand that to get to the truth, they will have to face the great menace, a beast of true evil lurking in the woods - a beast with a murderous intent of unimaginable scale.

Love in a Cynical Age

"Desolation Mountain" is a very modern tale which will appeal to both cynical, conspiracy-theory minded individuals and to those who are more inclined toward a love-above-all and truth-will-out view of life and politics.

Cork O'Conner and his family are back, and so are his law enforcement colleagues and his Ojibwe relations and values. O'Conner has always, in fact, been a man torn between contrasts. His traditional, conservative law & order past leads to a tendency to trust authority in general and in most cases. His native heritage and personal experiences, on the other hand, give him insight into the many prejudices that often prevail when officials of the government determine the nature of justice.

The plane of a progressive Senator crashes in Cork's old territory, and things get complicated fast. Just what is the goal of all the numerous and secretive agencies who descend upon town and reservation in search of answers? Why are they so often menacing and dangerous - as bad as the terrorists they suspect? And, do they really want answers, or are they seeking scape goats and cover-ups?

Cork's family and the close-knit residents of the Ojibwe Reservation are caught in this confusing game of who's who and what's what. With the help of the old wiseman and healer Henry, they seek truth - to find answers and ultimately to save their own lives.

Evil is here in misguided and often misused authority. But, love is here as well - love for and among family and community. As always in this series, Cork's beloved wilderness and the people who value it provide solace and direction.

I so love this series and David Chandler

It all seems to begin with a troubling vision Stephen O’Connor has that is burdening him. He seeks answers from Henry Meloux but when a plane carrying their US Senator crashes on nearby Desolation Mountain, Stephen believes that event is connected to what he’s seen. When he, Cork and his brother-in-law Daniel English head to the crash site to help search for survivors, that sets off a chain of dangerous reactions.

I so love this series with its strong sense of setting expertly connected with the indigenous Anishinaabe culture. I’m 17 books in and continue to learn about the region and customs. The characters have evolved so naturally, especially Stephen as he embraces his heritage and attempts to find his way into his own identity. Cork is also learning how to parent his now adult children and his joy in helping raise his grandson, Waaboo, is just lovely. These are the subtler and finer points of the story in the midst of a confounding, suspenseful mystery. While the plane crash brought out every alphabet agency, all trying to assert their authority, there were rogue operators in their midst who weren’t above taking drastic measures to forward their agenda.

This was an extremely puzzling mystery, moreso because you really couldn’t figure out the good guys. Tip of the hat to the author for inserting some of the sentiments currently dividing our country without taking a point of view and making it relevant to the people in this Minnesota region. It rang so authentic and was in keeping with the characters we’ve come to know. For me, the narrator, David Chandler, has become an integral part of this series. He’s just wonderful and I’ll always listen to these stories. I loved everything about this one, even the awful parts because they kept this true and authentic.

I've read most of these, despite having sworn off reading any more some time ago. There's too much reliance on characters whose motivations are obscure and their opposition to good sense utterly obdurate and wrongheaded. On the other side are sensitive new-age more-or-less Native Americans. The setting is good, the writing is good (if bipolar, as above), the characters are engaging, the conflicts not real but certainly based on topical trends. I like the heart of these books, though I resist their simplism and dualities. But I guess I'll keep reading them.

This is the last book in the series. I can't say enough how much I have enjoyed the series. In starts with Iron Lake. Each book involved the same characters, bring you into the family.

I am giving this latest book in the Corc O'Connor series 2 stars. All of his other books I give 4 or 5 star ratings. The only reason I gave it 2 stars was because I did finish it and I did not send it back. I question whether Wm Kent Krueger even wrote this stuff. The characters were poorly developed; and the parental character, Rainy was annoying; plus all of the plot turns -didn't make sense. The characters were constantly travelling back and forth to Henry Millu's cabin - I found that odd.

I love this story and the family lines within the book. want to know about annie in this book??

This is a fitting addition to the Cork O’Conner series that could be taken to lead, hopefully, to more books in the future. A must read!

I have read all the books in the series and I’m very sad to see the series end.
William Kent Krueger is a wonderful Minnesota author!

I can't wait for this series to hopefully be continued - please!!! Wonderful story and narrator.

start at the fifst and hang on to your hat. I feel like I know these people