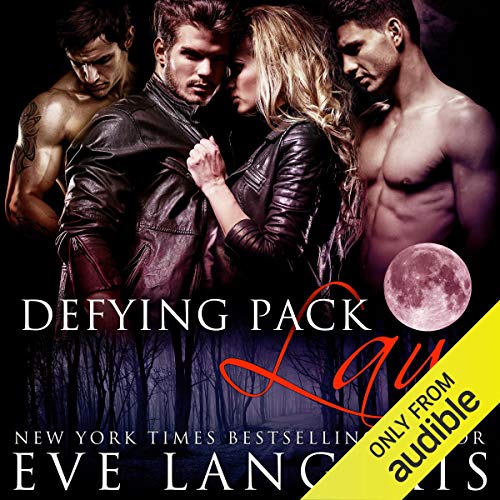 Pack Law states she must have more than one mate.

Rather than be forced into a mating with more than one man, Dana flees the pack. Flees everything she knows, everyone she loves. She lives on the run and can't seem to find happiness.

All that changes the day her first love, Nathan, finds her and brings her back home. He's not letting her go, not again. As alpha, he now makes the rules and he's decided to hell with the laws, he wants Dana.

Except Dana's changed since she left. Maybe the pack ways aren't so bad after all, and when she decides to accept fate...she finds love times three.

The story was okay, though the primary male lead came off as a pretty immature jerk.
There was a much bigger problem with this audiobook; the narrator read as though she knew how to pronounce the words, but didn't know the meaning, sprinkling pauses and emphasis randomly. I'm actually sorry I listened to the whole thing as it left me feeling very irritated. I keep lists of authors whose books I 've either liked or disliked. This is the first time I'll note a narrator to avoid.

I could not finish the story, the voice is horrible!! I will not be getting stories with this narrator.

Did not kid the voice of the reader.

The persons voice did not make me want to hear any more I only heard a few sentences before I had to stop.

I couldn't finish it

I listened on and off to this story up to around mid syory. The story so far was ok, but a torture to listen to. I couldn't continue.

I got about two minutes in and I couldn’t take it anymore. I could not listen to a woman who sounds like a grandmother read this book. NOPE NOPE NOPE.

Do not like this narrator !!!!! Story ok but the voice made it hard to listen to .

This is the first of the pack series that I have read. I figured it would be good because I have read the freakin shifter series from this author. Whew. It was scorching. A couple twists I did not see coming, and some I did. Super steamy, will possibly make you blush. The narrator did a good job, and once I got used to how she vocalized the male voices it was a easy listen. Overall, awesome listen.

I thought this was a good book but the narrator's voice grated on my ears. She tried to use different voices for the characters but they sounded too similar and not appealing. I did enjoy the story line.

not a compelling story

Do not spend your money on this. Borrow through Audible Escape.
Sigh. Just couldn’t connect with these characters. Dana’s flip from refusing multiple mates to insisting on them didn’t work for me, or else why hide from them for 12 years?
Soudek doesn’t work for me as a narrator.
This is rated 2 stars for It’s Okay.