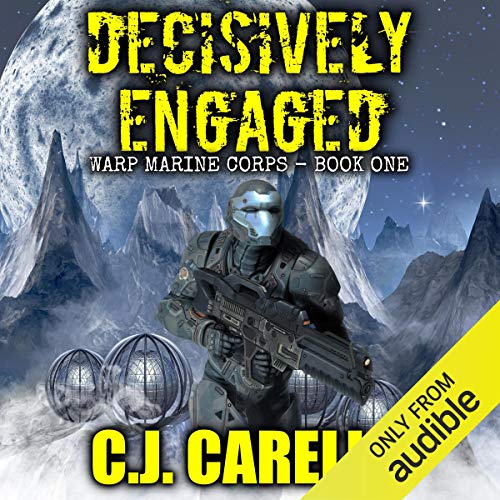 They picked a fight with the wrong species.

"A Nation at War": the United Stars of America. Born in the conflagration of unprovoked alien attack, the newest entrant to galactic politics took the few crumbs of hypertech gifted to it and ran with them, soon expanding over dozens of star systems and establishing a wide trade network, protected by its powerful Navy and the dreaded Warp Marines.

"A Fight to the Death": a single Marine platoon, tasked with protecting an embassy on a hostile alien planet. An embassy - and the human enclave around it - that soon finds itself surrounded by armed mobs. Can the Marines and a ragtag band of civilian and Navy personnel survive long enough to be rescued?

Good military scifi, but the government is casual described as a more benign 1984. US Constitution is trashed, but not to worry the leadership has your best interests at heart. Dissenters are sent into internal exile, government is a kind of Theocracy with religious affiliation mandatory. Author is a bit sketchy on all the details, but liberals made the reactionaries do it. If you get your politics from Fox News and your history from O'Reilly it will fit right in with your world view. If your world views are a bit more nuanced and your religious views are laissez faire it's kinda scary to have the Constitution dismissed as the work of liberals. Other than that he has an interesting take on space warfare, though I'll be damned if I can figure out what they fight for--certainly not freedom, liberty, or the pursuit of happiness. Yeah I paid attention in class.

Wow, What a pleasant surprise!

Let me say first that this is not my normal kind of Science -Fiction book. I am usually far more interested in the works of China Mieville, say, or a new discovery of my own. This book was popping up on occasion however when I had the time to delve, and I gave it a shot. I am really glad I did! Far more depth and realism in this book than any, "Oh, look I solved an obvious puzzle and poof I have a spaceship" carp await you in here. I did check the Amazon reviews and yup, apparently the gun stuff is all right and tight, and the military is fully believable and there are even characters!! Whom you will find yourself wondering what happens to, instead of flat, two dimensional cut-outs..and best of all is the clever idea the author has regarding "warp", which I found both funny and creepy but not silly! An excellent book and hint..the second one is good as well and there's a third out too! A finished trilogy! (I guess?) That's a prize right there!

With the wealth of military sci-fi today, it could be easy to get lost in the crowd. With the Warp Marine series, it has such a great premise that this doesn't happen. It's back story is reflected throughout, and its not such a far fetched idea.

In the not too distant future, Earth has it's first alien contact with not just one, but two, alien races, the Risshah and the Hrauwah. The problem with this? They are fighting each other as the come into Earth's area, and the Risshah are genocidal to other species, so decide to clear Earth off while they're at it. Bombing the major cities of the planet, they are only stopped from killing all humans by the Hrauwah destroying their ship.

The US, on the far side of the planet when the bombing started, get a bit less damage than Russia and Asia, and they end up as the representatives of Earth with the Hrauwah. Feeling guilty they led so much destruction to Earth, they help the US jump forward technologically to be able to join galactic society. Its a big, nasty universe, though, so humanity's talent at fighting wars comes in handy, as does humanities unique ability to be much less adversely effected by traveling through Warp space. This allows the formation of the US Warp Marine Corps, which use specialized warp platforms to warp onto enemy ships and take them down from the inside. This is the universe the story starts in, 160+ years after first contact.

After being scapegoated for a battle that went badly, Captain Peter Fromm of the USWMC is reassigned in quiet disgrace to the backwater planet of Jasper Five, a client state of the US. Peter is to command the US embassy Marine detachment, not exactly a glamour role. It's supposed to be a quiet place to keep him out of sight. Unfortunately, it will be anything but. The population on Jasper Five, which has a rigid caste system, is being pushed, backed by the Lanark, another alien species that hates humanity, to rise up, rebel and kill all the alien outsiders. It also doesn't help the ambassador is a coward and not too bright.

As tensions ramp up, Peter is assisted by intel from Heather, a CIA agent working in the embassy staff, who is dedicated to keeping her fellow Americans alive as well. Things blow up when the ambassador insults the queen, which has the effect of turning the population, supported by their army, loose on the outnumbered Americans. Being supported with alien weaponry, what should be an easy to put down rebellion is a fight to death in the vein of Rourke's Drift and Little Bighorn, and if the American's want to avoid annihilation, they're going to have to use every trick in the book and every bit of their cunning to survive. What happens at the end shows that this is just the beginning for humanity, with it's very survival at stake.

The book introduces us to a variety of characters, and they are well written, three dimensional characters. Peter Fromm is the perfect example of this. A dedicated, hard working Marine, he is dumped in the deep end on whats supposed to be a backwater, and rises to the challenge. He makes mistakes, which results in troops dying, but this is written like real military combat, and that is just a fact of war. He is willing to make the hard choices, even knowing his people may die. Heather is another excellent character. Smart, determined, sneaky and cool under pressure, she makes an excellent secret agent. She too comes across as competent and real, someone you can empathize with. There are various enlisted Marines we get to see develop as well, including my favorite, Russell Edison, who is always looking for a side hustle to pad his wallet, but is the guy you definitely want in the foxhole with you. The secondary characters get quite a bit of time as well, and are developed nicely in line with the story.

The world building is excellent as well. The changes to Earth culture based on the traumatic first contact are interesting, with the US going to a much more pragmatic system, with compulsory military service for every citizen, and a much more powerful president than before. The various worlds and polities of aliens are interesting, with some allying with the US, while others would love to see all humans, who they call warp demons, consigned to death. It's a hostile universe the author creates, with wonders side by side with the worst barbarism. It's easy to sink right into the world he created.

Tha narration duties are ably handled by Guy Williams. He does an outstanding job bringing the various characters to life, giving them each their own voice through creative use of tones, cadence and accents. His narrative pacing is excellent, really keeping the story moving, never dropping into a monotone. He's just the right voice for this series.

Any time you go into a new series, you never know what your going to get. What you get with this series debut is an action packed thrill ride with excellent military action, great character building and an expansive universe with which to expand the story. Tight plotting and pacing are also a plus. Any fan of military sci-fi should find something to enjoy in this story.

Oh what a Guy!

This listen was tinged with just enough imagination to feel it was a reality just around the corner. The different military types were well developed and believable, No super bionic or cyborgs needed. The politics were disappointing because they hadn't improved from today's smarmy, corrupted, self serving bodies. But the narrator Guy Williams was great. He kept the action moving, no lulls. He gave depth to the characters and gave each his own easily recognized persona. He is definitely on my top ten narrators having just rendered a great performance that increased my enjoyment of Decisively Engaged.

enjoyed the hell out of it. i didn't really see any downside. the universe in which it was set is very nicely designed and very detailed, great read.

Fantastic Introduction to the series

I first heard of a guy named CJ Carella 21 years ago in high school when we acquired the newly released Juicer Uprising. I only recently found out that he had a series of novels on Audible and I'm so glad I did.

I was completely hooked by the prologue. LDS traveling the galaxy, converting aliens and serving as Murder-Shepherds is brilliant. Russet the lovable evil Marine might actually be my favorite character in the book. And Space Puppies! Frickin' Space Puppies!

Guy Williams narration is great. This is the first book I've heard him narrate and I'm looking forward to hearing more.

Highly Recommend this Book!!! Will be checking out other Books from series and Author... If you enjoy Ground Pound Military SciFi get this Book

I may get hung up on details. But, the author is not consistent on his use of units. Overall a good science fiction book.

Started off Slow -and then ground to a halt -

What disappointed you about Decisively Engaged?

Let me count the ways

Its difficult to review a negative. I got the book because it has been so long since anything worthwhile has been offered. (Read here - Desperate) I should have known better