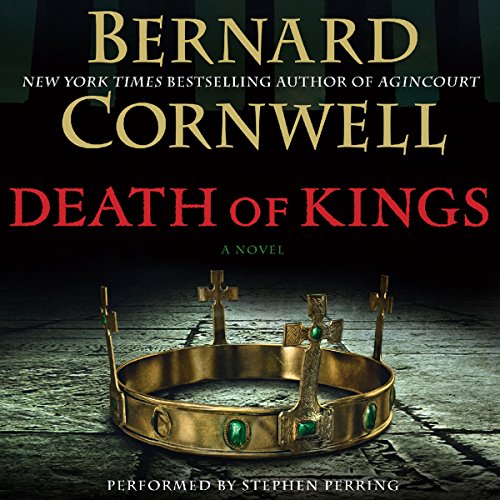 The fate of a new nation rests in the hands of a reluctant warrior in this thrilling sixth volume in the acclaimed New York Times best-selling Saxon Tales series.

As the ninth century wanes, Alfred the Great lies dying, his dream of a unified England in danger and his kingdom on the brink of chaos. While his son, Edward, has been named his successor, there are other Saxon claimants to the throne - as well as ambitious pagan Vikings to the north.

Uhtred, the Saxon-born, Viking-raised warrior, whose life seems to shadow the making of England itself, is torn between his vows to Alfred and his desire to reclaim his long-lost ancestral lands and castle in the north. As the king’s warrior, he is duty-bound, but Alfred’s reign is nearing its end, and Uhtred has sworn no oath to the crown prince. Despite his long years of service, Uhtred is still loath to commit to the old king’s Saxon cause of a united and Christian England. Now he must make a momentous decision, one that will forever transform his life... and the course of history: take up arms - and Alfred’s mantle - or lay down his sword and allow the dream of a unified kingdom to fall into oblivion.

Great story. Terrible reader. Very disappointed in the performance. And the director even more for allowing it to happen. Love the series though.

I've read ALL of the Saxon Stories available as of 7/6/2015 and have loved every one!

But, there are a few problems:

Cornwell includes notes in his books at the very end. For some reason, the author's notes aren't read on the recording at the end of the book or, at least, not consistently! Can you really call the book "unabridged" at that point?! :)

Also, if you sail into "fjord", it's pronounced "fih-YORD", If you fight Kjartan The Cruel and refer to him as "kih-JAR-tin" then you've successfully distracted me from my listening pleasure. I then stop listening and choose a few select words for the reader/performer, his engineer, the producer...all of you!

Absolutely, this series is amazing. I can't wait to read the next book as well as his other series.

What was one of the most memorable moments of Death of Kings?

The culmination before the ending.

I think Stephen Perring did excellent if I had listened to this book individually and not listened to all of the other books. The same reader read the first few books and they have had different readers for the last couple. Stephen's probably fell in the middle of the readers. I understand that it must be difficult to keep the reader consistent; however, I think the new reader should at least listen to one or two of the other books so that the pronunciations stay the same. In this book the characters names (including the city the main character is from) and several of the city names had different pronunciations.

A new narrator changes the name of Bebbanburg

I love this book series, but the effect of having narrators change frequently has taken a new twist with this book. Stephen Perring's narration is OK, although it's nowhere near as good as Jonathan Keeble's colorful storytelling. On the other hand, Perring managed to do something that no other "substitute" narrator has done yet in this audio book series. He radically changed the name of Uhtred's ancestral home, Bebbanburg. In Perring's rendition, it became "Bambra." The new name is so obviously different from what I have come to expect, while listening to the prior books, that after hearing for the first time, I had to do a quick fact check to make sure that Bernard Cornwell, the book's author, is not responsible for this turn of events (e.g. perhaps, the name of the Bebbanburg castle was changed at the time covered by the Death of Kings). No, Cornwell kept the name intact. It's Mr. Perring's creative narration that takes the credit for the revision.

What made the experience of listening to Death of Kings the most enjoyable?

The story alone. It was hard listening to this unenthusiastic narrator. His mispronunciation of words was extremely annoying. It always took a moment to realize what or whom he was speaking of.

Who would you have cast as narrator instead of Stephen Perring?

Johnathon Keeble hands down. ALL the other narrators left much to be desires

If the narration had been better I would say yes, but it was hard just getting through the book at all. I was so caught up on the narration that I often had to rewind to hear parts again.

What disappointed you about Death of Kings?

The narrator, was so off in his timing it made it un-listenable. turned a gripping compelling adventure and ruined it for me.

Who would you have cast as narrator instead of Stephen Perring?

Jonathan Keeble. when he narrated the story, it was an adventure like an action packed movie, could not stop listening.

Since keeble has left as narrator, this series has turned into just a story as opposed to an action packed adventure that had me hanging on every word, the characters were so real

Don’t like the new guy’s voice or how he changed how names were pronounced. Wish the guy that did the 1st book did them all!

They have changed narrators too many times.

I continue to change narrators throughout the series, and all the narrator's pronounce the names and locations differently which makes it hard to follow.

If you haven't listened to earlier books in this series you may not be disappointed withis one however I hated the narration. Almost no distinction in voice for each character, seemed very dull in comparison to earlier books in the series naration and I hated the way the old English town names had been changed to modern. I found it hard to listen to since I love the author and all I could do was think about how I hated the naration and unnecessary changes. And to top it off the historical notes at the end of the book were missed.

What was one of the most memorable moments of Death of Kings?

The best parts of these books are Bernard Cornwell's fabulous one liner wit and also the description of the battle scenes are very vivid.

Mainly disappointment due to the naration differences from the earlier series books. Difficult to follow the story with such monotone reading and I wanted to scream every time Uhtred came from Bamburgh and not Bebbanburg

Why the changes. I was so excited to see the book in Audible, I can't say I regret buying it since I love the series so much but was left feeling cheated, what a shame.

You really should make an effort to make sure the pronunciations of people and places are at least similar, it makes the story hard to follow and takes way from the magic :(