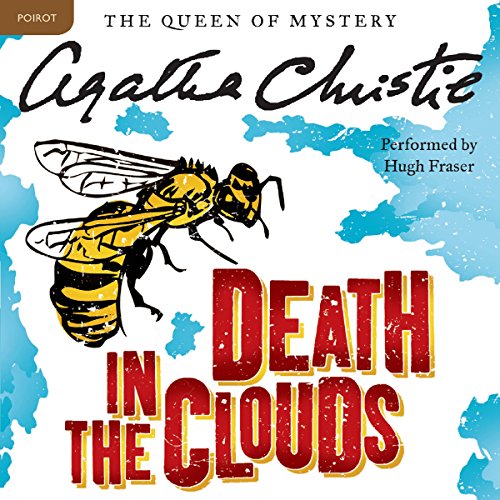 Death in the Clouds

From seat number nine, Hercule Poirot is almost ideally placed to observe his fellow air travelers on this short flight from Paris to London. Over to his right sits a pretty young woman, clearly infatuated with the man opposite. Ahead, in seat number 13, is the Countess of Horbury, horribly addicted to cocaine and not doing too good a job of concealing it. Across the gangway in seat number eight, a writer of detective fiction is being troubled by an aggressive wasp. Yes, Poirot is almost ideally placed to take it all in - except that the passenger in the seat directly behind him has slumped over in the course of the flight ... dead.

Murdered. By someone in Poirot's immediate proximity. And Poirot himself must number among the suspects.

This title was previously published as Death in the Air.

I love these Christie mysteries read by Hugh Fraser - he is wonderful. This outing has Poirot on an airplane trip from France to England when a fellow passenger is murdered on board. Like an isolated house mystery, those present are all suspects, and they are the only suspects. With the company of a British and French police inspector and the help of some fellow passengers, Poirot manages to sniff out the murderer. Oh, and along the way he plays matchmaker to two lonely passengers -- so in the end, all is well.

excellent, as are all poirot centric audiobooks.

see title. the narrator does a tremendous job on these, very skilled, mixes accents with nary a mistake.

I have enjoyed listening in chronological order. Makes the stories easier to follow as there is reference to past cases.

Not the best Poirot. A bit draggy in the middle. Does the trick if you are looking for a mystery, but wouldn’t be my first recommendation.

What made the experience of listening to Death in the Clouds the most enjoyable?

The story was straightforward enough. A person dies on a plane, one of the passengers must have done it. There were many complicated motives and possible solutions, but in the end Poirot manages to ignore all the distractions and focuses on what really matters.

What was one of the most memorable moments of Death in the Clouds?

The revelation of the murderer's identity. Forgive me I cannot further elaborate

What does Hugh Fraser bring to the story that you wouldn’t experience if you just read the book?

The voice of Poirot. I used to read Christie's novels until recently I started to listen to them. Hugh Fraser brings Poirot's French/Belgian side of the character to life. As I have limited exposure to French, I cannot but imagine Poirot as the typical English gentlemen. Hugh Fraser gives me a more complete illustration of Poirot's character

Listen carefully. I listened to this story while my sister read the book. Poirot at early stages of the book finds out who the murder is by looking at a list of items carried by the passengers. If you really want to try to solve the murder yourself it may be worth searching for the list online - after all, listening to a list of items may not be the most enjoyable experience.

Lots of suspects, a series of clues and misdirections, plus a couple of love affairs and still Poirot is triumphant. Hugh Fraser's renditions of the Poirot stories are the absolute best.

I had a great time listening to this book. I do miss Hastings but so glad that Hugh Fraser is the narrator!

What made the experience of listening to Death in the Clouds the most enjoyable?

Hugh Fraser never disappoints. This is another excellent Agatha Christie mystery. I tried so hard to figure it out but was still completely in the dark up until the last 5 min. when it was explained. An excellent read!....er, hear!

I tried so hard to figure it out but was still completely in the dark up until the last 5 min. when it was explained. Several of what I thought were "clues" never came into play.

He is so consistent with his voices throughout the books. I know who is talking now just by the voice. I really appreciate that because it helps the book become more real and easier to follow.

Sensational murder on an airplane

Another great and puzzling installment in the Poirot canon. I had correctly identified the murderer early in the narrative, but had absolutely no idea how or why it was done, nor could I follow some of Poirot's methodical steps to solving it. Sensational crime, and sensational solution revealed. Once again, fantastic performance by Fraser.

its another good one that has you guessing until the end. love the way she writes. fun read