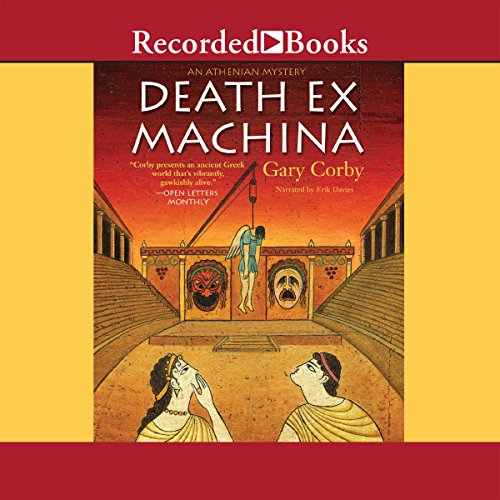 It's the time of the Great Dionysia, the largest arts festival of the ancient world, held each year in honor of Dionysos, the god of wine. But there's a problem: A ghost is haunting Athens's grand theater. Nicolaos and his clever partner in sleuthing (and now in matrimony), the priestess Diotima, are hired to rid the theater of the ghost so that the festival can begin. With the help of Theokritos, the high priest of Dionysos, they exorcise the ghost publicly while secretly suspecting that a human saboteur is the actual culprit. Their efforts to protect the theater fall short when one of the actors is found hanged from the machine used to carry actors through the air when they play the part of gods. It's quite a theatrical murder. As Nico and Diotima dig into the actor's past, they discover all was not as it seemed. There are enough suspects to fill a theater. As the festival approaches and pressure mounts on all sides, can they hunt down the killer in time? Or will they simply have to hope for a deus ex machina?

Another Crime Adventure for Nicolaus

I continue to enjoy the soothing voice of the Narrator. The character Nicolaus at times sarcastically pokes fun at the 'religious rites' of the Roman era in which he lives. This time, we are let into the Arena, as it were, of the Theater Actor. Although I enjoyed the variety of characters, and Nicolaus playing the new role of husband, getting to know his new family, and solving crimes with his new wife, my ear tired of the amount of male characters. Sometimes, the voices were so subtle, that I lost track of who was speaking. Maybe at this point, the Author should think about adding other voice actors to his stories. At least three to four chapters were used to explain how the principal characters were involved in the crime. I admit that I grew fatigued at the summation. However, overall, I would still listen to the next installment.

I have read the previous four books and I liked them a bit better. I am not likely to listen to a Corby book again based on the pronunciation. The Aeschylus in Aeschylus is pronounced ‘esk.’ At least that is the way my professor in Greek tragedy pronounces it. As do the pronunciation guides on the web. The reading would have been fine, but I cringed every time I heard the narrator butcher Aeschylus’s name. It irritated me beyond belief.