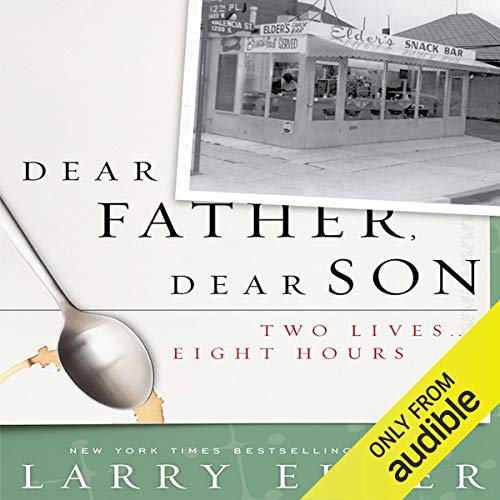 Dear Father, Dear Son is a personal memoir of Elder's troubled - one might even say tortured - relationship with his father, and the astonishing outcome that develops when Elder, at long last, confronts him.

Says Elder: A man's relationship with his father - every boy, every man lucky enough to have a father in his life has to figure that out. My own father? I thought I knew him - even though he seldom talked about himself. And what I knew I hated - really, really hated. Cold, ill-tempered, thin-skinned, my father always seemed on the brink of erupting. Scared to death of him, I kept telling myself to find the courage to "stand up to him". When I was 15, I did. After that, said Elder, we did not speak to each other for 10 years.

And then we did - for eight hours. The result can't be described. It has to be experienced.

As reflected in the book's subtitle - Two Lives...Eight Hours - one extraordinary, all-day conversation between Elder and his long-estranged father utterly transformed their relationship. It is no exaggeration to say the book will likewise transform listeners.

Indeed, calling it stunning, Burt Boyar, co-author of the best-selling autobiography on Sammy Davis, Jr., says of Dear Father, Dear Son: "Above all it is a wonderful read. I am tempted to call it a page-turner but in my case I hated to turn every page because that meant I was getting closer to the end and I did not want it to end.... The book is filled with emotion. It is, of course, a handbook for life. I guess it is that above all things. Any kid who reads it and follows the advice of how to live his life just has to come out well."

Dear Father, Dear Son is the story of one man discovering a son he never really knew. And of the son finding a man, a friend, a father who had really been there all along.

This book had me second guessing my relationship with my own father, and provided a different perspective on motives behind actions and perceived slights. Not that it took the book to point these out, but it was refreshing to see someone else with the same take/epiphany. Regardless of where my relationship with my dad stands, I'm indebted to him for sticking around and being a father. This is a beautiful story of a father and son finally coming to know and understand one another, a story of hard work and overcoming adversity. I loved every minute, and the narration couldn't have fit the story any better. I listened to this back to back, and have shared with many people how much I enjoyed this story and performance.

I love the way the story was told in flashbacks from Larry Elder's growing up years, his father's harsh youth, their eight hours of conversation, and finally an heartfelt epilogue. A treasure of a book to help understand how families work and sometimes don't work well. Thank you, Mr. Elder, for writing an honest book.

I have always related to the brilliant articulate Larry Elder on talk radio.
This book which I listened to on "Audible" was engaging, beautifully crafted, sensitive, profound, instructive, entertaining, and often funny.
Larry succeeded in bringing me into his family, what it was like growing up in his family, and particularly with his dad.
I could really understand how his dad was both abusive and noble.
I also could internalize that black families have to deal with the ups and downs of life just like white families, but then also have to deal with the challenges of being black that exist.
I have to say that Neal Ghant is flawless in his recitation. He is a master. Couldn't be better. I recommend this book to everyone, and especially those who have enjoyed listening to Larry Elder as I have over the years.

Oh Larry - this journey of yours was so amazing. Thank you for sharing it with us. I remember listening to your shows everyday and especially the Chief Justice on Fridays. Since those days I've become an Elderada and listen religiously! You are so smart and so engaging! Thank you for being you!

I absolutely loved the book. The narrator also did a great job!

So well-written, you cannot stop.

Once I started, I was compelled to finish it--laughing all the way. Haunting, melancholy moments followed by side-splitting scenes from his past or his father's propel you through chapter after chapter. Reaching the end of the book left me with two competing reactions: sadness that it was over and gratitude that I was now armed with a new perspective for viewing and reviewing my own relationships--all of them.

Captivated, hooked from start to finish

This is a touching book that connects with the reader on a deep, almost spiritual level. A raw story of how we can all become better people, regardless of family history or background. Mr. Elder and his family are national treasures. Thank you for exposing some of the flaws that I have as a father, husband and brother and for showing me that there is redemption for those that seek to find it (without making excuses).

Larry's parents are a mix of my parent and grandparents. His father reminds me a lot of my father minus the beatings. Another great book from Larry Elder

take a bow mr elder, take a bow. this was great! it’s so relatable to my own parents and how they raised us. it’s so well written and read i felt constantly engaged. if you’re a larry elder fan then you owe it to yourself to hear his story. when a story makes you feel anger, laugh, and cry, you know it’s touched you. whole heartedly recommend.

I picked this book because I was initially intrigued by the title and am familiar with Larry Elder.  To be honest this is one of the best books I have read this year.
Larry's father tormented him and his brothers growing up. They constantly walked on egg shells as kids, dreading the abuse that was immanent with their dad's mere presence. At 15 years old he and his father have an argument which led to them not speaking for ten years. One day Larry (at this time an attorney) built the courage to confront his father for the torment of his past...what happend was an eight hour conversation that changes both of their lives. This really is a great story that I think everyone can appreciate and take something away from.