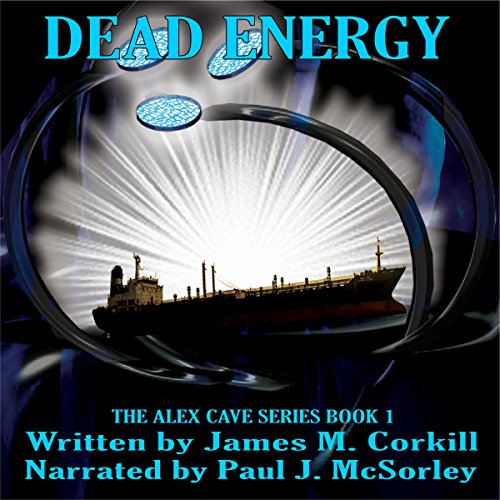 Alex Cave is leisurely cruising his sailboat in Puget Sound when a hysterical voice on an oil tanker begs for help on the radio! He sees the behemoth ship through his binoculars an instant before it is engulfed in a brilliant flash of white light, and when he responds to the mayday and arrives before the Coast Guard, he discovers the crew and 80,000 tons of crude oil have mysteriously vanished without a trace!

Alex Cave is just a geophysics teacher for a university in the town of Bozeman, Montana, USA, but he is also ex-CIA. The Director of National Security, Martin Donner, is his friend, and asks him to help the Coast Guard in solving what starts out as a small problem of stolen crude oil.

Initial thoughts are of a major oil leak, but none is found. When the bodies of the crew are found frozen to death on a mountaintop 150 miles away, Alex realizes there is more going on than just stealing oil.

Things go from bad to worse as more tankers are attacked and their crews killed. The few witnesses all claim to see a bright light and a rainbow effect surrounding the tankers, but how did it happen? The Alaska pipeline and west coast refineries are suddenly empty! Transportation of basic necessities cannot reach the cities!

Alex teams up with the supervisor for the All Alaska oil Company in Valdez Alaska, a man affectionately known as Bull by his crew, and Christa Avery, a physicist working with oil samples from the Alaska pipeline. Together they try to discover why all the oil is disappearing, and the mastermind behind the theft and murders. The only clue the trio has is a strange crystal that was found in the hold of one of the empty oil tankers. Under closer inspection, it seems the crystal is alive.

Meanwhile, people in the northwestern states are trying to survive, which has now become the one rule. The AOS, Army of Survival, initially recruits people who wish to learn the skill of survival. Now that skill is becoming a fact of life, and the army starts keeping people against their wills, and training them to become soldiers. John Everex, the new leader, is a man on a mission. He rules without compassion and kills without mercy. As one would expect, Everex and Alex's paths cross, with dire consequences for one of them.

Harold Woolley is a meek man, with a demanding wife and two teen age children. He becomes caught up in the struggle to survive, and mistakenly ends up at the AOS camp. When his lack of courage threatens his family, he tries to become the brave man needed to get them out of their desperate situation, but after being a coward his entire life, he doesn't think he can change.

Each episode has one common thread tying each story into a series, but each episode is a new story, and can stand alone.

Indiana Jones in the modern day

Dead Energy is not a by the numbers kind of book. In fact, it kind of shifts gears a few times in various genres; the book is almost a new genre for every third of it you read. The funny thing is, is that it works. Wild and weird this series is like Indiana Jones with a scientific bent, rather than the religious aspects.

Indy, or rather Alex Cave is the hero/protagonist. A humble college proffessor (hmmmm), who just happens to have worked for the CIA, is called upon to investigate some mysterious happenings regarding some oil. Oil that is gone, and what it could mean to the world. After a brief convo in D.C. he finds himself looking for a crashed plane. Cave then has to fight one of those crazy militias, and when he is done there he ends up at Area 51. I won't say more, because as the story progresses things get crazier and crazier and I do not want to spoil anything. Suffice it to say that there is plenty of action and that Dr. Cave is a cool charismatic character that you will enjoy.

McSorely is an awesome narrator, and he owns Cave. He nails the rest of the cast, too, but man is he ever Cave. His battle scenes are spectacular and you can almost feel the bullets zip by your head. I really appreciate his style and his work has never failed to impress. This cat can tell a story. Even though I did receive a promo code for this review it in no way influenced my considerations of the material, and in fact, inspired me to be more honest. In fact, getting a code generally makes me harsher as a reviewer as I am more often concerned what someone like Me will decide based on my review.


If this review helped, please press the YES below. Thank you immensely!!!

Excellent book, hard to put down

Excellent book, hard to put down. Can't wait to read the next one in the series. I understand each book gets better as you go.

Would you listen to Dead Energy again? Why?

Good story. I would listen to it again to pick up parts I may have missed.

Paul does a great job with this book. You can always tell what character he is doing and the flow is good.

I listened to this book on a day trip to my cabin and finished when I got there. Exciting and makes you think about how fast the world would fall into chaos if something like this were to happen.

Great book and can't wait for the next one!

Typically I stay far away from books that are classified Sci-Fi, but was attracted to this one due to the narrator. I am so glad that I listened to this book! I would classify this listen as a thriller, with small amounts of Sci-fi. James M Corkill really impressed me with the character of Alex Cross and the vivid imagery in this book. I can't say enough good about it. Paul J McSorley performs this book spectacularly. He gives the various characters distinguished voices, so I know exactly whom is speaking. Also, his emotions and expressions are very realistic, and add to the enjoyment of the book. I requested this review copy audiobook and have voluntarily written this review. I will definitely listen to more books by this author and narrator. I am so glad that I tried something outside my listening genres.

If you can take a leap of faith and combine sci fi fiction with an end of days saving the world story it’s a good book.

The narration is great.

This was a really good book. The narrator done a great job telling the story with the various characters. The idea of no fuel brings worst out in people and this book points out some good examples along with some sci-fi add-ons. I enjoyed this book and I am looking forward to listening to the next one in the series.

Riveting to the end

My husband and I listened to this together. He's the sci-fi geek and I'm a fan of Paul Sorley. To me this had a Walking Dead survival feel to it, only replace zombies with aliens. Throughout the book you'll wonder how the individual stories tie in, but they all come together in the end. The concept is intriguing, the characters interesting. The most interesting to me was Harold, the meek man controlled by his wife. I could just feel throughout the story he would only take so much before stepping up, and what is up with his son and his obsession with guns? My husband's first comment when the story was over was, "Is there another book?" I guess he really liked it. I highly recommend this story to anyone who likes sci-fi.

No Rest for The Best!

I love how the main character thinks he can have a simple life as a college professor. As someone who has worked in academia, I can assure you that’s not the case. The plot has lots of twists in it! It then becomes a spy thriller. Great listen!!!

I liked the concept of something vaporising all the oil in the world - as an environmentalist, this concept alone was intriguing. The story keeps you guessing and I couldn't predict the ending: I appreciate a book where I can't predict how it's going to turn out and not all achieve that!

It's been a while since I've listened to, or read much real Sci-Fi, but this story reminded me what I used to enjoy so much about the genre. The book is well-rooted in a reality that we can all readily identify with, so the leap to the sci-fi part is easily made and that makes the book engaging. The book also has good characterisations

Yikes and Wow! Did not see that coming!

A frighteningly plausible crisis with an out of this world explanation. Great action and twists to keep you entertained along the way. Well worth a listen!