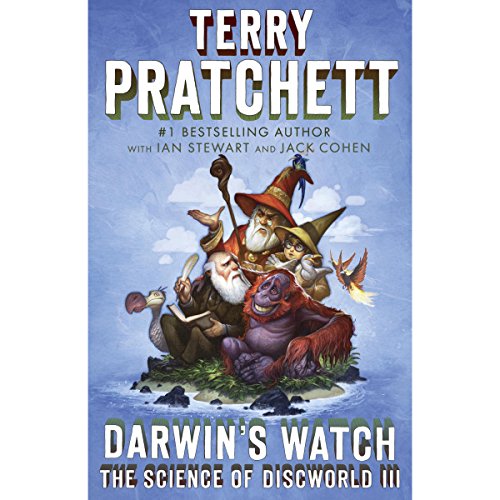 The wizards discover to their cost that it's no easy task to change history.

Roundworld is in trouble again, and this time it looks fatal. Having created it in the first place, the wizards of Unseen University feel vaguely responsible for its safety. They know the creatures that lived there escaped the impending Big Freeze by inventing the space elevator - they even intervened to rid the planet of a plague of elves, who attempted to divert humanity onto a different time track. But now it's all gone wrong - Victorian England has stagnated and the pace of progress would embarrass a limping snail. Unless something drastic is done, there won't be time for anyone to invent space flight, and the human race will be turned into ice-pops.

Why, though, did history come adrift? Was it Sir Arthur Nightingale's dismal book about natural selection? Or was it the devastating response by an obscure country vicar called Charles Darwin, whose best-selling Theology of Species made it impossible to refute the divine design of living creatures?

Can the God of Evolution come to humanity's aid and ensure Darwin writes a very different book? And who stopped him writing it in the first place?

“An irreverent but genuinely profound romp through the history and philosophy of science, cunningly disguised as a collection of funny stories about wizards and mobile luggage.” (Frontiers)

“[Pratchett alters] history with such brilliant effortlessness...it all gels into a cohesive and exciting whole - which demands to be both read and enjoyed. For anyone looking for something fresh or even more off the beaten path than Pratchett’s own ‘Discworld’ universe, one would be hard pressed to find a better pick than this.” (ScienceFiction.com)

The switch between the Discworld and our world is handled flawlessly. Whether it's the Wizards or the scientists of our world Terry Pratchett weaves a spellbinding tale that will leave you laughing and thinking. The narration is superb and draws you into the story in a way that's different than if you were reading it yourself. I've reread all of Mr Pratchett's books many times over. If you do not listen to his audiobooks you are cheating yourself out of a unique experience.

This offering in the Science of Diskworld series is fantastic! Greatly entertaining, well paced, and with enough Wizardly involvement to keep it light and fun. It's a stand-alone novel, so no worries about 'must have the previous books.'
Enjoy!

Last science chapter was a little colonialist (awkwardly pro-British and full of plaint savor how awesome British schooling USED to be, but world is ending now because it isn't the same, etc ad naseum) but can be ignored in the overall scheme of how awesome the rest of it was.

not your typical discworld

I must admit i had trouble with this book.
it had me snickering at times but it's not a comedy in line with the actual discworld series. I havent yet finished it but suppose I will at some point.
the book still gets top marks from me as its well written and performed and the fault lies with me not fully understanding the book I bought expecting the traditional discworld hillarity.

Simply the finest third part of a trilogy of popular science books based on Discworld that money can buy.

This was great although I'm sure I still don't understand quantum physics...it was 👍 tho

It's a good book in the series, but I would rather hear more from the wizards and less from the scientist.

Minds are well and truly blown!

more of an essay with a little Terry Pratchett

I believe that science proves the existence of a higher being and this book seemed to be aggressively against the beliefs that science and god can both exist, that if you believe in one that you can't believe in the other. Why can't the big bang and evolution be the mechanism used by God to create the world? If you don't believe in God that fine, but don't make it seem like I don't believe in science b/c I have faith.
Perhaps I was in the wrong frame of mind when I read/listened to this but that was the impression that I got. I should also say that I stopped listening after the 3rd chapter b/c of this impression. I love Terry Pratchett's work, I accept that he was an atheist and I'm fine with that b/c he was a brilliant writer and he makes me laugh. This wasn't a story so much as an argumentative essay with bits of Terry Pratchett's writing inserted into it.