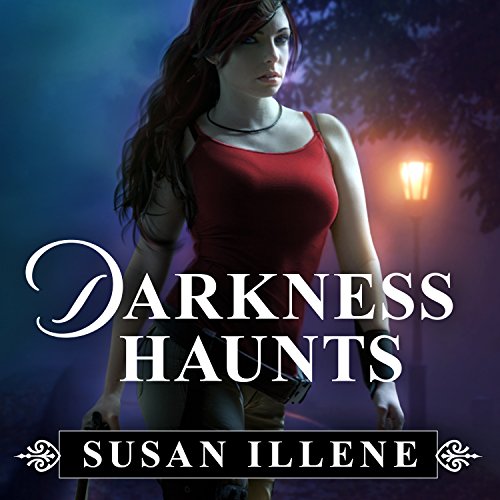 Melena Sanders faced her fair share of danger with insurgents and terrorists when she served in the U.S. Army, but now she is about to go up against a new threat. Her best friend, Aniya, has disappeared while on a trip to Fairbanks, Alaska - a supernatural haven. Most humans have no idea darker races lurk amongst them. Mel knows better. If she wants to get her friend back, she's going to have to go in alone - but not unarmed. Melena has a few special skills the Army didn't provide, but the odds are still against her. And danger likes to play it rough. A war for power is about to rise in Fairbanks, and if she wants to get Aniya back, Mel is going to have to step right into the middle of it.

I took quite a while before deciding to give this new series a chance. There' are no regrets whatsoever. I thoroughly enjoyed this first book in the series. Melena Sanders is a very courageous heroine. She is loyal and got herself into a lot of trouble by going to Alaska to search for her missing best friend. She used her special gift to find her friend who had been captured by the vampires and other supernaturals. I find the narrator, Chris Dukehart did a good job. Her voices for the different characters were easily distinguished. The plot was good.

Girly book with just the right amount of angst

Liked this a lot. A little harlequin romance with supernatural flair. Fun read for a lazy afternoon. I would recommend

Its always nice to find a series that can actually keep me intrigued enough to purchase the next book in the series. So Far Darkness Haunts has a building and interesting enough story line to keep me curious to delve into the next part of the series. I suppose it the next book will determine if the series can keep me enthralled.

This is what I mean by a worthy female lead!

Melena Sanders, ex-military, is planning to attend college in the fall in California but right now she has to track down her missing friend, Aniya. A cryptic message left by her points Mel to Fairbanks, Alaska. There she discovers a war brewing that involves plenty of supernatural folks. Not all are human friendly. Luckily for Mel, she’s a little more than human. She’s a Sensor and that gives her just enough of an edge to be a true threat to these werewolves, vampires, and witches.

This is my new favorite urban fantasy series. This book is off to a good start, introducing our main character, Mel, and the paranormal world she deals with. Her dedication to her friends is a key component to the plot for this book. In her search for Aniya, she tries to keep Lizette out of it for her own safety. However, this goes a bit awry and I’m sure these two will have some words for each other later. She also makes some new friends in Alaska, some out of necessity and others out of choice. She needs all the assists she can get as she tries to find Philip Mercer, the last person Aniya was seen with.

There’s tons of alliances in this book and some of those alliances pull good folk into bad situations while other alliances pull questionable people into doing good deeds. Things, actions, and people are not always clearly evil or good and I really liked this aspect of the book. It kept me on my toes and engaged throughout the story.

There’s a powerful magic user, Variola, who holds several witches and werewolves in fealty. Mel has to make a deal with her and she wants an ancient vampire, Nikolas, found so she can destroy him in some ritual. However, the alpha werewolf, Derrick, isn’t too happy with how things are going down. Then there’s this Nephilim, Lucas, that follows Mel around. Half the time he’s keeping her from harm and the other half of the time he’s threatening to end her life. It’s a complex relationship that involved Lucas killing Mel’s protector, Wanda, several years ago with no explanation. Just because allegiances aren’t convoluted and strained enough, things get shook up once again when Nikolas comes out of his vampire sleep. Oh, yes! Whoever decides they want Nikolas dead is going to have their hands full!

One of the main draws for me was Mel’s character. She’s not without training and life experience. She has some years under belt and has had to make her way in the world for some years. She has been honed by both joys and tragedies. In short, she knows her own mind and walks into this story knowing exactly what her goal is (to get Aniya back) and can make her own decisions on how to go about it. She’s knowledgeable about guns and other weapons and not afraid of hurting or killing, if that is what’s needed. Yeah, I want to be Mel when I grow up.

On the other side of the coin, there’s a touch of flirtation here and there. Others have told me that there’s a full romance later on in the series, so for those of you who enjoy romance, you have that to look forward to. I found the flirtations of Nikolas amusing and they added a little bit of humor to a pretty tense book.

The ending did leave me with several questions concerning Lucas and Mel’s future. She has some hard choices to make, I think, in the next book. So I’m glad that the entire 6 book series is out, ready for me to tear through.

The Narration: I enjoyed Cris Dukehart’s narration. She started off a little rough, making bullet statements, but within the first hour she smoothed out. I did like that she didn’t sound all girly, but rather as a grown woman who’s used to making her own decisions – which fits the main character perfectly. I also liked her various accents for some of the older characters. She made a very believable flirtatious 800 year old vampire.

this was really good. intense, evolving. I fell like I'm right there. I just started book 2

It was a great story and held my attention!! Would definitely recommend it!!! Enjoyed it!

Narator has no inflection...

Excellent story, good world-building - but not helped by being told mostly in a monotone :(

yes, good story line, with a new twist. Sensors. not a lot of sex to mess it up. you can just sit back ( or do the dishes) and hear a great story.

What was one of the most memorable moments of Darkness Haunts?

When the Sensor was told what happened to the lady who trained her. that was good.

Derck the wolf. comes to aid. more than once. I like him. in all the parts he is in.

no. I just did not want to turn the book off.

Listening again because I enjoyed it so much. Love the series and the growth of characters.

What made the experience of listening to Darkness Haunts the most enjoyable?

The only thing I really liked about this book was the supernatural element..

Melena and how she can track Sups

Which character – as performed by Cris Dukehart – was your favorite?

This was a book club listen for me...I was bored about half the book...and if it would have been a self picked title, I probably wouldn't have finished it, if I am being honest. Some books you click with, and some you don't...the premise was good...and maybe book 2 would be good...but I don't care enough to continue this series..there is no romance...only a few sparks of attraction and a possible love triangle thingy brewing...and I am kind of interested what will happen with Melena staying in Alaska...but really not enough to find out...maybe if the series went on sale I might pick it up...YMMV...most of my book club really liked this book!

I fell in love with a werewolf

Although I read a lot of fantasy, I don't usually read a lot which contains vampires, werewolves, witches and the lot. Still, I read it for a book discussion, and I really enjoyed it.
The characters are well developed, and the lead character undergoes some changes in the course of the book. She has some strengths and weaknesses at the beginning, but she fights and overcomes prejudices, and she takes on responsibility.
I'm not usually a fan of werewolves, but I fell in love with one here. ;)

It is a fast-paced story that gripped me right from the start. There even is a bit of a romantic interest, although there are three likely candidates, and you'll need to read the sequel(s) to find out who'll make it.

The narrator was well fitted, and did a good job with this book.