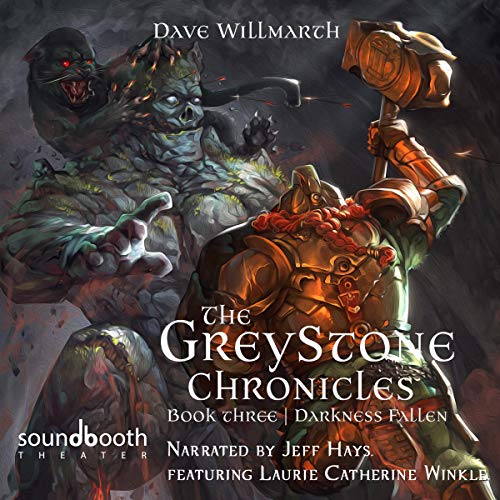 Alexander and the Greystone Guild are expanding their territory. Building up the keep, conquering new lands, and recruiting citizens of all races. And when they've prepared enough, they plan on taking the fight to the minions of the Dark One in their own strongholds.

New friends are discovered, and alliances are made. Tragedy befalls one of the group, and the Dark One's identity is finally discovered. A new yet, at the same time, ancient enemy makes itself known, threatening to change the face of Io forever.

This is the third installment in the Greystone Chronicles.

For me it was a slow start or maybe just took awhile to refresh myself to the previous books. It finished pretty good though.

LOVE IT! Refreshing take on the genre

Each book in this series gets better! Excellent balance of world building, action and character development. So well performed and love the themes of friendship, disability without ableism, inclusion and snarky humor. Worth a credit!

Another great addition to a strong series. A very interesting world is created for us to explore in this book.

Such an amazing fantasy tale! I love it. The plotline is very well-developed, the world-building is exciting and paced so well, but the characters are what raises this tale above others. Each character is unique and brings something special to the story. The interaction between the main characters is heartfelt and authentic. It truly ranks high on my list. Alexander may seem overpowered at times but he comes by it through study, practice, and persistence. The budding romance with Jules makes the telling that much sweeter. Of course, there are quirks here and there; it can’t all be perfect. Max is a Ranger, when he runs across the young black panther it made me wondered why he didn’t have a pet. The group goes on to encounter the adult female Night Prowler; the Matriarch. Jules converses with it via an empathy skill. Still, the encounter does not result in Max or the other Elf Ranger in the guild, mentioning or acquiring a pet. Druids can also have pets, of which there are at least two in the guild, so I thought the whole situation odd. The large cats the guild officers have as mounts are not used much either, aside from occasionally summoning to feed them. These seem to be overlooked opportunities by such a talented author. Other than minor quibbles, I really enjoy this series. From my perspective, Greystone Chronicles ranks in the top five litRPG series. The writing is extraordinary, the characters heart-warming and delightful, and the narrative performance is flawless. Audible, the remaining books, please!

What an awesome series. I had so much fun reading it. Can't wait for the next book.

too cute too boring

The performance, as always, was superb. With regard to the story, certain confrontations that have been building over the course of several books were resolved in a very anti-climactic fashion. Also, the epilogue appears to rehash a revelation that had in many ways already been revealed previously. Therefore, the reaction of the protagonist in the epilogue feels bit disingenuous if not downright amnestic. Other than that the writing is good, and it’s always refreshing do you hear about antics of fibble and mobs of rabid newb ganking rabbits.

Love the genre and loved the beginning but at this point there is too much stuff swinging in Alexanders favor with no loss or consequence. Its turning into a YA book where the protagonist has protagonist powers and therefore always wins everything ever and never faces resistance or permanent negative consequences. Some of the book is getting too cliche and again, protagonist is OP. Also a good 3rd of the book is very ...non linear. I didn't understand what half of what going on had to do with anything as far as his socializing with the volunteers and blah blah blah. Griffins, Dragons, a water dragon, a legendary sword and shirt, super hot girlfriend who immediately falls in love with him, nobody had a problem with him being king, multiple monarchs treat him like family, more land than a kingdom,, AND he has a super powerful wizard at his beck in call?! Come on Dave. Way too much. You lost me. Narrated flawlessly though.

Unfortunately, Willmarth seems unwilling to put reasonable limits on the abilities and progress of the main cast. I'm sure he's heard this criticism before as he seems to have made a new character in this book to raise this issue and have Alexander get angry and not really justify why his crew is so powerful so fast. If someone accuses you of cheating, it's not really a good defense to point out all the advantages you have because your dad created the game. Let's look beyond that to a more fundamental issue: there are few challenges presented to the Greystone guild that they don't have a defense against or easily overpower due to the obscene connections this group has made because of their unique skills. It's not that most of the story being in a game takes away the stakes - I've seen it work very well in many other litrpgs - it's that the losses suffered are minimal. Either unnamed NPCs get killed or someone who has been given very little time in the spotlight is killed which makes the loss ineffective. This is further undermined when characters joke about dying and respawning or go down suddenly just to be easily rescued by the nigh-deity level friends the group has made. On that topic, while you can excuse the power levels of Brick and Alexander, it's hard to believe that a person with Alexander's background is as convincing and makes friends so easily as he is when he does really suspect activities like channel spells next to royalty he's just met with a charisma score of 12. I think the cast has vastly outgrown the predominantly single-person point of view the story is being told through. If we spent more time with people not involved with Alexander, maybe some of the deaths in the game and out of it would have an impact. The one player who was harmed outside of the game just left me with a "who?" question because, while his group was familiar, it was because of everyone else in it except him. If the story is to have emotional stakes, the person lost can't be the one with the least character development. Hell, even Max, one of the primary party members, is barely developed beyond humorous greed and being an Archer with two skills.

This could be a masterpiece but the women all act like immature “adults” but the men are all mature and smart. It’s super annoying so I just skip 10 seconds ahead when Sasha opens her mouth. Sort of feels like the author has never been around women. Feels like the 40 year virgin wrote this....LOL. Other than that it’s a great story just have that skip button ready.