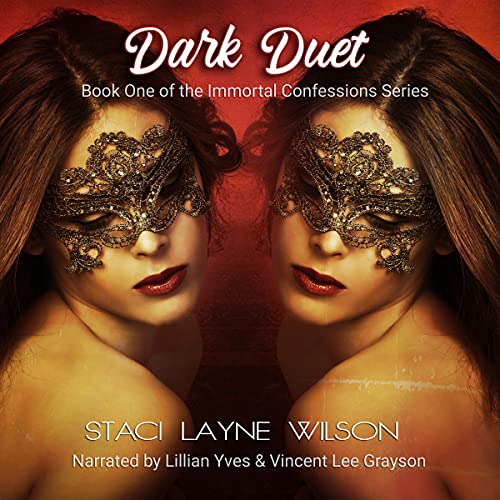 Ashara Konrad, rock music photojournalist and vampire, has a secret. One she hasn’t spoken of in over a century.

Now, that secret has come back from the grave, hell-bent on destroying the most promising musicians of the age in service to an old voodoo curse.

If Ashara hadn’t seen her vampire twin, Zariaz, dismembered and scattered after going on a killing spree, targeting musicians a century earlier, she would think Zariaz was behind the slaughter, looking to fulfill her 1000-musician curse.

But it takes more than dismemberment to keep a bad vampire down. And this time, Zariaz is looking for revenge against the twin who betrayed her and the musician she's in love with.

Will Ashara be able to keep her new love safe from her deadliest secret? Or will he become the latest musician to feed Zariaz's curse?

Dark Duet is a haunting and lyrical vampire romance, set in the music world, during the Age of Aquarius. The author, Staci Layne Wilson, is the daughter of a rock star and pin-up model. Her own travels and upbringing in the music world help weave a rich tapestry for this series.

Ms. Wilson is a new author to me. I had the opportunity to listen to the audiobook courtesy of a promo code. This storyline and character development was amazing. The flow was easy to follow and kept me interested. I fell in love with the characters.

The narrators Lillian and Vincent voiced the characters giving life to the story. I appreciated hearing Lillian voiced the female characters and Vincent the males. It enhanced the book tremendously. I loved Vincent's deep and sexy voice. I am excited to listen to the next book in the series!

An interesting twist on a vampire story. We meet a female vampire who is an independent photographer waxing on about Jim Morrison and Beethoven
She had a twin sister or does she still? She meets a man, a rock star in the making….who to believe, who to trust. How to live
Love these narrators with the seamless dialogue, expressions and timing. A movie in words
Enjoyable, entertaining and worth the time to experience a new take on immortals
I received a free audiobook for an honest and voluntary review

This is book 1 in Wilson's Immortal Confessions and while it can be read as a stand alone, the ending has me eager to know what's next! This is an incredible read / listen all on its own! Captivating from the very beginning and the storyline keeps you guessing with twists and turns throughout. I didn't know how the storyline could end with me being content but Wilson did a great job of bringing all the pieces together. Well written and absolute perfection with the dual narration - Yves smooth voice is perfect for our main character Ashara and her sister Zariaz. Grayson's voice and accent made me all swoony. I love the dark, rock n roll / twin / vampire romance of this story and while dark, still offers hope. Definitely a listen I would recommend!


I have read this book many times over the years. I was unsure how I would feel about the audiobook especially since it had two narrators. I had absolutely nothing to worry about. This audiobook was easily one of the best I've ever had the pleasure of reading. This is a fantastic read for any time of year but it makes for an especially fun beach read.

Great book! I loved the unique musician aspect of it. And the twist ending. I can't wait to get my hands on more from this author.

So I’m on on the fence. Had I not been out walking for miles. I am not sure I would have made it through the book. The beginning is very slow and more like a autobiographical novel meets contemporary romance. Granted it has amazing music references but I was just eh. Then the sister actually shows up. It’s much better from here! It’s twisted and she’s crazy but she brought spice to the story. I loved the twists it took and that ending had me on the edge of my seat because noooooo. Of course it ends in a cliffhanger and now I’m dying to know does she listen to the voice in her head?!?!? So like I said I’m on the fence. Half was a 2/3 the other half was. 4/4.5 read for me. The narrators did fantastic! My first time for them and I enjoyed them immensely.

Fantastic mix of rock and roll, monsters, and the occult. Loved all the music references. Vivid characters. A fun and very memorable listen. Solid performances by narrators.

The book is well written and well thought out. I love the music theme to it and how the chapters fit that theme!!!

The book to me is not slow and the story flows very well. It has some wonderful humor in it that made
me laugh out loud at some points!!!

The narrators do such a good job bringing this story
To life!! There are parts where it seemed very real with people talking over each other as they were in conversation.