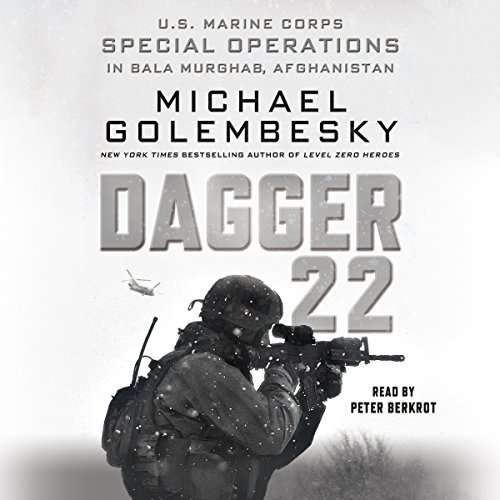 The unforgiving Afghan winter settled upon the 22 men of Marine Special Operations Team 8222, call sign Dagger 22, in the remote and hostile river valley of Bala Murghab, Afghanistan. The Taliban fighters in the region would have liked nothing more than to once again go dormant and rest until the new spring fighting season began. No chance of that - this winter would be different.

Along with Afghan and International Security Forces (NATO), the marines of Dagger 22 continued their fight throughout the harsh winter to shape the battlefield before the Afghan ground began to thaw. From one firefight to the next, the noose began to tighten around the village of Daneh Pasab and the Taliban command cell operating there. On April 6, 2010, a ground force consisting of US Army Special Forces, Afghan commandos, and Marine Corps special operations conducted a night assault to destroy the heavily entrenched Taliban force, breaking their grip on the valley and stopping the spring offensive before it even began.

But nothing in Bala Murghab comes easily, and combat operations wear on the operators of Dagger 22 as they lean on each other once again in order to complete their mission in one of the most brutal environments on earth.

The story was good, but I had a hard time getting past the reading style of the narrator.

Decent book over the top performance

Story was good. unfortunately the over the top performance and annunciations make it almost unbearable.

This probably would be a much better book if read rather than listened to. I will be certain to not listen to another book read by this guy, as his reading made this book a huge dud. Awful job of reading!

I've read about 10 books on Iraq and Afghanistan military action. This narrator was so contrived and forced I found it hard to listen to the story. The emotion sounded completely fake. For me, it detracted from the story.

Narrator was an over actor, mis pronounced military acronyms, story dragged on and on with no highs and tons of lows, takes major endurance to make it through... don't waste your money

Where does Dagger 22 rank among all the audiobooks you’ve listened to so far?

It ranks pretty high on my list, the story is great and reminds me of my time in Iraq and Afghanistan.

The narrator is one of the worst ones I have heard. His voice is super annoying and almost made me stop listening. He tried too hard to add gruff to his voice.

Narrator should not be allowed to narrate

What was most disappointing about Michael Golembesky’s story?

The over exaggerations of the narrator and his ridiculous intonations.

His intonations and the way he dramatized everything.

Damn. I loved this book. So Moto.

I've had a run of bad luck with narrators lately ... No one I know speaks like Peter Berkrot ... he really makes a great story hard to get through .

Finshed what he started.<br />

Yet anther account of Men fighting for each other and standing against evil. The story gives a no bullshit point of view to modern warfare where every General can watch Men on the ground and arm chair Quarterback without reguard to the people they control.