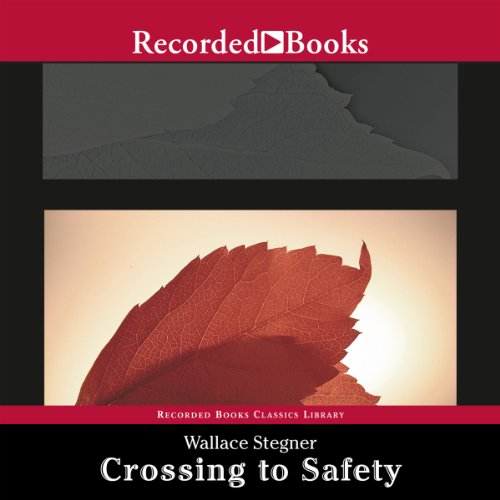 One of the finest American authors of the 20th century, Wallace Stegner compiled an impressive collection of accolades during his lifetime, including a Pulitzer Prize for Fiction, a National Book Award, and three O. Henry Awards. His final novel, Crossing to Safety is the quiet yet stirring tale of two couples that meet during the Great Depression and form a lifelong bond.
©2002 Wallace Earle Stegner (P)2009 Recorded Books, LLC

"This is a wonderfully rich, warm, and affecting book." ( Library Journal)
"It's deceptively simple: two bright young couples meet during the Depression and form an instant and lifelong friendship. "How do you make a book that anyone will read out of lives as quiet as these?" Larry Morgan, a successful novelist and the narrator of the story, poses that question many years after he and his wife, Sally, have befriended the vibrant, wealthy, and often troubled Sid and Charity Lang. "Where is the high life, the conspicuous waste, the violence, the kinky sex, the death wish?" It's not here. What is here is just as fascinating, just as compelling, as touching, and as tragic." (Amazon.com review)

I adore Stegner. He develops characters and stories with depth better than anybody. This book is about two couples, Larry and Sally Morgan and Sid and Charity Lang. They meet as young couples in a college in Wisconsin, and the book follows their lives and relationships.

It is by twists and turns heart-warming and tragic. He shows the two sides of character that can be giving and demanding - so much like life. In this book, he digs into how life is complex, we get in our own way, but some people gloriously overcome illnesses or setbacks what would destroy others.

This was his last book, and makes me want to read much more that he has written.

There is a certain nakedness to Stegner's storytelling, in the sense that it doesn't shy away from uncomfortable subjects like death and troubled marriages. His characters are not always likeable, but they are very real and may even remind you of people you know. This is a book about the life of a friendship between two couples over many years. Stegner explores the joy and excitement of the young friendship, but he recognizes that friendships can die away to almost nothing for long periods of time, only to be reignited by a major event. Stegner's appeal (for me anyway) is in his ability to develop his characters as they age and deal with life's challenges -- as well as to describe their surroundings lovingly and vividly. This story is not predictable, nor does it offer any particular shocks or surprises. However, it is gut-wrenching in its honesty about human beings and the institutions of marriage and friendship.

The most beautifully written book I've ever read

Definitely. I am not a literary savant and didn't even recognize many of the references in this book, but I loved this book in every way. The reading was done wonderfully, the book, itself is the most beautifully written book I've ever read. I do not usually love flowery language in books and often loose focus, but the way that this author gives every detail of emotion and experience was spell-binding. I am almost, but not quite to the end so can't comment on it, but cannot imagine that I will be disappointed because I love this book so much.

What other book might you compare Crossing to Safety to and why?

Can't think of any

Have you listened to any of Richard Poe’s other performances before? How does this one compare?

A Tour de Force from a Master

What did you love best about Crossing to Safety?

It's a beautifully written novel, psychological and reflective, that follows a friendship between two couples over forty years. Richard Poe's reading is as close to perfect as it can be.

If I didn't have to read this for a book club I would have shut it off 5 hours ago. Literally nothing has happened. There's no conflict, no tension, no story. There is nothing to move the lack of story along. The characters are just so bland. I don't even think it's "beautifully written". It's just so dull and plodding. The people who have given this high reviews have drunk the Kool Aide. Don't waste you're credits or time. It's awful.

Lush and beautifully written, this story covers many years of two couples. If you like Richard Fords stuff, or Russo, then you will be very happy with this book.

Slow but worth the time

Hmmm, how does one review a book like this? It’s the story of two couples: their friendship, marriages, lives, treasured memories and hardships. I found the story a bit slow at times and occasionally disjointed. No huge rising plot. No language frills. No magnificently crafted scenery. That said, there was a rawness to it—a deeply human face that held my attention and my focus, even when I wasn’t reading. I’m glad I read it, but I’m not sure I’d go around recommending it to everyone I know… except perhaps to my sister, to get her take on the family dynamics in the book. There were certainly some ponderous subtleties I could relate to.

Would you listen to Crossing to Safety again? Why?

I don't think I would listen to it again, although it was beautifully written and narrated. I particularly disliked Charity,and she was really the dominant character in the book, as she was in the relationship between the two couples.

For myself I would have changed the ending (although I don't want to have any spoilers here). I thought there was surprisinging cruelty shown to one of the main characters, although it actually seemd to be the culmination of the way he had been treated by his wife throughout their marriage. I wonder if others have this same reaction.

Which character – as performed by Richard Poe – was your favorite?

No particular moment - just the enduring depth of the friendship between the two couples, the way they nurtured each other over the years and became each family to one another. Perhaps their reunion after several years of not seeing each other at the end was the most moving. (again, I don't want to give anything away about the ending)

I learned about this novel from the " The End of Your Life Book Club" book. When I checked it out, the reviews on it were amazing. Unfortunately I do not agree with the previous reviews. It is a very well written book but I think the story is average. There were times when I just wanted the chapter to end, the details of a certain situation would linger forever. I think the book could have been much shorter and still get the same message out.
Having said that, still, I think there were some concepts, towards the end of the book, that were worth discussing

What aspect of Richard Poe’s performance would you have changed?

Too monotone for me

Unusual characters that feel like old friends.. Adds much to thought & discussion of end-of-life issues in a very personal and creative way.