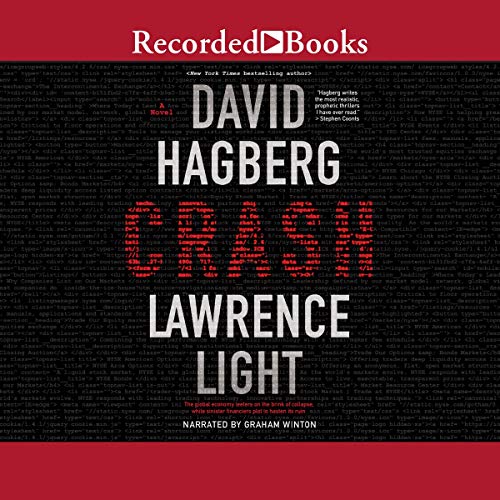 The second Great Depression is coming. The world’s economies are groaning under too much debt. If one thing goes wrong, the entire rickety system collapses. Now, acclaimed award-winning New York Times best-selling novelist David Hagberg and renowned financial reporter Lawrence Light have combined forces to dramatize - hour by hour - how this all-too-real catastrophe could go down in Crash.

With debt-burdened governments and businesses worldwide about to go bust, a cabal of Wall Street big shots plot to destroy the globe’s stock exchanges. To provide that one thing that goes wrong. In 24 hours, a powerful computer worm will smash the exchanges and spark an international panic, pushing a debt-laden world into the abyss. The Wall Street gang’s investment bank will be the last one standing, able to make a killing amid the ruins.

But one person, who works for their bank as a computer expert, spots the worm embedded deep in its network. Cassy Levin invents a program to destroy the cyber-intruder. Angered by Cassy’s discovery, her bosses order her kidnapping.

Her boyfriend, a former Navy SEAL, is alarmed at Cassy’s disappearance and unravels the plot. Ben Whalen only has until the next morning to save the woman he loves and prevent the economic apocalypse.

This story is based on the genuine threat posed by towering debt, which will make the 2008 financial crisis look puny.

Could be today’s headline...

As a long time fan of David Hagberg I preordered this book. This book is about a computer program which is basically a Global Debt bomb created to cause havoc and ruin in the stock market and specifically targeting the US and China relations. The person implementing will of course come out a savior with fixes for the economic ruins. What no one will realize is that with his implementation he has created a financial coup for himself.
The scary part is the afterwards when coauthor Lawrence Light talks about a real Debt Bomb and how it’s only a short matter of time before we arrive. The men had foresight because I think we’ve there.
Graham Winton does a great job narrating.
This book is a must listen. HIGHLY RECOMMENDED.
If you found this review helpful please indicate so.
Thank You.

Kept Me Going To The End

You might call Crash a motivational book. As a long time financial advisor, I was curious what these distinguished and knowledgeable authors would write about just when the stock market had begun a steep drive in late February 2020. I purchased and listened to the Audible version.

I was hooked. Each morning I was determined to continue listening as I made my 5-mile walk around the neighborhood. The characters were as despicable as I imagined they are on the real Wall Street. Several mornings as I woke up and thought about not exercising but then realized I wanted to continue listening to the story, I was hooked and wanted to see how things were progressing and would the hero and heroine survive to the end.

Be advised this book moves fast. It only covers a few days of terror and mirrors how things can happen just like this in real life. The plot seems easy to translate into a real series of events in today’s interconnected financial world. I hope no one follows their outline to a cyber formulated disaster fed by greed and megalomania.

The afterword by author Light is real and scary. It was written before our current Covid-19 pandemic and the huge increase in federal spending to offset a pending economic free fall. It is a real warning, in my opinion. This book will leave you convinced these things could happen and this reader hoping they never do.