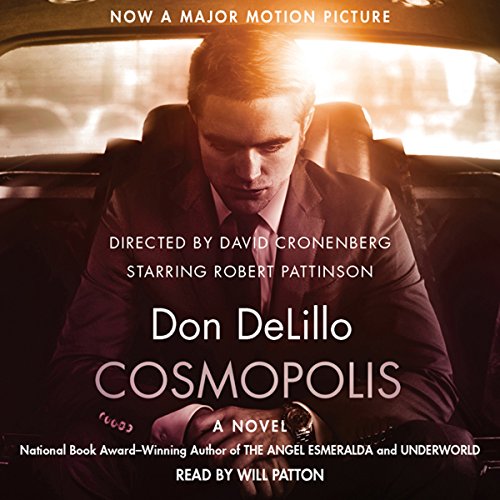 It is an April day in the year 2000 and an era is about to end, those booming times of market optimism when the culture boiled with money and corporations seemed more vital and influential than governments.

Eric Packer, a billionaire asset manager at age 28, emerges from his penthouse triplex and settles into his lavishly customized white stretch limousine. On this day he is a man with two missions: to pursue a cataclysmic bet against the yen and to get a haircut across town.

His journey to the barbershop is a contemporary odyssey, funny and fast-moving. Stalled in traffic by a presidential motorcade, a music idol's funeral, and a violent political demonstration, Eric receives a string of visitors - his experts on security, technology, currency, finance, and theory. Sometimes he leaves the car for sexual encounters and sometimes he doesn't have to.

Cosmopolis, Don DeLillo's 13th novel, is both intimate and global, a vivid and moving account of a spectacular downfall.

"DeLillo, master novelist and seer, tells the surreal, electrifying story of this dehumanized moneyman in English scrubbed so clean and assembled so exquisitely it seems like a new language....Breathtakingly poetic and devastatingly witty." ( Booklist)
“ Cosmopolis is nothing if not challenging, thought-provoking, and utterly different.” ( Chicago Sun-Times)
“ Cosmopolis is written with the sort of intensity you simply don't get elsewhere.” ( GQ,UK)

I agree with the previous reviewer that this book is read perfectly. And the book itself, while concise, is brilliant in its erudition, the poetry of the voice and the sustained mood.

DD loves language. Sometimes his books amaze with the shear volume of beautiful language. This novel is one-breath poem in prose. Inspired.

"My prostate is asymmetrical"

A day in the life of Eric Packer, 28-year-old "hyper-maniacal" self-made billionaire genius asset manager and founder of Packer Capital, may not sound so promising as the subject of a novel, but "Maybe today is the day when everything happens." Eric's day begins after another night of insomnia. "What did he do when this happened? He did not take long walks into the scrolling dawn. There was no friend he loved enough to harrow with a call. What was there to say? It was a matter of silences, not words." He walks through the 48 rooms of his triplex apartment, "past the lap pool, the card parlor, the gymnasium, past the shark tank and screening room," before tracking currencies and examining research reports and descending in the one of his two private elevators that plays music by Satie. Leaving the 89-story residential tower, Eric enters his anonymous white limousine, telling his chief of security, Torval, "I want a haircut," though the destination lies across NY City through a vast traffic jam caused by a visit from the President of the United States. As Eric's limo crawls across town in stops and starts, he is serially joined for meetings in the car by his top aides (chief of technology, currency analyst, etc.), and at one point a doctor's associate even enters the car to give him his daily health check up and rectal prostate exam. Occasionally Eric leaves the stopped limo, to visit his mistress art dealer or to eat a meal with his wife of 22 days, Elise Shifrin, banking fortune heiress and poetess, who realizes for the first time that he has blue eyes and refuses to have sex with him because the energy involved in poetic creation is "precious."

Aside from sleep increasingly failing Eric, strange things seem to be happening today. His chief of technology assures him that "our system's secure. . . we're impermeable." Why then does Eric catch a glimpse of himself in the limo spycam running his thumb along his chinline one or two seconds before he runs his thumb along his chinline? All factors must lead the yen, which he has been borrowing in massive amounts, to drop in value. Why then does it continue to rise? Eric has read a line in a poem about a city under siege that goes, "a rat became the unit of currency." Why then do grey spandex-clad anarchist performance artists start popping up waving dead rats around in the air? He believes that "Data itself was soulful and glowing, a dynamic aspect of the life process," and that "the master thrust of cyber capital" would be "to extend the human experience to infinity, a medium for corporate growth and investment." Why then does he feel so much in his body and want to live in "meat space"? And a "credible threat" against his life has manifested itself. Why then does he feel so unconcerned and alive?

Don DeLillo's Cosmopolis (2003) explores the mind of a cyber capital potentate and by extension our contemporary world, dominated as it is by "the investment banker, the land developer, the venture capitalist, the software entrepreneur, the global overlord of satellite and cable, the discount broker, the beaked media chief." But it also speculates on the human condition in general, on love, memory, identity, pain, doubt, randomness, fate, and knowledge, all influenced by metropolitan life.

DeLillo packs into this April 2000 day in the life of Eric Packer philosophical ideas (e.g., "But how can you make words out of sounds? These are two separate systems that we miserably try to link," like "Mirrors and images. Or sex and love"); speculations on "obsolete" words (e.g., skyscraper, office, and ATM); quirky characters (e.g., the stalker Benno Levin); funny and pointed conversations (e.g., "That's not why I'm unemployable." "Then why?" "Because I stink. Smell me." "Smell me."); and bizarre and vivid set pieces (e.g., a movie scene shot in the middle of the night featuring a horde of nude people lying as if stunned or dead in an intersection). DeLilo also writes many neat descriptions, like this one contrasting people and advertisements ("Stunted humans in the shadow of the underwear gods that adorned the soaring billboards. These were figures beyond gender and procreation"). And many pithy lines:

"Poems made him conscious of his breathing."
"Money is talking to itself now."
"The logical extension of business is murder."
"What did he want that was not posthumous?"

Will Patton gives a great reading of the novel, craggy and tender, a high point being the intense stream of consciousness fugue before the climax wherein Eric ponders a closed door in a derelict building.

Not all of Cosmopolis works for me. For instance, there's a long scene of a grandiose funeral for a sufi-rap star that feels forced and unsuitable for Eric's character. But readers interested in the contemporary human condition, in cities, or in dense, rich, short novels should like this one.

This isn't the most popular of his books, but the reading makes this book is masterful. I've listened to this particular book a dozens of time, simply because of the reading. I enjoy DD greatly and have downloaded several of them, but this is the best read bar none. In fact, I enjoyed this rendition so much that I've actually checked the other books recorded by this reader (but unfortunately, the other titles are in genres that I am unfamiliar with). For those who enjoy DD, this is an excellent audio version.

What did you love best about Cosmopolis?

What other book might you compare Cosmopolis to and why?

Brings back the flavor of Great Jones St.

made me chuckle with a twist

I'm a fan of DD and this is a great book, but the Will Paton (reader) makes this special experience. The only time I'd heard reading like this was when my friends would read out loud a passage they've loved since highschool.

I had to read this as an assignment

It was a horrible TMI Story that was raunchy and violent story.I don’t even know what the storyline was about

Not the best Dellillo.. WIl Patton does well

Would you listen to Cosmopolis again? Why?

Maybe I would to pick up missed detail...

What was one of the most memorable moments of Cosmopolis?

The destruction of the limo marking the slow decline.

Would you consider the audio edition of Cosmopolis to be better than the print version?

What was one of the most memorable moments of Cosmopolis?

The point where the character realizes that all of the precautions of the super rich which insulate him from the reality that he has left behind actually threaten him more than any potential danger that they might protect him from.

Who was the most memorable character of Cosmopolis and why?

The driver with the scar on his eye

This was the first book I had heard narrated by Will Patton and loved his voices so much that I have sought out some of his other work. Though not a detective story reader, I have come to be an avid listener of the James Lee Burke novels that Will Patton does. Anyone who has enjoyed him doing Cosmopolis might want to give those a spin. His voices are just as masterful as in Cos. I love Don DeLillo to read because I like to visually see his words on a page; he has such a beautiful way with language. But I have played Cos over a dozen times because Will Patton makes it a unique experience on its own.

You can almost see the author flipping through his dictionary and still producing garbage.