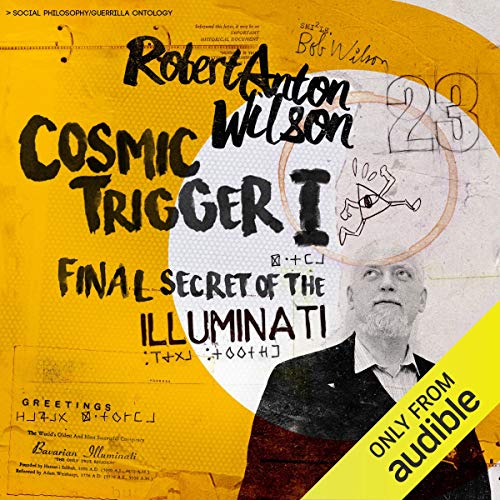 The great modern classic of a brilliant rebel's personal exploration into the nature of consciousness.

"Cosmic Trigger deals with a process of deliberately induced brain change. This process is called 'initiation' or 'vision quest' in many traditional societies and can loosely be considered some dangerous variety of self-psychotherapy in modern terminology. I do not recommend it for everybody...briefly, the main thing I learned in my experiments is that 'reality' is always plural and mutable." (Robert Anton Wilson, from the preface)

"Wilson managed to reverse every mental polarity in me, as if I had been pulled through infinity. I was astonished and delighted." (Philip K. Dick)
"Robert Anton Wilson is one of the leading thinkers of the modern age." (Barbara Marx Hubbard, Committee for the Future)
"Erudite, witty, and genuinely scary." ( Publishers Weekly)

This is essential material for anyone unafraid to colour outside the lines, even for a minute. This enthused listener repeats each chapter twice in succession to ensure no detail is missed. Dence to the brim with mind bending goodness. The less sceptical listener has been noticing non trivial synchronicity in his suroundings since embarking down the yellow brick red pill hole. The blissed out listener feels grateful to have found this gem again and wishes to stand on the shoulders of said bliss to tune in to whatever one can. Thanks to the RAW foundation for keeping it real{17^} Tu^^11. 932365

I tried to keep an open mind about the narrator, I really did. All I wanted to do was focus on the substance of the book. Unfortunately, I couldn't. If I said the narrator didn't ruin this book for me I'd be lying.

The narrator’s accent takes a few minutes to get used to. Other than that RAW is Bob at his best. A reminder of the power of a network of love, this page turner zooms along. Sirius-ly great!

If you are at all interested in subjects like psychology, conspiracy theory, the occult, hypnotism, yoga, science, religion Etc, then this is the book for you. Excellently written by Robert Anton Wilson the book will leave you fully engaged for the entire time that you are listening to it.

SO much fun to listen to!!!

Would you consider the audio edition of Cosmic Trigger I to be better than the print version?

I'm a huge RAW fan, and love this book SO much that it would be tough for me to NOT like the audio book. I reread it every few years, and listening to it is a whole new experience!

It takes you right into "Chapel Perilous" and transforms your world view starting from page 1.

Have you listened to any of Oliver Senton’s other performances before? How does this one compare?

He does a delightfully bad NY/Philly/Boston/Grouch Marx accent, with British pronunciations. It's a little distracting, but he has so much enthusiasm for the material it is only a minor setback. In the end, probably more fun than a straight read.

yes! but it's worth savoring and relistening to...

Many insightful details explaing the science and philosophy behind the Illuminatus Trilogy. You need to read the Trilogy first to truly appreciate this back story to its fullest.

A nexus of weird

I suspect RAWs writing will infuriate some readers as he hops between being a skeptic, a heirophant, a seeker and a finder, a trickster and a supplicant for enlightenment. A mad collection of counter-culture icons appear and disappear, beliefs are sampled from an AYCE buffet. Is it nourishment? Dunno, but RAW was certainly full of it whatever it was.

Robert Anton Wilson was and is a highly significant contributer and communicator of a wide array of occult wisdom. This book is a brilliant jumping on point for those just beginning their journey and those seeking perspective on their journey.

Awesome book. I loved everything about it. The message. The knowledge. The narrator. Information.Thank you.

Love listening to the thoughts or RAW

Narrator took some getting used to. And I don't share the same views on Crowley and whatnot, but I adore the writing and inner thoughts of RAW. Enjoyed it.

This book is one of the most enjoyable reads I've experienced. I pored over this. He taught me so much about Leary and about Crowley that I was unaware of. Oh and the way he ties it all together at the end leaves one weeping and celebratory all at once. A nice blend of cerebral, reverent, skeptical and amusing leaving one with more questions than answers. Highly recommend. And the narration is great, albeit I can understand that others would have a hard time.