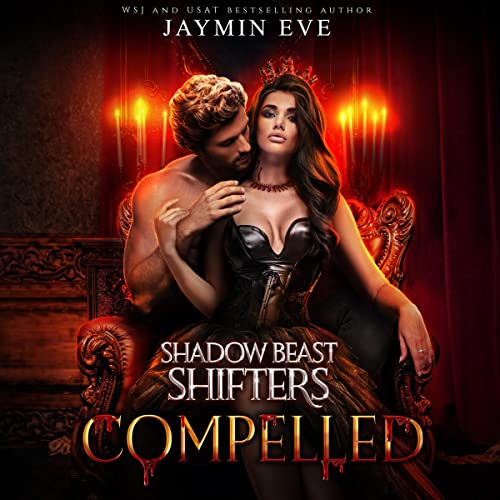 A standalone story in the Shadow Beast Shifters world. Best listened to after Deserted for storyline continuity.

Simone, of the Torma shifters, thought she was finished with the world of supernaturals that existed outside of Earth. She’d been there, done that, and had the near death experience to show for her time.

Then a summons back to Valdor–the vampire world–is dropped in her lap.Turns out that the last time she was there, her teeny tiny mistake sent out an energy burst that called to an ancient powerful master. A master who is looking for a mate and wants Simone to participate in the Selection to prove her worth. Attendance non-negotiable.

Lucky for her, she still has one ally up her sleeve: Lucien.

Okay, yeah, he’s a snarly, powerful, frustratingly perfect master himself, but at least she knows where she stands. Lucien agrees to enter himself as a master-looking-for-a-mate in the Selection so they can pretend to fall for each other.

Only, it’s never been that simple with Simone and Lucien, and all too soon the lines between pretend and real get very blurry. Especially when there’s feeding involved.

Simone now has more at stake than just her life...her heart is on the line.

This is a standalone in the Shadow Beast world, and does not end on a cliffhanger. It is full length at 110k words, and it is advised to listen to the first four in the Shadow Beast world first (Rejected, Reclaimed, Reborn, Deserted) to get the most enjoyment from the story. Not required though. This is an enemies to lovers story, with action, snark, anti-heroes, and steam. It is recommended for 18+ due to storyline and situations.

I wanted to love it

The female voices spoke so fast i had to go to .9 speed. I wish the story had more substance. There was potential but it just didn’t peak.

Well Jaymin Eve has done it again, this book is completely epic! It is the perfect combination of paranormal romance, hot alpha & a sassy female who can hold her own. And don't worry, there is even a furry sidekick that is found.

The narrators doe an absolutely amazing job with this audiobook. I love the duet narration (male narrator reads all male spoken parts).

I have always loved books by this author & this one is no exception. This whole series has been so good & I love that this book is a standalone, so no horrible cliffy to hang off of at the end. Simone & Lucien have events they have been through together during earlier Shadow Beast books that nobody knows the details of. We FINALLY find out what happened during the original trilogy & it was not what I had expected, at least not completely.

These two are seriously smoking together & I loved every minute of their journey. I cannot wait to see what else we get from the Shadow Beast world.

But!!! The damn male narrator... uhg! After having males with such sensual panty-dropping accents it was disappointing for Shadow to no longer have a sexy Irish brogue and Lucian didn't even sound sexy! but wow the story was good!

Another audiobook, another review! I think it was pretty good, the narrators and voices for Simone and Lucien were great. There were some words where the enunciation could have been clearer but I'm super nitpicky about that kind of thing so for other people it's probably fine! 🤣 My other thing is that when it came to dialogue involving multiple male members of the inner circle I struggled to know who was talking if it wasn't Lucien or Shadow because the voices for the others sounded very similar to each other. But overall I still enjoyed the performance as their voices worked very well together and I would listen to both narrators again!

Simone and Lucien, you two have had some explaining to do since we reconvened with y'all back in book 3! I needed to know not only what happened when you were in Valdor but also what went down between you two specifically because all of your wonderful banter and sexual tension had vanished! Thankfully over the course of this story we had a strong return of both and over the book these two continued to grow on me and now Crimson Bee holds a special place in my heart! 🐝❤️

I really enjoyed the selection/bachelorettte theme that this book focused around and I think I'm developing a love for the fake dating trope because I could not get enough of the angst that came with it here! I will say that one trope in particular has started to feel a bit repetitive when it comes to this series as it has shown up in every book so far although it is done in a different way each time. I understand that it had to happen here for the sake of having a true HEA, I just hope that we get something a little different in Glamoured.

But while the stories might be similar I am invested and endeared to every character of the inner circle and I am really hoping we get a story in future about the two new side characters that we were introduced to! 👀 It's already been confirmed that Glamoured will be Len and Sam's story but I'm curious to see if Jaymin will end it here or if she'll give us Galleli's story considering his tragic past in the romance category. I'm really looking forward to book 5 because Len is definitely one of if not my favorite character from the inner circle and I just want him to have his happy ending already! Hopefully we won't have to wait too much longer! 🤞🏻

Great book although there’s more sec scenes then the other which kinda gets old. But other then that great and can’t wait for the next one

I understand that Simone's voice wouldn't sound exactly like the woman who first read her.. kind of glad about it, but she is TERRIBLE!!! I don't want to finish and I'm only in chapter one...I have to slow things down, whybis she talking do damn fast, and already we're talking about Mera again! For fucks sake!!
Why the hell does Lucian sound like a monotoned, moron! OMG!! Every male voice sounds the same, it's terrible!! He's worse than she is!

They also did it again, made half ofbthis book about Mera having that damn baby, and Angel having hers!! We are literally halfway through the book and still haven't gotten to Simone's and Luciens drama.

That damn inner monologuing and those lame ass sexual innuendos were cringe-worthy! She made STUPID DECISIONS and got herself into massive trouble and was too stubborn and stupid to follow instructions that would help her.

That is how this author made all of her female leads...They were supposed to be smart and sassy and they came off as rude assholes.

She also does this in all 5 books, I want him, but I know he's not for me, I know this won't last, I know I will have to give him up soon. It's so annoying!

The ending was hurried and felt like she was trying make sure she tied up all the loose ends. She didn't spend nearly enough time on Simone and Lucian..I didn't like this book 😕

Fantasticly written. The story takes you on a supernatural adventure that allows hrs of escapism.

great story. love all of them! I'm wondering if we have one more book.coming about out fea friend len?