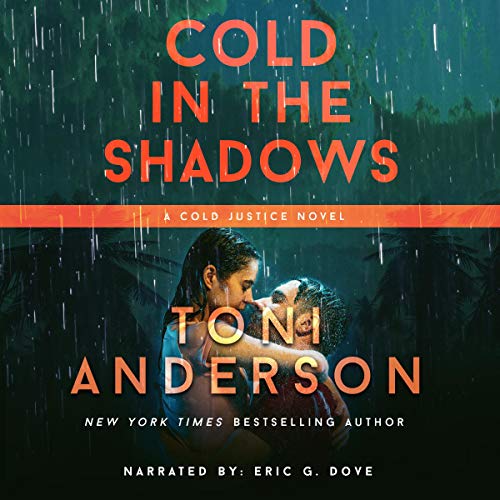 Cold in the Shadows

CIA Agent Patrick Killion is on a secret mission to hunt down the ruthless female assassin hired to kill the vice president of the United States. The trail leads him to the Colombian rainforest, and an earnest biologist, Audrey Lockhart, whose work on poison dart frogs gives her access to one of the deadliest substances on Earth - the same substance used to murder the VP.

When Audrey is attacked by the local drug cartel, Killion steps in and hustles her out of harm's way, determined to find out what she knows. His interrogation skills falter somewhere between saving her life and nursing her back to health as he realizes she's innocent, and he ends up falling for her. Audrey has a hard time overlooking the fact that Killion kidnapped her, but if she wants to get her life back and track down the bad guys, she has to trust him. Then someone changes the rules of their cat and mouse game, and now they're the ones being hunted - by a cold-blooded killer who is much closer than they think.

Another thrilling ride that is suspenseful, exciting and new from a very talented author. I haven’t read/listen to one of Ms. Andersons books that I haven’t loved. She gives you the thrills and excitement of a fast pace action packed story that has an outstanding plot with wonderful characters. The vice president is killed with every fact pointing to biologist, Audrey Lockhart who is minding her own business and gets attacked in her lab. The man tells her to back off and scares the her. She doesn’t run and hide she runs to the police who are in with the cartel. The next attack against her isn’t so friendly and things get real interesting and very dangerous. Ms. Anderson has a way of pulling you in from the first page which always starts with excitement and suspense. This is one story you do not want to miss.


I just love Eric G. Dove as a narrator he pulls you in with a very strong and powerful voice. There are no background noises or any breaks in his audios just a clean clear and power listen. His tones are outstanding you can feel the passion, excitement coming right out of your speakers. His male voices are a wonderful as his female. You are never left guessing who is speaking or what they are feeling. His Performance is one of the best narrators I have listened to. I know when I see his name it is going to be a wild exciting ride.

Audrey is a very strong character who is scared but doesn’t let that stand in her way. She is shocked to find out people are after her. She doesn’t know why everyone is after her or why anyone would want her dead she is just a biologist studying frogs trying to keep them alive. After being attacked she is on the run for her life with a mad man who she isn’t sure is there to protect her or kill her. I really liked this character she is strong and stands up for herself. She is hurt that maybe the people she cares about are after her. Who would set her up like this she hasn’t a clue but is going to find out. She is one bullheaded lady who is about to take down the people who are trying to take her down…that is with a little help….

If was so nice to see Patrick get his own story he is a sweet heart who has given up his life to serve and protect the USA. He does the jobs no one talks about some are not even legal but that doesn’t stop him when the bad people get in the way he takes them out. He stops crimes no one knows about and even some they do. He always gets his man or woman never looking back just take life and danger as it comes. For once he has to stop and put the pieces together that just do not fit. Audrey sure doesn’t act like an assassin until he knows for sure he isn’t letting her out of his site.


The author gives a compelling and powerful read full of action, thrills and tons of excitement. She gives you exciting passion that will burn up your pages. She twists a tale like you have never seen leaving you guessing which way she will go. She had me fooled for a little while things just didn’t add up. You will be so surprised to find out who is behind the crime and why they wanted Audrey to take the fall. Her life is about to change as she knows it. If you haven’t read any of Toni’s books you do not know what you are missing. Toni has been one of my go to author from her very first book she pulled me in scaring the crap out of me. Her plots are to live for she always gives you a page turner that you do not want to put down. If you are looking for an action packed thrilling read full of suspense that will keep you on the edge of your seat you have found it. I highly recommend this story or any that Toni as written. You are in for a wild ride.

Excitement, danger, murder, desire, all the way through this book. I think it might be my favorite one so far. AND, OMG, not a story filled with page after page with angst, I just love that about Ms. Anderson’s books. Killion was attracted to Audrey but he just knew she was a hired killer so he held back, only to figure out she was set-up, and that made him even more protective of her, and desire her all the more. And still he held back, until SHE had had enough.

We didn’t find out for a while why Tracey, our killer, hated Killion so much and that made the story more exciting. Plus the fact that the bad guy she reported to was always nameless. And since he’d had something to do with Rebecca’s death and Audrey’s attempted murder 5 years before I couldn’t see good things happening to Tracey when he was done with her. BTW, none of this is spoilers.

There was some nice sexual tension in this book and some great sex.

Also, the F-BOMB was used 85 times so DEFINITELY don’t buy this book if that word bothers you.

As to the narration: Eric Dove gets better and better. Love his male voices and the females sound just like females. Wonderful job throughout the book.

Would you consider the audio edition of Cold in the Shadows to be better than the print version?

Yes audio edition is better for me because I can listen anywhere...car, work, etc.

The plot is complex, very interesting without being overwhelming or bogged down with fillers plus there are no loose ends…This is exactly how I like my serial stories because each different set of characters have their own story to tell instead of piggy-backing (unfinished business) of the previous one.

Several but one of my most favorite scenes is when Patrick comes to Audrey parents house, riding a red Harley.

I chuckled a few times at the antics of the Patrick & Audrey but mostly had my thinking cap on trying to help them solve the case.

Toni Anderson is one of the BEST romantic suspense authors ever! Patrick is like a secret CIA hitman, he gets the job done and moves on. Audrey is a smart chick that fights back when she blindly gets tangled up in a web of drugs and greed but whose the real enemy?

The narrator also did an awesome job.

Wow! Wow! Wow! This book was offered as an ARC and WOW am I glad I gave it a whirl. Toni Anderson knows how to grab you and keep you on the edge of your seat. This is something like book 5 in her series, but is a standalone that only makes you want to read more. There are references to previous books but only as other missions Killion was been on.

Killion doesn't know if he needs to protect Audry or if she's the bad guy. And, watching him strip away the layers of this mystery to find out keeps you locked in the story. This is romantic suspense at its best. Non-stop action, sprinkled with just enough sexual tension and romance, and a tough heroine that isn't just another damsel in distress. Someone's trying to kill her and Killion, the only reason she's still alive, suspects she might be a terrorist. She's fighting for her life on all fronts.

Eric Dove does a great job with narration. His pacing, accents, characterization, and just the way he delivers the story so pulls you in and holds on. This is one of those stories you'll want to listen to straight through.

I KNEW Killion's story wouldn't disappoint. I was hooked from the first chapter. Audrey was strong and smart and didn't do stupid shit. She defered to the experts to save her life and to keep her alive. I loved Logan and Noah, I hope Toni Anderson has a spin off planned for those guys.

The story was engaging and never dull. Patrick Killion was every bit as kickass as I thought him to be. I didn't get the sexy vibe from him in the other stories but wow was that rectified in this book. Danger, suspense, sex, oh my!!!

Now seriously I NEED to go back and listen to Alex's story, the little tidbits from books 2-5 lead me to believe that his story is EXPLOSIVE.

This was a great book for this awesome series.

I loved this book. Toni Anderson was a new author to me, but I like romantic suspnse. Right away I was pulled into her world and was slow to let go when I had to say...sleep. The chemistry between Agent Killion and Dr. Lockhart was combustible and I was waiting with baited breath to see if there was a chance of them getting together with so many things against them. The main one being that he originally came into her life to investigate her for murder.
Eric Dove's voice was perfect and his timing was spot-on for this suspense-filled book that had so many twists and turns I would peek at the time I had left to listen just to gauge what had a possibility of happening next. This is one of those books that make you say, "I needed that." when it's over.
I am now hooked on Toni Anderson as an author and Eric Dove as a narrator. This book made me an instant fan.

I love everything this author writes!! Another great read and I highly recommend starting this series!!

Great Series, Fantastic Narrator, and since I'm from Louisville brought back memories of home and places I've known all my life. WOW😊

One of my favorites so far!!

Great action, nice plot.
The character development is nice as well. I wondered if the author would write about this character and was excited to see that she had! Enjoy

This is an awesome series! From the first book I was hooked. Just when I think this one is my favorite, it changes with the next book. I really like not quite knowing who the bad guy is till later in the book! Ive read other books from this author. She’s a winner!!