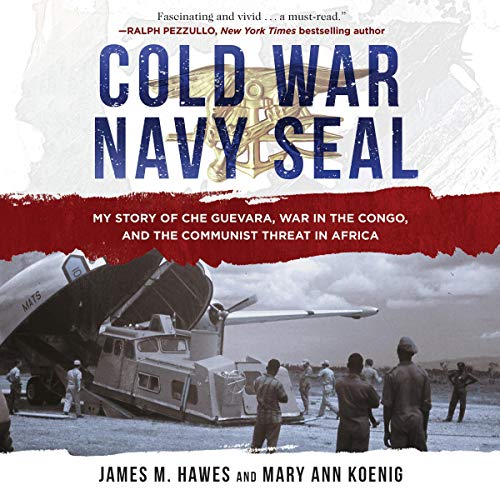 For the first time, a Navy SEAL tells the story of the US's clandestine operations in North Vietnam and the Congo during the Cold War.

Sometime in 1965, James Hawes landed in the Congo with cash stuffed in his socks, morphine in his bag, and a basic understanding of his mission: recruit a mercenary navy and suppress the Soviet- and Chinese-backed rebels engaged in guerilla movements against a pro-Western government. He knew the United States must preserve deniability, so he would be abandoned in any life-threatening situation; he did not know that Che Guevara was attempting to export his revolution a few miles away.

Cold War Navy SEAL gives unprecedented insight into a clandestine chapter in US history through the experiences of Hawes, a distinguished Navy frogman and later a CIA contractor. His journey began as an officer in the newly-formed SEAL Team 2, where Hawes commanded boats in the CIA's series of covert, hit-and-run raids into North Vietnam. Those raids directly instigated the Gulf of Tonkin Incident.

The CIA tapped Hawes to deploy to the Congo, where he would be tasked with creating and leading a paramilitary navy on Lake Tanganyika to disrupt guerilla action in the country. According to the US government, he did not, and could not, exist; he was on his own, 1400 miles from his closest allies, with only periodic letters via air-drop as communication. Hawes recalls recruiting and managing some of the most dangerous mercenaries in Africa, battling rebels with a crew of anti-Castro Cuban exiles, and learning what the rest of the intelligence world was dying to know: the location of Che Guevara.

In vivid detail that rivals any action movie, Hawes describes how he forced Guevara from the country, accomplished a seemingly impossible mission, and returned to a successful civilian life. Complete with never-before-seen photographs and interviews with fellow operatives in the Congo, Cold War Navy SEAL is an unblinking look at a portion of Cold War history never been told.

Nothing really happens very fast. I gave up. Just to slow for my taste. So t

I can’t explain how much I loved this book. This book quite daringly cross references recently declassified documents with a certain rebel leader’s own diary/log and makes the Navy & CIA operations in the Congo really come to life. This was an incredible look at a tough-as-nails Navy Seal team and equally tough partners. Such an amazing story that I restarted the book as soon as the Epilogue ended. Thank You Mr. Hawes, Ms. Koening and Mr. Campbell. This is an A+ audiobook in every possible way.

i have had the honor of meeting some of these men. The author does a great job narrating this secret mission which saved hundreds if not thousands.
A real tribute to the Makasi Cuban warriors in the Congo.