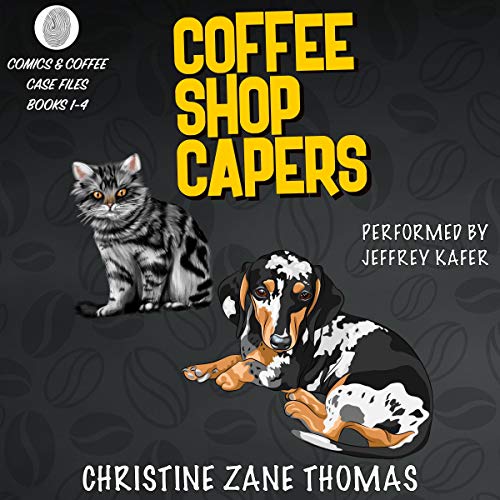 Castle meets Murder, She Wrote with a touch of Psych.

Four cozy whodunits to bring out your inner sleuth.

After several years in the military, Kirby Jackson just moved back to his coastal hometown to open up his dream coffee shop. But his best friend and co-owner, Ryan, just had to add his own flair: Comic books.

And the business isn't off to a good start. The coffee is fine. With the comics floundering and sinking Kapow Koffee into debt, Kirby has to make a tough decision.

On the cusp of telling Ryan the grim news, he finds his friend with a knife in his back.

Of course Kirby becomes suspect number one. Perhaps things wouldn't look so bad had he not been planning to metaphorically stab Ryan in the back, cutting him out of the business.

The shop’s mascot, a stubborn dachshund named Gambit, might hold the keys to solving the case. But he ain't talking. His woofs are only for treats...Or are they?

Can Kirby prove his innocence? Can he and Gambit make friends? And can the not-so-dynamic duo solve the case before the killer strikes again?

Curious crimes, engaging characters, and a lovable dachshund. Coffee House Capers are perfect for all dog lovers, some comic book fans, and cozy listeners alike. With a male sleuth and canine partner, it's reminiscent of The Cat Who, but set in a quaint modern-day Coastal Florida town.

Four humorous stories to enjoy, the next one is even better, as is the next. Enjoyed them all. With good narration by Kafer added to them Given audio for my voluntary review

Coffee Shop Capers is a fun and entertaining collection of cozy mysteries. I'll admit after the first book I wasn't very impressed. However, I really enjoyed the second, third and forth books. Each book got better than the one before it. I really enjoyed these books and look forward to other books in this series.