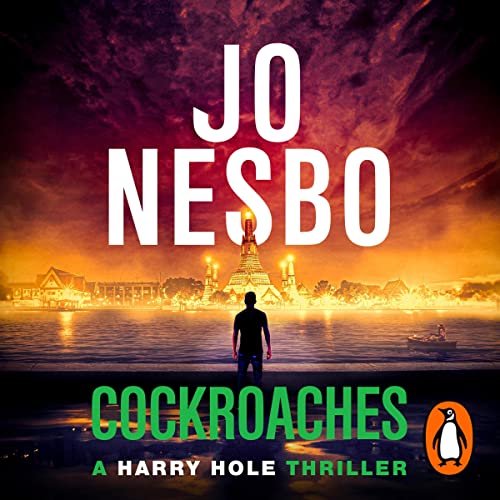 Harry is on a special mission.

Detective Harry Hole arrives in a steaming hot Bangkok. The Norwegian ambassador has been found dead in a seedy motel room, and Harry has been sent to investigate. It’s clear that the Ambassador’s family are hiding some secrets of their own, but few people are willing to talk. He needs to solve a crime and avoid a scandal.

When Harry lays hands on some incriminating CCTV footage, things only get more complicated. The man who gave him the tape goes missing, and Harry realises that failing to solve a murder case is by no means the only danger that faces the unwary. But in an unfamiliar city, who can you trust?

Returning to an earlier time has its advantages and its disadvantages. On the upside, you know the characters well (perhaps better than the author would have intended). On the downside, the story is not as fresh because you have read hints of it before and the plot lines are a little less mature (from a developmental perspective). Both of these attributes were apparent to me in this listening.
Overall, I felt the book suffered as a result and if I'd had the opportunity to read it in sequence I would have been less critical and more comfortable with the plot. As it was, I thought the plot was a bit too obvious. I picked the villian very early and the false scents were not enough to throw me off the trail. The last Nesbo I listened to before this one was less obvious, I feel sure. Of course, Harry is more advanced as a character now too, so this was a throwback to a troubled soul at the beginning of a path toward redemption.
By now I am very comfortable with Sean Barret's characterisation. There can be no other Hole for me. I am an official convert!
I'm pleased I listened to this title, at least so I have all the pieces to date. I am looking forward to re-visiting a slightly more mature and maturing Harry in future installments. No doubt there will be falls from Grace, but Harry is a good metaphor for human fraility. It will be like renewing contact will an old friend. I'm hoping.

Perhaps it is unwise to publish books out of the order in which they were written..but that is exactly what I would have changed. I have read that this was not a choice made by the author of course. Even if this novel was extensively reworked and/or re-translated, it remains a far lesser work than the subsequent novels by Nesbo.
How heartening to know that his writing could and did improve.

Very very tough to say. I have downloaded two more novels and been repelled by the narrator of one and the unmitigated morose content of the other.

My time was spent selecting the films from which so many of the scenes appeared to have been borrowed. The "climactic" almost last scene was utterly redolent of the film " Bladerunner" which accomplished the mood and emotion a tonne better. Sorry. It seems disloyal to say this about an author who did better, later.

Do you think Cockroaches needs a follow-up book? Why or why not?

Please. No. This is a squalid little story with such cardboard cut out figures populating a steamed up cellophane background..except the huge potential Nesbo discovered in the self destructive Harry Høle. Thankfully Harry was salvaged along with a couple of the more substantial, embryonic characters.

For anyone interested in learning a lot about how to make huge improvements in plotting narratives and character development, you would need to look no further than this series of novels. The author's upward trajectory from the insipid, silly " The Bat" through to the more mature novels in this repertoire is hugely interesting. It seems a rare experience to be able to witness such improvement in this genre. Most of the other proponents I am aware of hit a mark first up and then churn out more of the same.

If you could sum up Cockroaches in three words, what would they be?

Maybe not the very edge, but the suspense was there along with my curiosity to know more.

Having read the rest of the Harry Hole series prior to reading Cockroaches, I found this to be a giant "flashback" to a character I already knew. It added some background to the other books. The book reamiand a compelling read full of all the interesting twists and wonderful language of Jo Nesbo and Don Bartlett.

Cockroaches is a real one! 🔥

I have read several books in Nesbø’s Harry Hole series, this might be the best story yet! I will not give any hints or clues in this review because it is so well worth the time read or listen to. Jø Nesbø is an EXCELLENT storyteller! ⭐️⭐️⭐️⭐️⭐️

I thought about skipping this 2nd book in the series because the write up did not sound all that appealing. It is a decent story moves that kept my attention and worth a listen.

while I was engaged I was also very aware of the formulaic nature: obvious human failures of hero who comes good on difficult case in a foreign country, sex industry & murder, solves mystery despite home & foreign country attempts to brush over things, back to mire of depression & self loathing.
Will the next one be different? not sure I could get through 9 in the same ilk!

Some of the characters voices were a bit cringe but otherwise I have really enjoyed listening to this book. Liked this one more then ‘The Bat’. I think the Harry Hole books get better and better over time.

Fantastic book with a great performance.
Highly recommend this to all fans of crime fiction.

Would you listen to Cockroaches again? Why?

maybe at a later date it was a resonable story

no it was a good story though