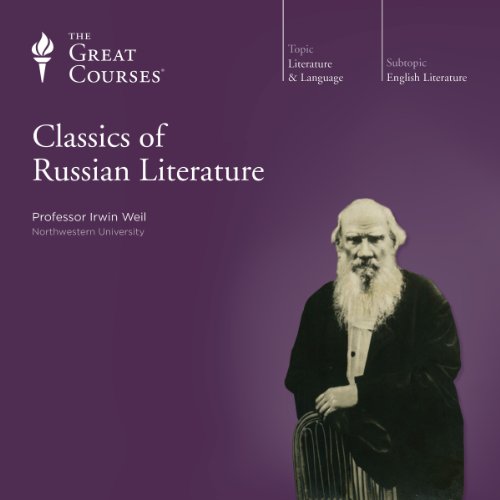 Russian literature famously probes the depths of the human soul, and in this series of 36 insightful lectures prepared by a frequently honored teacher legendary among educators in both the United States and Russia - you probe just as deeply into the extraordinary legacy that is Russian Literature itself.

In all, you plunge into more than 40 works by a dozen writers, from Aleksandr Pushkin in the 19th century to Aleksandr Solzhenitsyn in the 20th century. You also investigate the origin of Russian literature itself, which traces its lineage back to powerful epic poetry and beautiful renderings of the Bible into Slavic during the Middle Ages.

All of these works are treated in translation, but Professor Weil does something very unusual in the literature-in-translation arena. For almost every passage that he quotes in English, he reads an extract in the original Russian, with a fluent accent and an actor's sense of drama.

Jump in The Troika for A Ride with Dr. Weil!

When I first read--and was deeply moved by--Brothers K four months ago, I very much wanted to learn Russian and read the book in its native Cyrillic. Ohio native Irwin Weil actually followed through on that exact feeling on his first read of Brothers K, making a 40+ year career out of the effort (a career that spanned the Red Scare of the '50s thorugh current day). What Dr. Weil packs into this course is as about as dense as it gets for an audiobook.

I read five major Russian titles before coming across this course--an excellent prerequisite. Without those under my belt, this course would have felt like a fire hose of book summaries. But note: this course is as much about Russian history as it is about the literature. Where did the Cyrillic alphabet come from? What does 'tsar' actually mean? Who exactly are the Cossacks? What types of cultural dissonance did the Soviet Union create amongst its people? These questions and more are answered in this course, allowing the student to develop a greater appreciation for the written works.

Certainly this review wouldn't be complete without a nod to the passion of Dr. Weil. Northwestern University has an absolute treasure in this man; I couldn't imagine a better person to record this Great Course for the English-speaking audience to appreciate for years to come. The spoken Russian, the signing, the companion PDF--his knowledge on Russian culture is wonderfully unique and seemingly limitless.

This lecture has spoilers for most any book discussed--I intentionally skipped the lectures on Fathers and Sons, Anna K, and Dr Z because of my intent to read those titles in the near future. Once read, I'll come right back to this course to hear Dr. Weil's analysis and insight. Another knockout title by The Learning Company.

Being a recent college grad, I think professors are getting used to the idea that their students aren't going to read the assigned literature. Instead of teaching the books at a deep level, connecting themes and ideas, the professor simply summarizes the stories. There is a bit of historical and cultural background, and that part is appreciated, but too little is provided.

I’m not sure whom this course is for. The professor is learned and engaging, his Russian is beautiful, but...

I had read many of these books, so while it was still fun to listen to, these courses are basically just summarizing the novels, including the ending. For the Turgenev and some books I hadn’t read, I now know the ending so what’s the point in reading them? (There is a point, but the tension is gone)

So, I guess this is for people who haven’t read the books, don’t want to, but want to know the basic gist?

The biographical details on the authors are interesting, if sometimes repetitive, but the first Pasternak course really made me annoyed. It focused on his beautiful translations of Shakespeare, which I’m sure are really beautiful, especially if you know russian, but I wanted to hear more about Pasternak’s own poetry! Save the singing of Shakespeare songs for the Shakespeare course.

So overall, it was nice to listen to, but to me it was more of a book podcast than a great course.

Really liked the professor though, he was clearly very passionate and kind of made me want to learn Russian!

What did you love best about Classics of Russian Literature?

Professor Weil is extremely enthusiastic about the subject and very creative in the delivery of his lectures. He is passionate about Russian literature in the highest degree. If you are looking for an introductory and colorful monologue about Russian writers and books this lecture set is the best beginning. Listening to these lectures was really very entertaining. I liked his singing (yes, he sings occasionally during lectures!) and declamations of poetry in Russian.

Would you be willing to try another book from The Great Courses? Why or why not?

I like The Great Courses lectures. Own many of them mostly on the topic of religion, history, and literature

Unfortunately, I have to add some negativity to my comments to explain my three stars. I happened to know very well Russian classical literature and Russian history of XIX and XX century. During the course of these lectures I was for so many times taken aback by all kinds of errors, inaccuracies, and misrepresentations in author biographies, writings, citations, historical facts, and their analysis that I ended up with more negative opinion than I hoped for. Many of Professor Weil's historical excursions and literature analysis are based on stale stereotypes and Soviet time assumptions, myths created either in Soviet Russia by authorities as well as by the opposition or in the West.

I'm Russian and I've studied Russian literature in school. And I didn't expect much from this book, as the author is American. But it exceeded my expectations greatly. The course is somewhat different from what they tell you in Russian school, but it's very deep, full of respect to Russian language and Russian people, and it explains the historical and cultural context behind every book. Absolutely great listening.

This is really special!

Who was Gorky? What made Tolstoy tick? Why was Pushkin a great poet?
If you have any interest at all in great literature, get this course! Prof. Weil not only delivers a compelling study of these and many other authors, but does so in English and Russian (which he speaks so beautifully you might feel compelled to try it yourself). The history and literature of this tragic country has never been told with such understanding and respect ( governments not withstanding). I can not recommend enough! Get this book! But be ready, now its time to listen to War and Peace, Dr Zhivago, The Brother Karamazov, and The Gulag Archipelago, and about fifteen others! Can't wait!

Leaving Bulgakov out of a Russian Lit Lineup is pretty much akin to leaving Iron Man out of an Avengers movie.

That aside, I loved this course. The only downside was the lack of coverage of Bulgakov, as a result of his being banned for so long in the Soviet Union (and virtually unknown in the west at the time the professor was working on his PhD). The author didn't so much as mention him.

This covers everyone from Pushkin to Solzhenitsyn, providing incredible historical context, perfectly pronounced Russian phrases and poems, and an in-depth walk through *almost* all the best Russian works.

I lived in Ukraine for 10 years, and this course still opened my eyes to a lot more about the Russian culture I was unaware of. It's brilliant, funny, educational, and insightful. Anyone vaguely interested in the history and/or literature of this part of the world should pick this up now. 36 amazing half-hour lectures for one credit is a steal!

professor's tone and pacing was not pro

Ideas were better than the presentation. Nothing much new here and plot summaries took up most of the lectures -- I was looking for more advanced critical ideas. Perhaps if you had no background in Russian Lit, it might work. Professor was very knowledgeable, but he just did not treat his audience with much rigor.

I'm headed to Russia in a few months. I have read several Russian novels over the course of my life but wanted to learn more. This teacher was so pleasant to listen to. I learned a lot, and will read more Russian novels. You don't need to be a scholar to enjoy this course.

Like professor Weil, I became fascinated by Dostoevsky way back in high school and the Grand Inquisitor floored me, even back then. I have read some of the literature included in these 36 lectures, but certainly not all, and will now go back and study further. Professor Weil is clearer as passionate about the Russian language as he is about the subject. He also has a surprisingly pleasant singing voice, which adds to the presentation. Certainly worth the time and I appreciate his expertise in this area and I am impressed by how well he speaks the Russian language.

A very good way to learn about Russian Literature

This is a very nice course. It gives a great introduction into classic Russian literature. In the course, many important works of literature are summarized and the Professor gives not only the English translation but also the Russian original to provide an insight into the rhythm and melody of Russian poetry. This is enjoyable and the enthusiasm of the Professor is very authentic. Sometimes I find the language a bit repetitive, but this also gives it the feel of a real lecture where the professor just talks to his students. I would have liked to learn more about the more contemporary literary scene in Russia but I suppose a course called "classics" cannot be expected to provide an insight into recent developments.