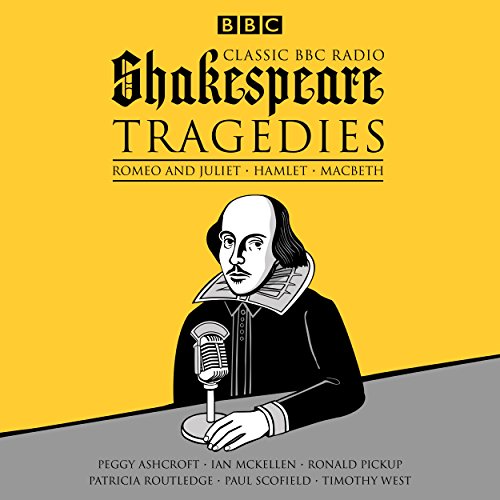 Three powerful radio productions from the BBC archives starring Ian McKellen, Ronald Pickup and Paul Scofield and a host of celebrated acting talent. These three legendary plays, performed by some of the best-known theatrical actors of the 20th century, are the perfect way to commemorate England's greatest dramatist.

Romeo and Juliet: the Montagues and the Capulets are sworn enemies, so when Romeo Montague falls in love with Juliet Capulet, tragedy ensues. This fateful tale of two young star-crossed lovers is one of Shakespeare's most popular dramas. First broadcast in 1970, starring Ian McKellen as Romeo.

Hamlet: one of the most powerful, influential and thrilling tragedies in the English language, and the story of Prince Hamlet and his quest for vengeance never fails to enthral. First broadcast in 1971, starring Ronald Pickup as the Prince of Denmark.

Macbeth: the notorious 'Scottish Play' is a gripping tale of vaulting ambition, witchcraft, madness and murder that has kept generations of audiences spellbound. First broadcast in 1966, starring Paul Scofield as Macbeth and Peggy Ashcroft as Lady Macbeth.

Recorded at BBC Broadcasting House and featuring the BBC Drama Repertory company, with specially composed music including a score from the BBC Radiophonic Workshop, this is classic radio drama at its finest. Duration: 7 hours 30 mins approx.

I have not listened to all three plays, but Macbeth is definitely abridged. Lines are skipped over here and there and one whole scene was missing. Also, the delivery is laboriously slow in spots.

Would you recommend Classic BBC Radio Shakespeare: Tragedies to your friends? Why or why not?

I have listened to several other recordings of Shakespeare's plays and this is one of the worst.

The characters were well voiced although I disagreed with some interpretations. That's Shakespeare for you.

Was Classic BBC Radio Shakespeare: Tragedies worth the listening time?

Unfortunately, I'd have to say this was not worth my time.

As a first time Shakespeare "reader", I loved the storyline, but struggled because I was never clear on which voice beyond to which character. I ended up finding the best solution was to read the sparknotes plot overview then listen and I could follow along and appreciate the dialogue more.

Why you should read reviews

I bought this to listen to while reading the book. The 2nd scene in Macbeth and they’re omitting lines??? No where does it say this is an abridge version. Can here to write this review and saw someone had already said this so read the reviews! Everything was great until that.

Superb recording with one reservation

These are great performances. I would like to request that Audible list the full casts of each play. In its current form, it's possible to discover the names of only Paul Scofield, Peggy Ashcroft, and Ian McKellen. This is a limitation that could be easily removed.

To much sound variation

On stage, a dynamic range of volume is exciting. In my headphones, after cranking the volume to hear the whisper of some madman, the blasting trumpets of battle were too much. Also, while the performance was great, this isn't the sort of thing you can pick up to gain an exposure to Shakespeare. In a script or on stage you have done clue as to who is speaking. I enjoyed the one liners but I have no more understanding of the titles than when I started

Some lines omitted and/or changed

It was a different version than what I am use to, but it was ok.

These tragedies are wonderfully performed. Sometimes I find listening to Shakespeare's plays on audio book to be difficult because I have trouble telling the difference between the performers. This felt like a large professional cast and it really made it a fun and interesting listen.

Great narration. Romeo and juliet was my favourite. Hamlet surprised me as a close second favorite. Macbeth had some music that was too loud at times. Overall a great experience