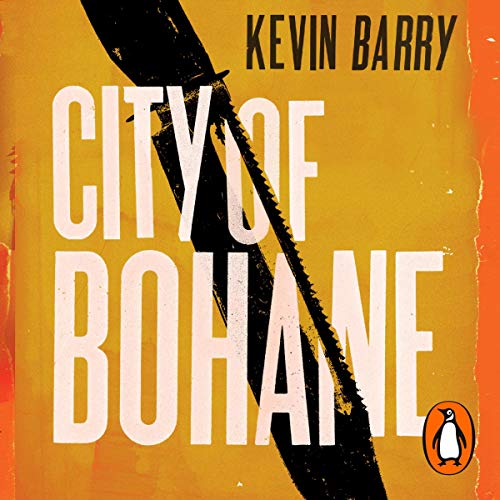 Forty years in the future. The once-great city of Bohane on the west coast of Ireland is on its knees, infested by vice and split along tribal lines.

There are the posh parts of town, but it is in the slums and backstreets of Smoketown, the tower blocks of the Northside Rises and the eerie bogs of Big Nothin' that the city really lives.

For years, the city has been in the cool grip of Logan Hartnett, the dapper godfather of the Hartnett Fancy gang. But there's trouble in the air. They say his old nemesis is back in town; his trusted henchmen are getting ambitious; and his missus wants him to give it all up and go straight... And then there's his mother.

Tight story, lush language and a just as much (if not more) of a pleasure to listen to the author as to read his work. Pure outrageous love and sorrow. Rash revenge, delicious decadence and slow slides into madness and melancholy. And oh does this language linger. Bravo performance!

Dripping in Irish Gothic, you check me?

Kevin Barry powers a narrative with description so arresting you’d think you were watching a Cirque de Soleil show rather than listening to an audio book. A genius of color and mood.

Great book. A little difficult to translate all the Irish slang, but the book is more about an overall feel. Loved it!

Nice book, great reader. Lots of interesting Irish slang. I wish there was a glossary.

I enjoyed listening, mostly because of the reader and descriptions of people and places, but was a bit disappointed overall with the story.

I did not enjoy the plot/story.
difficult to finish
I would not recommend
beautiful description of characters clothes