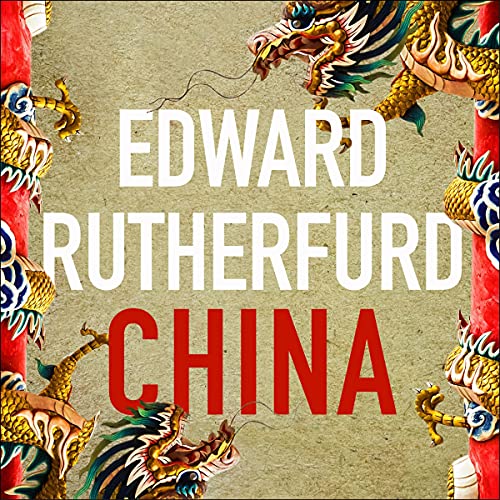 The internationally best-selling author portrays the great clash of East and West in his new epic: China

China in the 19th century: a proud and ancient empire forbidden to foreigners. The West desires Chinese tea above all other things but lacks the silver to buy it. Instead, Western adventurers resort to smuggling opium in exchange.

The Qing Emperor will not allow his people to sink into addiction. Viceroy Lin is sent to the epicentre of the opium trade, Canton, to stop it. The Opium Wars begin - heralding a period of bloody military defeats, reparations, and one-sided treaties which will become known as the Century of Humiliation.

From Hong Kong to Beijing to the Great Wall, from the exotic wonders of the Summer Palace and the Forbidden City, to squalid village huts, the dramatic struggle rages across the Celestial Kingdom. This is the story of the Chinese people, high and low, and the Westerners who came to exploit the riches of their ancient land and culture.

We meet a young village wife struggling with the rigid traditions of her people, Manchu empresses and warriors, powerful eunuchs, fanatical Taiping and Boxer Rebels, savvy Chinese pirates, artists, concubines, scoundrels and heroes, well-intentioned missionaries and the rapacious merchants, diplomats and soldiers of the West. Fortunes will rise and fall, loves will be gained and lost.

This is an unforgettable tale told from both sides of the divide. The clash of worldviews, of culture and heritage, is shown in a kaleidoscope of jaw-dropping set pieces. China is a feat of the imagination that will enthral, instruct and excite, and show us how things once were, and how the turmoil of the 19th century led to modern China's revolution and rebirth.

"The unparallelled master of the historical saga returns, this time, with an eye on China. Beginning with the First Opium War in 1839 and continuing through the present day, Rutherfurd tells a sweeping tale that brings to life a nation's history, traditions and the people who lived through it as if by magic." (Newsweek)

As an expat currently living in China, I was instantly drawn to this novel, particularly after reading some of Rutherford's other works.

It's a pity this novel only covered a relatively short period in China's history and unfortunately doesn't cover the revolution or the formation of the CCP but certainly goes someway to show the events which shaped the future centurary.

If your a fan of historic fiction Rutherford never let's you down with his character development and intertwining story lines and this novel is no different.

Totally Epic... was worth the long wait

It didn't cover the numerous generations as other Edward Rutherford historical novels, but enjoyed the view of the different angles of the same timespan over the century it did cover. The chapters having different narrators, with what seemed to me real Chinese pronunciation made it feel like we were there!

Not as good as the rest but still great

China is typical Edward Rutherford. It is well researched and richly portrayed. The characters are excellent.

The only reason I didn't give 5 stars for story was that I wanted to know more Chinese and less Anglo. I felt that the Anglo folk were largely irrelevant, to the story that is, not to the history of course.

The narrator was truly wonderful. The only thing that bothered me is that during the narration of the eunuch part of the story the narrator makes an annoying and intrusive little "click" at the end of sentences. To begin with I thought it was an issue with my equipment but quickly realised it is teeth clacking or something. It really is annoying but, the rest is so good. So four stars, they lose one for the clicks. ;)

a good Rutherford but lacking the atmosphere

it is a sound and very enjoyable Rutherford, with many aspects I value; depicting the awfulness and not the 'glory' of battle, Tracking intertwining human trails, who's paths are marked by previous generations.
alas, he is lacking here what makes his other books (Sarum, London, Paris, New Forest) so spacial, his intimate knowledge of the space.