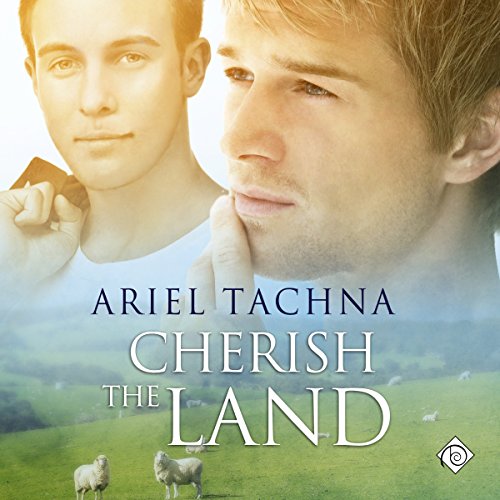 Seth Simms never wanted to be a cowboy, although to listen to his best friend, Jason Thompson, tell it, he isn't one. He just happens to have lucked out in coming to live on Lang Downs with his brother 10 years ago. He found enough stability to finish high school and go off to university, but he never really believed Lang Downs would be the same haven for him that it had become for so many others. He's too messed up in the head. No one would accept someone with his issues.

All his life, Jason has had one goal: to come home to Lang Downs as a resident veterinarian when they need his skills and jackaroo when they don't. And it means he gets to spend time with Seth during his occasional visits, even though his dream of going from friends to lovers is hopeless since Seth is straight.

When Seth unexpectedly comes home to stay, Jason takes it as the boon it is. But juggling a relationship with another jackaroo and his friendship with Seth isn't easy, and that's before Jason realizes how deep Seth's issues run and how dangerously Seth chooses to cope with them.

Narrator does a great job with great story

Seth and Jason have been friends for the last 10 years. Seth has had a very hard time over those 10 years and is very untrusting of any happiness in his life. Both Jason and Seth find themselves newly single and when Jason’s most recent ex lets it be known that he’s jealous of Jason’s crush on the “straight” Seth, Seth finally allows himself to acknowledge his feelings for Jason.

With so many gay couples around, Jason and Seth’s relationship isn’t something to hide, but Seth can’t trust it and has other secrets that he is hiding. When threatened with the truth he runs, and Jason has to decide if being in a relationship (more than a friendship) with Seth is something he wants to risk pursuing.

For fans of the series, seeing Jason and Seth together as well as all the other couples is a breath of fresh air. This is a very nice “ending” for everyone involved, and though there is a bit of angst surrounding Seth’s emotions and Jeremy’s land, most of this feels like the tying up of loose ends. That being said, there is enough story here that it can be a standalone and you won’t feel lost, but I do recommend the entire series.

Ariel Tachna is a gifted writer who really knows how to make her characters feel like real people and Jason and Seth join Cain and Macklin in the group of men we’ve come to love on Lang Downs.

William James does a fantastic job with this. He narrates in “American” and gives the dialog an Australian accent that I found wonderful. (I have no idea how it would sound to a native, but I loved it.) He adds emotion to the story and really makes the story come alive. I’ve really enjoyed listening to this series and highly recommend it.

For both the audiobook and the story 4.5 of 5 stars

Enjoyed the story. Was a good wrap up for the series with a possibility of adding more. Didn't have quite the same feel as some of the previous books, but worth reading.

The end of an era

I have been looking forward to Seth and Jason’s story for a while now. I liked the idea of best friends being in love with each other but both also totally clueless about the other’s feelings. Hiding it for fear of rejection. Add in some self-harm and this book was calling for me for a long while. There’s just something about troubled characters that draws me in. Jason has lived on the station for his entire life, it’s his home, and it’s where his family is. And apart from going away to uni to become a vet it’s all he’s known, all he wanted. Until one day when he was fifteen and Seth and his brother joined the station. Instant best friends and soon thereafter the crush to end all crushes. He know nothing can happen though, his best friend is straight, and he’d rather have him as a best friend than nothing at all. Seth recently made a huge decision in his life, breaking up with his girlfriend of three years and deciding to head back to Lang Downs, the only place he ever felt like he belonged. City life just isn’t the right fit for him. He’s also decided to take a chance on Jason, finally telling him that he was bi, and not only that – was also in love with him. Things doesn’t work out as planned, when he arrives home Jason is already seeing one of the jackaroos leaving Seth to try to mend his broken heart. Sadly Cherish the Land wasn’t everything that I wanted it to be – but isn’t that also the danger with expectations? I expected and wanted Seth and Jason, to feel their longing, the passion. Tachna didn’t quite get us there with her words. Sure she told us how they (and we) felt, were supposed to feel, but we couldn’t be there for it. It wasn’t in the pages and that’s just not enough for me. I want more of a connection. I want to be there and feel it. I never felt any depth to the story or characters, the intent was there for sure but the plot was all a bit too scattered for it to really happen. This in turn made me feel that their relationship was lacking, that there wasn’t any deep connection part from friendship between them. What also bugged me was the speed of their relationship; it went from (believed) unrequited to first kiss to moving in together in just a few days. It also felt a bit like this book suffered a bit of an identity crisis, of who this book was supposed to be about. Now I know that for all of the prior books (part from the first one) have had multiple POV’s and not only the main characters. Those times were annoying sure, but they were short interludes to catch up. In this book there is a sub-plot involving Sam and Jeremy that at times takes up more space than Seth and Jason do. Sure it was interesting and I enjoy the couple and wanted to know all about it, but this book wasn’t the place for it. I think that it would have been better suited as a novella where we could delve deeper and have more of a coherent story. As it stood now there was no real flow of the story, it was jumbled and miss-matched and it kept me from becoming invested, to feel for the characters like I wanted and had hoped. As previously, I loved William James Aussie accent. Loved his voices and feelings he added to his narration. Some parts of the books sounded very stilted, there wasn't any natural flow of the words. I don't think that was due to James's narrations as such, but more on choppy writing. It wasn’t all the time, but it was still noticeable when it happened. I do know one thing for sure, and that is that I’m going to look for more of his narrations to listen to – possibly even another Aussie book. It’s been a nice journey to take with these men and I’ve, for the most part, enjoyed the hours I spent listening to their stories. However I can also say that I’m ready to say goodbye and leave them to their lives, to pick up the next set of strays and just in general living their happily ever afters. A copy of this book was generously provided by the publisher in exchange for an honest review for Love Bytes.

This is a series. You can read alone as each book is mainly about a specific couple, but the overall story does touch on some unresolved issues from previous books or the overall ranch. I would advise in this book that reading the series may be in order, so you know who Jason and Seth are.
Jason has always lived on Lang Downs. His father is the shop manager and mechanic.
Seth came when he was a young teen and Maclin, and Cain saves his older brother Chris from a gay beating in town. Jason has always had a thing for Seth. Seth though he is his best friend had liked girls and dated when he got older. Jason went away to Vet school as he always dreams and Seth went to Sydney to mechanics school. Jason always figured Seth would come back but he moved in wth a girl in Sydney.
Set finally decides to go home and see what will happen wth Jason to find him with a Jackaroo and it looks like they have a decent relationship.
One great thing about this series is it's about the family dynamics of the life on the Station, not just the characters. We also get another story a much sadder one with Jeremy and Sam. Jeremy gets a call from Taylor Peak the neighboring station and Jeremy's home that Devlin, his homophobic brother that kicked him off the station has had a critical accident. Things get so sad here. I cried and cried.
There is so much going on but its fast paced and attention grabbing. I couldn't turn it off once I started.
The story is beautifully written, Heart wrenching et sweet and sexy as well.

William James is the perfect voice for this story. He brings the characters to life, and he brings the station to life. I have listened to all five of these and couldn't imagine a different voice for the characters. William can make you cry , laugh and sigh in the proper place. I love the charming accents and even the attempts at the women's voices.
If you like cowboys( or sheep ranchers, foreign stories, Heat breaking yet happy stories, and a great all-over romance I highly recommend this series.
Get them all and listen to them while you do your chores. Its a great time to pass away the day with a sweet romance.
I wish this series wasn't over. I am hoping maybe more in the future, please!

I have to say that while I really enjoyed the two men and the way their story came together, I didn't particularly like how much of the Taylor's story we got. I understand that it was necessary, but sometimes I just couldn't wait for their part of the story to be over so we could get to our boys.. well, the men they'd grown into.

I loved that we'd seen these boys together in the previous books and as they grew up and then we got to follow along as they got their happy ending. This was a nice conclusion to the series as we got to see everything all wrapped up with a pretty bow and everyone was happy.

I can say that I am a fan of Ariel Tachna after reading this series. She has such a wonderful way of writing romance that also has a hefty dose of reality and work thrown in. The characters are all different and have their own issues to deal with and they do so in their own unique way.

The narrator did an EXCELLENT job with the book and I know I will be looking for more books narrated by William James in the future.

This Series Was Wonderful

All the books in this series were well done. Most series I lose interest by the 3rd book... with this series, I listened to all 5 of them. Relistening to all of them for the soothing quality of the narrators voice.