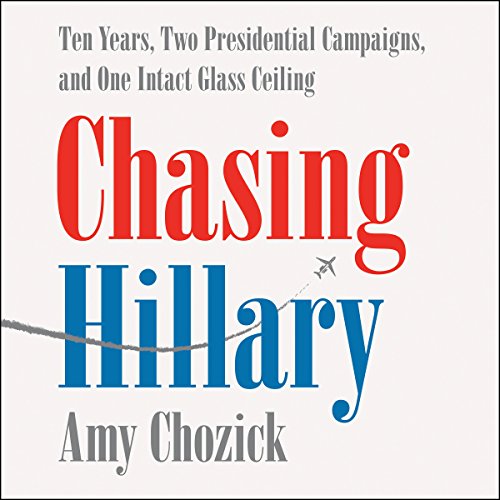 For nearly a decade, Amy Chozick chronicled Hillary Clinton's pursuit of the presidency. Chozick's front-row seat, initially at the Wall Street Journal covering Mrs. Clinton's imploding 2008 campaign, and then at the New York Times where she was assigned "The Hillary Beat", set off a years-long journey in which the formative years of her twenties and thirties became, both personally and professionally, intrinsically intertwined to Clinton's presidential ambitions. As Mrs. Clinton tried, and twice failed, to shatter "that highest hardest glass ceiling", Chozick was trying, with various fits and starts, to scale the highest echelons of American journalism.

In a rollicking, hilarious, dishy narrative, Chozick takes us through the high- (and low-) lights of a wildly dramatic presidential race. But Chozick's unique vantage point and candor lift the veil from the story we thought we all knew. Here is the real story of what happened, with the kind of inside detail that constantly surprises and enlightens.

But Chasing Hillary is also the unusually personal and moving story of how Chozick came to understand Clinton not as an unknowable enigma and political animal, but as a complete, complex, person, full of contradictions and forged in the crucible of political battles that had long predated Chozick's years covering her. And as Chozick gets engaged, married, buys an apartment, climbs the professional ladder, and inquires about freezing her eggs so she can have children after the 2016 campaign, she dives deeper into decisions Mrs. Clinton had made at similar points in her early career. In the process, Chozick develops an intimate understanding of what drives Clinton, how she accomplished what no woman had before, and why she ultimately failed. And the social fissures in the electorate that would drive angry voters to Donald Trump and blindside Hillary Clinton, unexpectedly bring out the tensions in Chozick's own life - between the red state she came from and the blue state she ended up in, between her desire to climb in journalism as a woman, but be treated no differently than a man.

Mrs. Clinton's shocking defeat would mark the end of the almost imperial hold she'd had on Chozick for most of her professional life. But the results also make Chozick question everything she'd worked so hard for in the first place. Political journalism had failed. The elite world Chozick had tried for years to fit in with had been rebuffed. The less qualified, bombastic man had triumphed, as they always seemed to do, and Mrs. Clinton had retreated to the woods in Chappaqua, N.Y. finally comfortable enough to just walk, no makeup, no pants suit, showing the real person Chozick had spent years hoping to see. Illuminating, poignant, laugh-out-loud funny, Chasing Hillary is a campaign book like never before.

I read “What Happened” the day after it was released and felt, that while it was an apologia of sorts and an indictment of so many-I was encouraged by the suggestions of what could still be “coulda, woulda, shoulda..”. Amy Chozick has written the chronicle, memoir and story that is funny and gut-wrenching at the same time. She has written her story (Herstory) as well as mine. It’s a must read. Thank you , Amy. With all best wishes to you, the wonderful Bobby, and your baby.

Chasing Hillary is all about the 2008 and 2016 campaign from the perspective of a reporter in HRC caravan. During the campaigns, If you want to why HRC didn't speak at Notre Dame when offered, How Robby Mook help orchestrate the disaster, and how HRC was really on another planet after 5 years as Obama's Sec. of State, and more... Amy has the goods.

I thoroughly enjoyed listening to Amy Chozick reading her book Chasing Hillary. Ms. Chozick does a terrific job balancing personal anecdotes with solid information on how campaigns are covered these days, especially by the New York Times. As a former reporter, I found it fascinating. As a voter, it explained so much that confounded me about the entire campaign and its candidate. (Ms. Chozick is also great at narrating her own story.) One of the most interesting chunks of the book is Ms. Chozick's analysis/feeling about the way the final days of the campaign were (mis)handled. One anecdote alone - a stop at a Wisconsin Anthropologie store, followed by Ms. Clinton's abandonment of the state - should be taught to all politicos as how *not* to win votes and influence people. Given the choices in the General Election, I'd vote for Hillary again, but this was a rigged game. I hope the Democrat Party leadership reads - or listens to - books like Ms. Chozick's, and realizes that the American people don't want the Party leadership's and Super Delegates' anointed choice; we progressives want to choose our own. (Yes, I know it can be like herding cats, but sometimes democracy can be messy.) Democrats like Uncle Joe? Step up. Democrats like "Prince Harry" Reid? Step back. Well-done, Ms. Chozick. Very well-done.

Chozik is fair and funny ... she seems to be a journalist who really just wants to get the story out there. She did not seem to slant anything, she just told what she experienced. The book is very entertaining, and sobering.

I bought this book, to get a better understanding of WHY anyone would support HRC. I enjoyed it and do feel enlightened. It was also fun to just relive that amazing election year. Thanks Amy

it's amusing the book reinforces her suspicuon

The 1star reviews seem mostly to come from pro hikdawg people annoyed that it made Clinton look bad, despite the book heaping praise on her accomplishments and giving reason to her mistakes. "My positive stories disappeared as soon as they were published but bathroomgate never left their minds good on the ground recap of a person's life in the Clinton bubble

I loved the book, and inside scoop of the campaign! Amy wrote a terrific book and her narration is very entertaining - particularly good Bill Clinton voice and her Hillary was on point as well.

A detailed look into a fascinating life regardless of your views on the subject.

I’d recommend this to most news/politics junkies. The title basically gives away the story, but the details and storytelling make it a fun read. I really enjoy hearing the author read the book in her own voice.

I feel like writing a note to Amy (the actor) and telling her that I just read her last book and hope it is. This book was about Amy and it was so boring I could not finish it.

Fantastic analysis of the Clinton campaign

Before you dismiss this review as "just a trump supporter bashing Hillary", you should know I voted for Hillary. While I voted for her, I often found that I just wasn't passionate about her campaign. Chasing Hillary lays out exactly what I was feeling and why. Hillary was out of touch and didn't have a clear message for why people should vote for her. She instead laid all of her bets down on why people shouldn't vote for Trump. I really enjoyed this look back on one of the most surprising elections of the past 50 years.