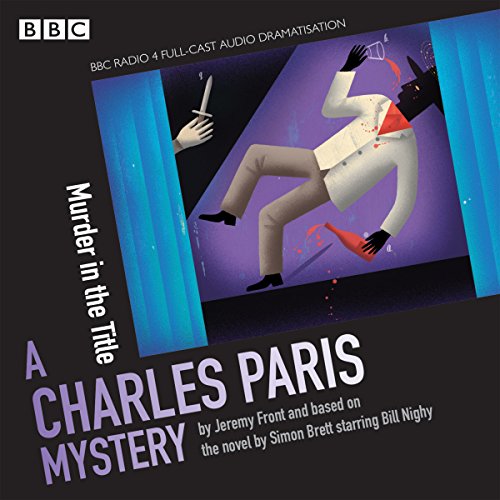 Charles Paris: Murder in the Title

Charles Paris is his own worst enemy, a louche lush who can resist anything except temptation - especially in the form of women and alcohol. He’s been out of work so long now he feels he may never get a job and he’s driving Frances, his semi-ex-wife, mad.

So when he’s offered a small role in a play, she nearly pushes him out of the door. But it seems that ‘The Message is Murder’ is such a terrible production that someone wants to kill off the cast. First there is a series of nasty accidents, then someone attempts to stab Charles.

Can he find the murderer before they strike again?

Bill Nighy stars as Charles Paris in this entertaining dramatisation by Jeremy Front.

Written by Jeremy Front, based on the novel by Simon Brett.

Where does Charles Paris: Murder in the Title (BBC Radio Crimes) rank among all the audiobooks you’ve listened to so far?

Soundtrack mimics Golden Oldies of Charles Paris's past, reminding us of his age. Dialogue is sparkling.

Have you listened to any of Bill Nighy’s other performances before? How does this one compare?

All Bill Nighy's performances as Charles Paris are delightful, well worth the modest cost...

Only the Colonial Radio Theater performances come close to matching the BBC Radio Crime dramas. Both troupes are well worth snapping up every offering.

These radio plays are good mysteries but Bill Nighy as Charles Paris makes them great. He is witty, unbearable, sexy, hilarious, and mostly drunk. Suzanne Glover as his long suffering wife Frances is absolutely perfect. It's easy to see why they achieved 35 years of "divorce avoidance." They have great vocal chemistry. The rock and roll sound tracks are a big plus. More, please.

Love everything about this series. Characters well acted and entertaining. Charles does it again. Another good one. Enjoy!!!

Fantastic entertainment for travel or a rainy day

I never tire of the Charles Paris . The mix of louche behavior, contemporary music and exquisite performances makes me feel as though I am in the room watching the comedy undold. Perfect for when you want a great story, well told.

As it was made for radio I thought they did a fair job of bringing the characters to life in the short time available; it took a bit of imagination to fill in the blanks but that's what radio is about and why we have the gift of imagination.

Did Bill Nighy do a good job differentiating all the characters? How?

Yes, I quickly came to know who the characters were and how their idiosyncrasies made up their personalities

Could you see Charles Paris: Murder in the Title (BBC Radio Crimes) being made into a movie or a TV series? Who should the stars be?

I don't know....too much realism has hit our screens; I'm not sure this would make it past the first season.

This radio drama is a great listen when doing those humdrum chores around the house.