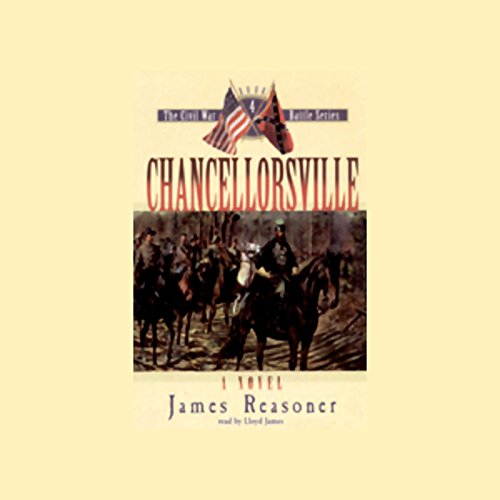 Chancellorsville is the fourth book in a series of historical novels spanning the Civil War and describing its effects on one southern family.

As Cory Brannon has a chance to assist the South with supplies brought in by blockade-runners, back home in Virginia a sense of obligation and duty stirs in the hotheaded Titus, and the Confederate cause claims another Brannon son, this one a gifted rifleman.

In early 1863 a fitful calm pervades the Virginia front until another Union commander is named. Joe Hooker leads his army into the wooded wilderness and confidently stakes his fortunes on an encounter with Robert E. Lee near the roadside inn at Chancellorsville. As the battle rushes toward them, Will and Mac Brannon witness the boldest move a field commander can make and the greatest loss the Confederacy can struggle to bear.

Find out what happens to the Brannon family in the rest of the Civil War Battle Series.
©2000 James Reasoner (P)2003 Blackstone Audiobooks

Did anyone else think that Pie sounds like Forest Gump? I kept waiting to here “stupid is a s stupid does.”

If you have gotten this far into the series you are as bitten by the Civil War Battle series as I am and it keeps getting better. The host of characters are well rounded and by now like friends and I find myself caring about their welfare both while suffering lack of supplies and particularly in the battle scenes which are particularly well written. This is good stuff and Lloyd James is going a great job of narration with each character having his own voice. It brings it all very much alive.

As with the 3rd book - the author has done a nice job of "spreading out" the Brannan family members to get some interesting perspectives of different theaters of the Civil War. Very good description of the battles of Federicksburg and Jackson's death.