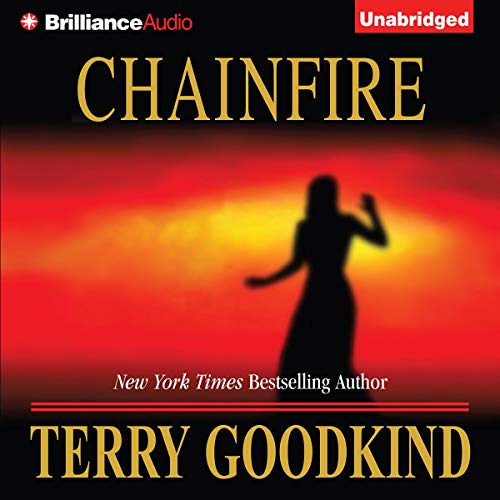 With Wizard's First Rule and seven subsequent masterpieces, Terry Goodkind has thrilled readers worldwide with the unique sweep of his storytelling. Now, in Chainfire, Goodkind returns with a novel of Richard and Kahlan, the beginning of a sequence of three novels that will bring their epic story to its culmination.

After being gravely injured in battle, Richard awakes to discover Kahlan missing. To his disbelief, no one remembers the woman he is frantically trying to find. Worse, no one believes that she really exists, or that he was ever married. Alone as never before, he must find the woman he loves more than life itself....if she is even still alive. If she was ever even real.

Much improved from the Naked Empire

Terry Goodkind spends less time preaching his Ayn Rand derived ideas and more time telling the story. However, there are still significant flaws. While the preaching is much reduced there it still too much of it and it is poorly integrated in to the story. He fails to allow the story to make his points and resorts to having Richard simply "preach" his points. Further detracting from the book is Mr. Goodkind's appalling lack of skill when it comes to writing conversations. It is partly this and partly due to Jim Bond's presentation. The result is that almost every conversation sounds like the village idiot lecturing a slow child. I suspect that most (not all) of the fault is Jim Bond's as Phantom read by Sam Tsoutsouvas is much more palatable. If you like the Sword of Truth series, definitely listen to this book. If you used to like this series and gave up in frustration after the debacle of the Naked Empire (and a few of the books before it), this recording though heavily flawed, is worth hearing to advance the story.

the voice actor was actually terrible.

at point he read in an angry voice where the text specifically says something different. i am glad there is a different actor for the next book. *crosses fingers that richard isn't a know it all in this one too*

Finishing is painstaking process with this narrator. I struggled to finish. I own the book & should have just read it.

I've owned quite a few audiobooks in my lifetime and Jim Bond makes the series almost impossible to get through.

There is a lot of exposition in this story and quite a bit of redundancy. Not enough happens plotwise in and it plods out like a turtle, a long and weary task for the listener (but I am sworn to listen to them all even though I question if there really is enough "meat" to justify the existence of this piece as a separate book, at least not in the form that it stands now). I would advise Goodkind to "show not tell". There are a lot of talking heads in this book and way too much "explanation/conversation". Where are the characters that we fell in love with? {We want Gratch back!} Where is the chemistry? It also feels that this book was created more for the eye than for the ear. And how many times do we have to hear the word "engendered"? I would say unless you are bound and determined to make it through these books through listening (as I am), maybe you should buy the hard copy or e-book version and read it.

Deja vu all over again.

The speeches are long and redundant. The villains the same. Evil's tool is still the same: to threaten one member of the lovely hero couple while the other suffers. And, of course, the most powerful wizard in three thousand years is still impotent. The only time he can do anything is when the story needs him to or it will end. What's more, it's never intentional. This smacks more of divine intervention than the magic every other wizard in the story possesses. Finally, and most annoying, the story now becomes almost identical to the first book.

Poor Richard - he doesn't know magic, and he can't lay with his wife. He's tortured, poisoned, or driven to madness in every book, and Goodkind makes him give the same speech several dozen times in each book. I'm beginning to think that Goodkind thinks I'm stupid.

Don't get me wrong, I embrace his ideals, but his writing treats them inconsistently. After all, if everyone has the capacity for individual excellence, then surely Goodkind can give his readers the benefit of the doubt that they will not forget his mantra after it has been delivered several dozen times. Surely those of us that have made it to book ten get the point.

This had the potential to be a fantastic and philosophically educational epic. Unfortunately, too many sermons and too little action has destroyed it. Nevertheless, I have to see how the lovely couple suffers through their next two ordeals. Who knows? Perhaps Richard will learn how to light a candle.

Terry Goodkind’s nonsensical preaching is nauseating. To quote... the most ridiculous thing I have yet to hear Goodkind write...'Appearance, was a reflection of what a person thought of themselves...and therefore by extension, of others. A person crippled by self loathing or self doubt reflected those feelings in their appearance'
What nonsense! I so regret buying this idiot's books. What a waste of time. I certainly worry about what I am wearing because I want other to understand, BY EXTENSION, what my choice of attire means I think of them.... With each book Terry Goodkind writes, his belief in his own knowledge and Godlike understanding, grows beyond even the limits of fiction...

In this book, I got tired of hearing about everything that happened in the past. If you didnt read the first 8, Oh Well. Your Loss. But I hate to admit, you would think that Richard, after 8 books, would be kick ass, instead of a pussy. The only thing he does well is TALK, and he does too much of that. I loved the first 8 books, but this one is not so good. 2 more to go so I can endure the much unneeded dialogue to hear what happens. (I wish Kahlan would DIE)

I love the series, but find the level of importance placed on two people nausiating. Not only does the current world revolve around Kahlan and Richard, but the world going back 3 millenia has also revolved around them. I'm also quite tired of hearing this character and that character profess their preachy, undying loyalty to Richard. Richard, Richard, Richard......RICHARD, Richard, Richard. "I would sacrifice my life to ensure he doesn't stub a toe." Good grief. If any character in a book were to mimick Jesus, this would be the one. Yet...he can never use his powers. Then she can't use hers. He and Kahlan are always separated and struggling to get back to each other. It's the same never-ending story.

Having said that, I will always admire the different directions Goodkind has taken this story on other levels. There's always older, more powerful, more complex magic to be found. Ah, I love it. Goodkind has also always had the ability to bring the depths of evil and heights of good to life - make them shocking and real. He's not afraid to let the pendulum swing well beyond what other fantasy writers would.

The narration was done quite well for male voices, but the female voices were annoyingly condescending and lifeless. Let's get real, someone with a great male voice will most likely not have a great female voice. lol I really, REALLY wish companies would employ multiple narrators.

Long and drawn out, but the ending made up for it

Same title as my review for the last book. There are not many books I would want to listen to the abridged version, but this is one of them. The story is great and the narration is good. The story line starts with Richard losing something important to him. He gives up everything to get it back. He is faced with an haunting danger while early characters are brought back into the story. The ending gets you ready to listen to the next book.

I 'm so pleased that it is there!