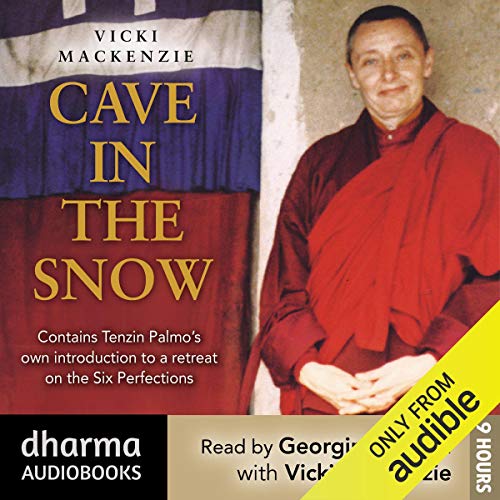 Cave in the Snow

Cave in the Snow

Includes a bonus track of Tenzin Palmo introducing a retreat.

This is the story of Tenzin Palmo, the daughter of a fishmonger from London's East End who became a Tibetan nun. After meditating for 12 years in a cave 13,000 feet up in the Himalayas, she became a world-renowned spiritual leader and champion of the right of women to achieve spiritual enlightenment.

Diane Perry grew up in London's East End. At the age of 18, however, she read a book on Buddhism and realised that this might fill a long-sensed void in her life.

In 1963, at the age of 20, she went to India, where she eventually entered a monastery. Being the only woman amongst hundreds of monks, she began her battle against the prejudice that has excluded women from enlightenment for thousands of years.

In 1976, she secluded herself in a remote cave 13,000 feet up in the Himalayas, where she stayed for 12 years between the ages of 33 and 45. In this mountain hideaway she faced unimaginable cold, wild animals, floods, snow and rockfalls, grew her own food and slept in a traditional wooden meditation box, three feet square - she never lay down.

In 1988, she emerged from the cave with a determination to build a convent in Northern India to revive the Togdenma lineage, a long-forgotten female spiritual elite. Despite her international teaching schedule, Tenzin Palmo maintains a deep commitment to her nunnery, Dongyu Gatsal Ling, in Himachal Pradesh.

" Cave in the Snow is full of extraordinary insights. It is a desert island book - one we can't very well live without." ( Tricycle Magazine)

Audio version is best format for this book

I’m not sure I would've read this book so fast if not for the audio version. The writing is very plain and contains lots of attributions such as “she stated” and “she commented,” like a newspaper article. Also, for those who are unable to read books that take the supernatural seriously (and I’m one such person), it can be difficult to accept all of the Tibetan Buddhism mysticism. All that said, I thoroughly enjoyed the book and learning about Tenzin Palmo’s journey from young woman in England to Buddhist nun. What makes the book so engaging, in addition to adventures like being buried in her cave under an avalanche, is its strong and unapologetic feminism. She vows to attain enlightenment in female form “no matter how many lifetimes it takes.” I especially liked when she made the Dalai Lama cry when she explained all of the sexism women must face when pursuing Tibetan Buddhism. Excerpt: “What she had promised was to become a female Buddha, and female Buddhas (like female Christs and female Mohammeds) were decidedly thin on the ground. Certainly there had been plenty of acclaimed women mystics and saints in all parts of the world, but the full flowering of human divinity had, for the past few thousand years at least, been deemed the exclusive domain of the male. The female body, for some reason, had been seen as an unfit or unworthy vessel to contain the most sacred. Now Tenzin Palmo was publicly announcing she was intending to overthrow all that.” The audio version includes two half-hour talks given by Tenzin Palmo in Israel. Grade: A

This is the book

Cave in the Snow is one of the best books I have ever encountered. I read the book two years ago and just finished listening to this audio book. Tenzin Palmo's story is extraordinary. She is a true bodhisattva who I count as one of my teachers. Her teachings are clear and to the point. The last three chapters of the Audible audio book are an introduction to a Tenzin Palmo retreat on the Six Perfections or Paramitas. A wonderful addition to the book.

A work of perfection. Such a joy to listen to Such an inspiring woman. Thanks

Spiritually enlightening book, a great biography of a great woman.

She is truly inspiring and motivating, she has done something many people cannot dare to achieve.

This book has truly made me change the way I see and live my life. I was only somewhat familiar with Buddhism before this book, but I have learned so much and plan to continue studying.

The best book in the last 10 years

I just could not stop listening....I feel forever changed by her life and comittment. Thank You Pioneer in our female form.

The author vs. the sage

There were some real gems in terms of meditation and the nature of mind in chapter 14. In terms of getting valuable information about meditation, this is a good book because Tenzin Palmo spent a great deal of time in retreat. There were interesting signs of her spiritual capacity that were present as a child and the story is a good reference for people interested in pursuing a spiritual path. It was interesting to know how someone eats and survives on retreat in an isolated cave. It was interesting to know how someone plans/organizes a Buddhist nunnery. Tenzin Palmo was innovative and hearing about how she approached the Dalai Lama and other lineage masters with her innovations was surprising. The sexism of the system and the lamas willingness to admit it and change was interesting. Tenzin Palmo was very brave and opened the door/preserved the possibility for women to be Buddhist in some sense. I wish some of the really good stuff had come sooner in the book. I felt like the book presented things in such a way that there have been no spiritual women or enlightened women until Tenzin Palmo. I felt like a lot of examples of women, like Krisha Gotami, Boudica, the priestesses of Isis, or the tantric cultures or goddess religions the world over in prehistory, that show strong development/leadership by women in the area of spirituality were ignored. The book seems to accept its true that no women have been enlightened and then Tenzin Palmo tries to do it. The book is very sympathetic towards women and gives good account of women's experiences in spirituality in terms of Buddhist nuns and what they tend to encounter, but at the same time, I felt like it gave women precious little credit and delivered a very pathetic story of women through history which I don't feel is accurate. Maybe a more tragic Riane Eisler approach would have been a better flavor for me. The narration was really nice. The voice and tone and aliveness were all very good. This book would be good for someone who is contemplating going on a long retreat in isolation or someone interested in the experience of women on the Buddhist spiritual path is like.

Could have been great, but...

I'm in awe of Tenzin Palmo and was excited to hear about her "Quest of Enlightenment", including an incredible 12-year solitary retreat, but instead what you get is "Quest of Fighting Sexism" and "Quest of Building a Monastery". Apparently Tenzin Palmo does not wish to speak about her meditation practices or what she's experienced / learned. So, what we get is stories of her physical experiences in the cave, such as flooding, lack of food, avalanche, etc and her return to the western world to enjoy pasta and Mozart, but very little about her actual spiritual experience. This book mentions Peter Matthiessen's "Snow Leopard", which I had read and is a far superior book, one that actually lives up to the claim of "Quest of Enlightenment".

Struggled to finish and actually didn't. Narrator was also mediocre. Story line of sexism in the Buddist religion was educational but unappealing to me.