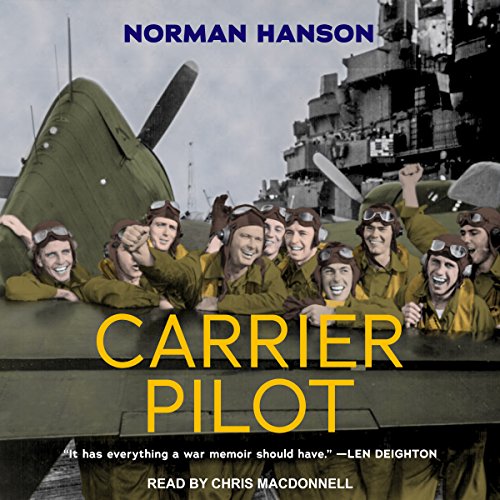 In 1942, Norman Hanson learned to fly the Royal Navy's newest fighter: the US-built Chance Vought Corsair. Fast, rugged, and demanding to fly, it was an intimidating machine. But in the hands of its young Fleet Air Arm pilots, it also proved to be a lethal weapon.

Posted to the South Pacific aboard HMS Illustrious, Hanson and his squadron took the fight to the Japanese. Facing a desperate and determined enemy, Kamikaze attacks, and the ever-present dangers of flying off a pitching carrier deck, death was never far away.

Brought to life in vivid, visceral detail, Carrier Pilot is one of the finest aviators' memoirs of the war; an awe-inspiring, thrilling, sometimes terrifying, account of war in the air.

Lieutenant Commander Normal Hanson was born in 1914 in the village of Keighley, Yorkshire. He served in the Royal Navy from 1941 to 1946. He fought in the Pacific and took part in the Palembary refineries attack and in the Sakishima Islands.

The book is well written and almost reads like a novel. The book was originally published in 1979. It is one of the few memoires about the British Navy in the Pacific.

The book is almost thirteen hours. Chris MacDonnell does a good job narrating the story. MacDonnell is an English actor and audiobook narrator. He grew up in the acting world as both his parents worked for British film director David Lean.

At least here in the US, we don't hear much about the British navy in the Pacific in WW2, and even less about British naval pilots. Hanson does a nice job of recounting his experiences as one of those pilots. There was a lot to learn here, especially for aviation buffs as the author covers his flight training in Florida, his time serving in Egypt and, eventually, his work flying Corsairs from carriers in the Pacific. He mourns the close friends he lost but also, at times, gives very detailed accounts of things like the experience of flying a corsair and the experience of escaping one that had crashed and was sinking. He also, at times, demonstrates a wonderfully dry sense of humor.

I definitely recommend this book if you're interested in military aviation, WW2 naval aviation, Corsairs, or the experience of being a British naval pilot.

Really enjoyed this book! A very interesting and informative story about a carrier pilot. If you're not familiar with a British accent it can be difficult to understand but it also makes it feel authentic

it gets better as you go. you learn the character of the men and it provides insight never heard before

I'm a former Navy pilot and loved the book. it brought back a lot of wonderful memories, especially times in the El Cortez bar!!

A great book. Very detailed book about an area of WW2 that is often overlooked. The British carrier pilots contributions to the war effort in the Southeastern Pacific area.

interesting to learn what they went through. A good book, and well-written. writer gives you good

awesome story and one of the best narrations I have heard on audible. really worth it.

British Corsair in the Pacific?

Nicely humorous account of a deadly serious business, wonderfully read. So long ago, but nothing has really changed.

I've read a lot of books on Naval Aviation and enjoyed all of them, but this was the best. and the narrator was superb!