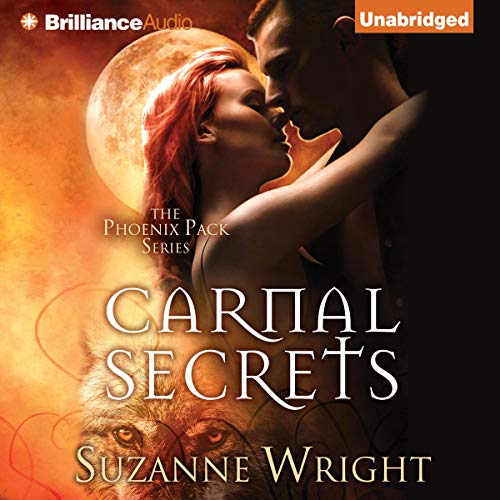 Half-shifter Shaya Critchley may hold a submissive role in her wolf pack, but the petite redhead refuses to let an Alpha male interfere in her life. Furious and humiliated after her mate refused to claim her, she runs off to hide among the humans. Why wait around for an Alpha male to love her when he’d obviously prefer to ignore her?

Nick Axton can barely control his urges for Shaya, but the Alpha can never claim her — not if he truly cares for her. His degenerative brain condition will eventually destroy him, and he’s afraid of turning his mate into his caretaker. Yet when Shaya runs away, Nick can’t let her go. He pursues her, vowing to finally claim his rightful mate. And despite Shaya’s spirited and passionate resistance, Nick’s fiery determination just might be the ultimate aphrodisiac.

As I like the overall series, the stories seem very monotonous. It feels like the same story just with different characters.

Frustrating First Half, but Stick with It

I absolutely loved the first book in this series. I liked the second book a lot. This book didn't quite reach the level of the previous two books, and for me, that problem had more to do with the main female character than anything else.

Shaya is a half shifter, and she has been hurt before. Now her true mate has rejected her. Her wolf is a submissive. She believes that her true mate has rejected her solely because her submissive wolf couldn't handle the role of alpha female to his pack and would be in danger from dominant female wolves who would challenge her position. With the help of her pack, she moves to another town in an attempt to hide away from him.

Nick, the true mate in question, decides that her moving away is unacceptable to him, so he tracks her down and basically camps out on her doorstep. He has his reasons for having rejected her, and they are good ones, but he doesn't want to tell her what they are. He decides he'll just woo her and eventually wear her down.

For her part, Shaya is angry, and she shows her anger by behaving like a jilted teenager. In the first half of the book, I became seriously frustrated with her petulant, childish, manipulative behaviour. Yes, she has her reasons. And Nick, to some degree, deserves a bit of a set down, at least from Shaya's point of view given the information she has about the situation. However, some of the things she does are just, well, childish.

This cat and mouse game goes on....and on....and on... for the first half of the book. Take heart though, because it does get better. There are seriously mean human extremists in the town where Shaya has moved to, and a mysterious pack, and everyone seems to be wondering why Nick, an alpha, is in town. Then Nick's mom and sister show up, as well as the healer from Nick's old pack who has obvious designs on Nick. As the situation comes to a head, the couple confesses their secrets, the relationship drama dies down and the action picks up. At this point, the book gets much, much better.

In hindsight, the book wasn't a waste of my time, but the first half was almost painful to get through. However, the second half made it worth the effort. It still had much of the humour that made the first two books in this series so much fun, but that was tamped down a bit by all the emotional angst in the first part of the book.

The narrator did a very good job. I can't fault her performance in any way.

It was more couples therapy then action...

I liked this book the least out of the series, it's like paging Dr.Phil lets get all of our feeling out in the open. The book is about 90% the couple's incompatible issues and the last 10% and the end of the book is actually some action and danger. Even when Shaya was in immediate danger she goes off into like a 5 page internal monologue about her own trust issues, it really wasn't a good time to go off in a self-reflection moment. I was just kinda bummed and disappointed, I hope the next one is a lot better then this one.

I rarely write reviews, and I never write them while still listening to/reading the books, but I just cannot believe that the heroine is as big of a b*tch as she is. I actually really liked Shaya in Spiral of Need, but I can’t believe this is the same character.

This book should come with a warning about it including cheating and punishing someone out of spite. They both know they’re true mates but while he’s trying to prove he’s trustworthy, SHE PURPOSELY GOES OUT WITH ANOTHER GUY. And he still treats her with respect after! He’s a great guy and she treats him like sh*t. And then the next morning she had the nerve to be suspicious of him!

I kinda wish I’d never bought this book because it has totally ruined my perception of a character I really liked in another book.

As good as I had hoped

If you enjoyed the first two audio books in this series you will like this book as well. Of course book 1 is my favorite, but I think I like this one more than book 2.

(Unlike other reviewers I won't spoil the plot with a long winded review.)

What does Jill Redfield bring to the story that you wouldn’t experience if you just read the book?

There were times that Nick's voice reminded my of Trey, but when they were in the same scene you could definitely tell the difference. Props to the narrator on her many voices!

I did laugh and found myself smiling a lot as I listened to the story.

Is it weird that I finished the book today and want to listen to the story all over again?

I loved the first two books in this series and I really liked this one but not quite as well as the first two. I was irritated with both Nick and Shaya because of their lack of communication and they were driving me insane with their stupidity. Of course there has to be some complication to make a book. But other than that the book was great, and I can't wait to see who will be in the next book. Phoenix Pack series will be an instant download for me and now the long wait for the next book commences. This series should be read in order so start with Feral Sins.

I really liked this one... Although...book 1 was hands down the best of the series so far...

This was way way better than book 2... I felt so sorry for Nick... and I am so glad Shyia didn't take a whole book to get over the fact that Nick didn't claim her... I am glad she left him, he totally deserved it, but she didn't take 3yrs to get over it... She eventually understood why Nick did what he did... It was a great addition to the Phoenix Pack Series...

I so want Dominic to have a book... I hope his true mate is Nick's sister..

Narration was great... I always enjoy listening to Jill Redfield...

Not a gripper for me

A handsome, charismatic, sexy and demanding Alpha were-shifter gives up everything for the chance to right wrongs and finally claim his true mate. Loved it all, the plot, the narrator, the characters, the pack drama, the villains, the twists, the surprises and the very romantic character development that the H/H both take before they can learn to trust each other again.

It was so well-written with snappy dialogue and hot sex scenes that, when I finally got to the end, I was tempted to listen to it all over again.

Worth a credit? Oh boy YES it would have been but for under $10 (what a bargain) I saved my credit for a more costly, but maybe not as enjoyable, book.

This story was better than the last one but not good enough for me to continue the series. These books are super hot🔥 BUT very repetitive. Also, the narrator using the same voice for all of the lead male characters which is a little annoying. Overall it's just the classic "Alpha male" and " feisty female" the plots are just kind of meh. If that doesn't bother you then they're ok reads. Good if you have down time between your real series though.

I've read all her books and I love this series! It's sweet, interesting, romantic with a hint of danger. And the speaker is really good! Can't wait for the next part!