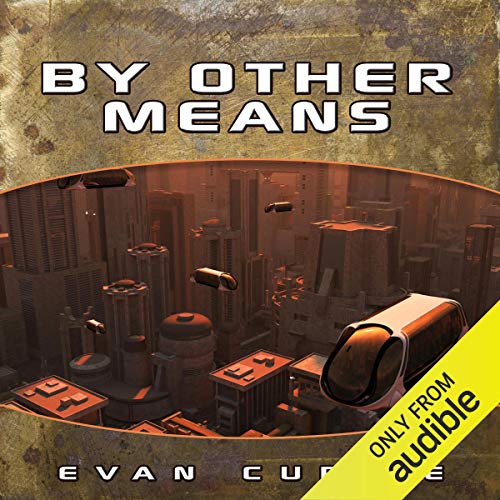 The Hayden War has ended, and now SOLCOM and the Alliance are face to face in talks, but neither side has the slightest idea what happened in the ultimate battle of the war. Amid political jockeying and diplomatic gamesmanship, Captain Sorilla Aida has been given an assignment: Find a weakness to exploit, buy SOLCOM time to learn just what the hell happened to Valkyrie, and make sure that the Alliance isn't prepared to risk another conflict in the open.

Sorilla has problems of her own, however, and after losing so much in the war she isn't as certain of her life choices as she used to be. Unfortunately for her, the Alliance, SOLCOM, and others don't intend to let her have time to figure it out for herself. The Hayden War is over; the Cold War is just beginning. By Other Means is the fifth book in the On Silver Wings series.

Aida - Diplomat by other means

We now find Aida as a major and her transformation continues to make her more emotionally human with this book having her involved in a, minimally, physical relationship. Due to the total annihilation of both the SOLCOM and Alliance fleets for reasons unknown, both sides agree to meet to discuss a peace treaty and Major Aida has been given the unwanted assignment of acting as the SOCOM ambassador's personal bodyguard. While both sides had ulterior motives (mostly intel gathering), neither wanted any conflict that might start another war. Unbeknownst to either side, a third party had other plans and early on, things went sideways.

ah, Aida was now in her element!

Both the writing and narration are still quite good.

The end was left wide open for another book

Is there any word of another? I really enjoyed the first four in the series, but as the pages wound down I was afraid the plot and storyline wouldn't be wrapped up, and unfortunately they weren't. I am a fan of Mr Currie and am awaiting the June release of Warrior King to continue that series. I hope there is another book in this series as it really needs at least one more.

Aida is expanding her resume of skills

By Other Means is Evan Currie's 5th installment of the Silver Wings series. As the aliens have elected to open talks with the humans, the story opens with negotiations in progress. Humanity has learned of at least 119 alien species in the Alliance with specialization as a major theme. Aida, now a captain, is assigned to the diplomatic protective detail, but her main role is to gather intelligence about the various players and their particular region of the galaxy that could prove useful should talks break down. While Aida gets to display her operator skills, she also branches out into traditional spook activities. She has also gained a well deserved reputation as a jinx for any spaceship she is aboard. Humans continue to surprise with their jack-of-all-trades adaptability.

The sci-fi elements are in line with previous installments, although the Ross ability to manipulate space and gravity is further explored. At the same time, Aida's experimental implants are deemed a failure, but they begin to imbue her with wild abilities that almost defy logic. More alien species are introduced with traders and spies. Some interesting alliances develop and more of the Alliance's dirty laundry are on display. One gets the sneaky suspicion that most of the Alliance will eventually press for peaceful relations with Earth with the assurance that Aida will refrain from wandering through the galaxy unchecked.

Dina Pearlman continues to impress as a narrator. Her range of voices of both genders is superb and her alien renditions come off as realistic and alien (as opposed to the more typical nasal, phlegmatic, or gravelly). Pacing and mood are nicely delivered making for a quick listen.