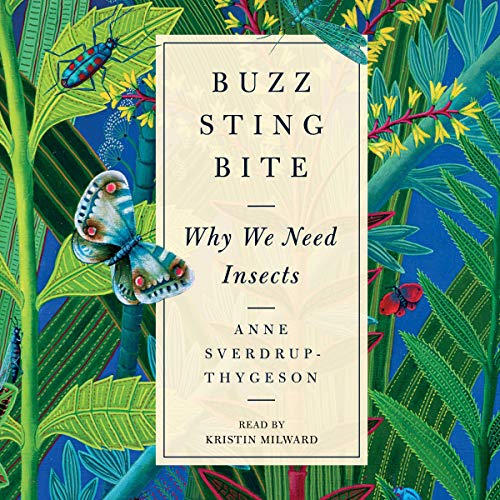 This enthusiastic, witty, and informative introduction to the world of insects and why we could not survive without them is “a joy” (The Times, London) and “charming...[h]ighlighting them in all their buzzing, stinging, biting glory” (The New York Times Book Review).

Insects comprise roughly half of the animal kingdom. They live everywhere - deep inside caves, 18,000 feet high in the Himalayas, inside computers, in Yellowstone’s hot springs, and in the ears and nostrils of much larger creatures. There are insects that have ears on their knees, eyes on their penises, and tongues under their feet. Most of us think life would be better without bugs. In fact, life would be impossible without them.

Most of us know we would not have honey without honeybees, but without the pinhead-sized chocolate midge, cocoa flowers would not pollinate. No cocoa, no chocolate. The ink that was used to write the Declaration of Independence was derived from galls on oak trees, which are induced by a small wasp. The fruit fly was essential to medical and biological research experiments that resulted in six Nobel prizes. Blowfly larva can clean difficult wounds; flour beetle larva can digest plastic; several species of insects have been essential to the development of antibiotics. Insects turn dead plants and animals into soil. They pollinate flowers, including crops on which we depend. They provide food for other animals, such as birds and bats. They control organisms that are harmful to humans. Life as we know it depends on these small creatures.

“Delivering a hail of facts with brio and precision” (Nature) Anne Sverdrup-Thygeson shows us that there is more variety among insects than we thought possible and the more you learn about insects, the more fascinating they become. Buzz, Sting, Bite is “a very enthusiastic look at the flying, crawling, stinging bug universe world, and why we should cherish it” (The Philadelphia Inquirer).

The content is very interesting. The salacious innuendos are annoying when discussing how the insects procreate. The narrator's voice is extremely annoying - to the point where I wanted to stop listening despite the facts being so interesting.

If you like insects (and who doesn't?), you'll love this book. It's a beautiful exploration of the other-worldliness of the six-legged crowd with we whom share this planet. Insects are so numerous and so varied. And yet, many people hardly notice them at all, except for the occasional annoyance of a fly or fear of a yellow jacket buzzing by. The book highlights a few interesting and amazing different types of insects, and sheds a bit of light on their world - and their importance to ours. The author does a wonderful job of explaining how they support the ecosystems around us, and the important roles they play - from pollination to assisting in the decay of things no longer alive. She also discusses the their tumbling population numbers, hinting at the dire consequences that are attached to vanishing insect populations on all other forms of life and the ecosystems that depend so much on insect life. It's a great read, for those with an entomological bent, and especially for those who know little about the amazing and mysterious insect world around us. Let Anne Sverdrup-Thygeson reveal some of those wonderful mysteries to you.

a must-read for any parent raising children

an amazing explanation of our place in this ecosystem and our unrelenting dependency on insects for survival.

The book was well written and a nice listen. I enjoyed the book and have told others they need to listen to this book.

I really appreciate that narrators tone of genuine interest that maybe other more informative text would lack. No topic drones on too long. Full of charming facts/ ideas just skimming the surface of much larger topics. Great if you are interested in learning more about our natural world from a very personable voice.

I purchased the Kindle version, with audible addition as I do most of my books to get the auditory reinforcement and visual. Buzz, Sting, Bite is an enjoyable read/listen chalk full of intriguing/intricate details about the amazing insect world we are surrounded by. I enjoyed the many facts and theories and as the author concluded...hope this book will bring about more public debate about global warming, bio-care, and many more discoveries of insects. Worth the read as an adult and young adults. Let’s keep the conversation and discovery going!

if you have an irrational fear of insects, I wonder if this book could make a dent in that feeling through education. it provides a great primer into the priceless role that insects play in the survival of our species.

Very entertaining and informative. Worth listening to again. Narrator added to the excitement of the material.

Getting past the "ick"

(As posted in GoodReads) It seems like the only books to which I give 5 stars are nonfiction. This is no exception. There were kind of 2 different things about the book: 1st, She talked about different animals and their lives and stages of life. I thought she could have gone into a little more depth on this, but it was pretty good. Insects are amazing creatures, and we humans tend not to grant them their due! 2nd: She explained a good deal of how we do and can benefit from insects overall! She realizes the "ick" factor, and emphasizes that it would behoove us to get past it. We do have our favorites: bees and caterpillars for instance. But fertilization happens NOT ONLY by bees, but several other insects are better at particular plants' fertilization. It is very good and informative!