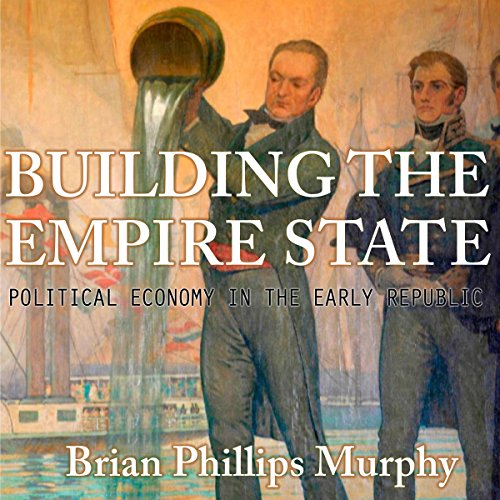 Building the Empire State examines the origins of American capitalism by tracing how and why business corporations were first introduced into the economy of the early republic. Brian Phillips Murphy follows the collaborations between political leaders and a group of unelected political entrepreneurs, including Robert R. Livingston and Alexander Hamilton, who persuaded legislative powers to grant monopolies corporate status in order to finance and manage civic institutions. Murphy shows how American capitalism grew out of the convergence of political and economic interests, wherein political culture was shaped by business strategies and institutions as much as the reverse.

Focusing on the state of New York, a onetime mercantile colony that became home to the first American banks, utilities, canals, and transportation infrastructure projects, Building the Empire State surveys the changing institutional ecology during the first five decades following the American Revolution. By playing a central role in the creation and regulation of institutions that facilitated private commercial transactions, New York State's political officials created formal and informal precedents for the political economy throughout the northeastern United States and toward the expanding westward frontier. The political, economic, and legal consequences organizing the marketplace in this way continue to be felt in the vast influence and privileged position held by corporations in the present day.

In this book Murphy examines the origins of American capitalism by tracing how and why business corporations were first introduced into the economy of the early republic. Murphy reveals how Alexander Hamilton and Robert R. Livingston and others led collaboration between political leaders and a group of entrepreneurs and persuaded legislative powers to grant monopoly corporate states in order to finance and manage civic institutions.

New York became home to the first American banks, utilities, canals and transpiration infrastructure projects. Murphy chronicles the first fifty years after the American Revolution following the Manhattan Company, the steam boat monopoly, the Erie Canal, the New York and Erie Railroad. I was interested in learning about Robert Fulton and his steamboat and Livingston who provided the money. I also found the section about why various types of banks were created and the pros and cons of each along with how they evolved into the banks we have today.

The book is well written and meticulously researched. Murphy was a Jefferson Scholar at Monticello and is a professor at Baruch College. I enjoyed learning about the building of New York by combining private and public companies to do the work of building and running various infrastructure projects. I remember reading later on about Belmont and his water company. Douglas R. Pratt does a good job narrating the book.

Hearing this book, all my prior readings about New York, Alexander Hamilton, early USA banking, and early USA political and legal history, crystallized together and made sense, for the first time. Perhaps each of my earlier readings were too topic-confined and pigeonholed, where this book spans them all fluidly and connects the dots. Here is a clear, careful explanation of the successful constructing of a government, a banking system, and a society and economy encompassing many mutually suspicious factions. It is a lucid tale of the past and a guide for the future. To all the noisy distortions and kicked-up dust in popular political lunacy of our day, this story's telling serves as a wonderful tonic. USA's vitality and success has been a product of the blending of all these potentially conflicting forces, and it wasn't an accident. Here, plain as day, carefully told, is the story of how it was done, by who with who, deal by deal, brick by brick. All those spitting venom at various factions in society can benefit from seeing a harmonizing between them, done right.
This stands as my single favorite USA history book, ever.