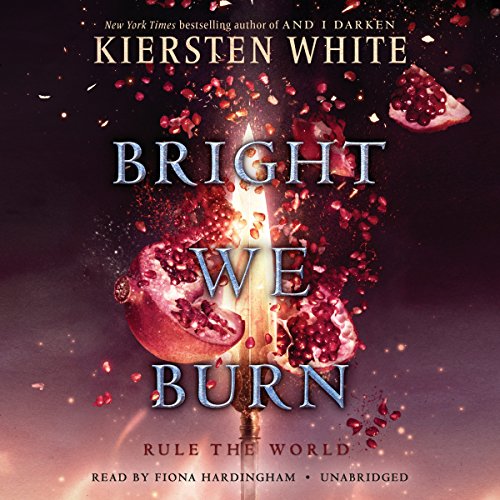 The tumultuous, edge-of-your-seat conclusion to the New York Times best-selling And I Darken series - the epic saga that reads like Game of Thrones...if it were set in the Ottoman Empire.

Who will live? Who will die? And who will rule triumphant?

Haunted by the sacrifices he made in Constantinople, Radu is called back to the new capital. Mehmed is building an empire, becoming the sultan his people need. But Mehmed has a secret: as emperor, he is more powerful than ever...and desperately lonely. Does this mean Radu can finally have more with Mehmed...and would he even want it?

Lada's rule of absolute justice has created a Wallachia free of crime. But Lada won't rest until everyone knows that her country's borders are inviolable. Determined to send a message of defiance, she has the bodies of Mehmed's peace envoy delivered to him, leaving Radu and Mehmed with no choice. If Lada is allowed to continue, only death will prosper. They must go to war against the girl prince.

But Mehmed knows that he loves her. He understands her. She must lose to him so he can keep her safe. Radu alone fears that they are underestimating his sister's indomitable will. Only by destroying everything that came before - including her relationships - can Lada truly build the country she wants.

Claim the throne. Demand the crown. Rule the world.

"Exciting, complex, and faithful to the feelings that drive human beings in love and conflict.... Highly recommended." (SLJ)

"White takes excellent advantage of the rich setting, exploring through historical people and cultures the timeless issues of faith and religions, love, the importance of geography, and the complex intersections of each as boundaries conflict." (VOYA, starred review)

This was an absolutely amazing story which was only made better by the narrator. Fiona Hardingham is a great narrator and I plan to listen to many more books narrated by her. Amazing!!

A stunning conclusion to the Vlad the impaler retelling we all never knew we needed. These characters will stay with me always.

I have a love/hate relationship with this series. The first book was tortuous to finish. I didn’t care about the characters. However, I was curious about the story so onto book two. Really enjoyed that story. I was worried about how the series was going to wrap up, but it worked well for me. I ended up understanding and caring about the characters. I miss Lada, Radu and Mehmed.

I feel so sad it's all over

It was awesome to finally see some of the more famous scenes of Vlad's rulership. I'm sad to be at the end of the series. White really made these characters her own and molded them with life in mind. I simply loved this.

I'm going to miss these characters I can't believe it's over. Wonderful book with a wonderful ending.

Great ending for a fascinating story

absolutely amazing ending. I think out of all three book to with my favorite with three coming in second.