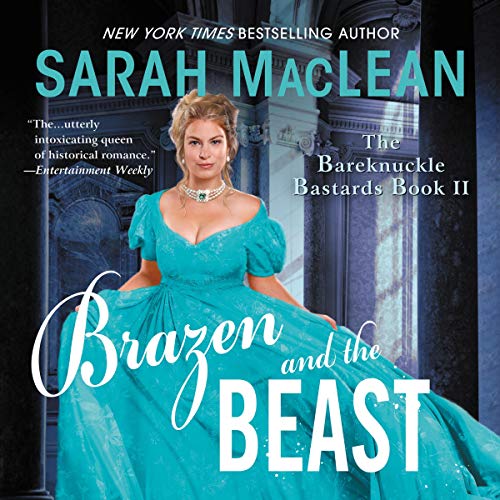 Brazen and the Beast

New York Times best-selling author Sarah MacLean returns with the next audiobook in the Bareknuckle Bastards series about three brothers bound by a secret that they cannot escape - and the women who bring them to their knees.

When Lady Henrietta Sedley declares her 29th year her own, she has plans to inherit her father’s business, to make her own fortune, and to live her own life. But first, she intends to experience a taste of the pleasure she’ll forgo as a confirmed spinster. Everything is going perfectly...until she discovers the most beautiful man she’s ever seen tied up in her carriage and threatening to ruin the Year of Hattie before it’s even begun.

When he wakes in a carriage at Hattie’s feet, Whit, a king of Covent Garden known to all the world as Beast, can’t help but wonder about the strange woman who frees him - especially when he discovers she’s headed for a night of pleasure...on his turf. He is more than happy to offer Hattie all she desires...for a price.

Soon, Hattie and Whit find themselves rivals in business and pleasure. She won’t give up her plans; he won’t give up his power...and neither of them sees that if they’re not careful, they’ll have no choice but to give up everything...including their hearts.

the narrator destroyed the book. couldn't listen to her as at the end of each sentence it sounded like she was in excruciating pain. HORRIBLE.
please do not use this narrator again,

Sarah has done it again!

Justine Eyre and Sarah MacLean have teamed up to create another masterpiece! Sarah has a way of drawing characters who are complicated and messy and they make you love them and want to know everything about them. Justine's voice brings them to life and has you not wanting the story to end. This series keeps getting richer and more compelling with each installment. I can't wait for Grace's story and I hope she either gives Nick & Nora their own story or at least weaves more details about them in Grace's.

The Year of Hattie

After enjoying the second novel The Bareknuckle Bastards series, Brazen and the Beast I’m officially a fan of Sarah MacLean. I enjoy her voice and the characters she pens. I plan on reading and/or listening to her backlist while I wait for the next release in the series.

I think the series should be renamed to The Bareknuckle Bastards and the Old Maid Virgins They Love. Hatti like the heroine in the previous book is in her late twenties (turning 29 to be exact) and because of the time period she is considered to be an old maid because she has not been married. Hatti doesn’t want the life society tells her she should have. Marriage and a family with her husband running a business. She wants to run her own business and she knows the only way to do so is to ruin her reputation by getting rid of her virginity. If she does so no respectable gentlemen will want to marry her.

Hatti meets Whit aka Beast the night she decided to go to a brothel that caters to females. Someone threw an unconscious Whit into her carriage. She believes him to be the most beautiful man she has ever seen. They share a kiss before she pushes him out of the moving carriage.

Whit cannot believe Hatti is not afraid of him like everyone else. She pushes all his buttons but he knows she is not for him. He believes she is too good for him and that if he were to go after her, it would put her in danger from his brother Ewan.

Hatti and Beast make an agreement that he will help her with business plan and the plan to her ruination. As the two dances around their attraction, they come to love each other. Watching them overcome their issues and find a HEA was very enjoyable. The banter was fun, the chemistry was very sexy and there was a touch of action and danger to round out Brazen and the Beast into a perfect romance.

Justine Eyre continues to delight my ears with her narration job on The Bareknuckle Bastards series. She does an amazing job switching from female to male characters. Justine is one of the few female narrators who can easily do a sexy male voice without sounding forced. She is the reason I used an Audible credit on release day even though I had an eARC of Brazen and the Beast.

I loved the first in series and this one just as much. I cannot wait for the third

I liked this a lot. A bit too much inner thoughts but not a deal breaker. Nice to see Devil and Felicity again. I hope that book 3 is Grace.

Love the Bareknuckle Bastards series, can’t wait for the next book. Justine Eyre did a wonderful job with the narration

Could Have Been Engaging But Disengages Instead

It's not till the last couple of chapters that the writing style allows for some uninterrupted dialog between H and h. The story is a good story but getting it told is like driving a short block, stopping for a long red light, driving a short block, stopping for a long red light and so on, for miles and miles. In this analogy, the blocks are one-word utterances, one sentence or a question and the long red lights are the inner thoughts of the character, explanations about the character and character descriptions. I kept forgetting what the next spoken word was replying to. It was so frustrating that I had to take a break from listening twice and listen to something else. But I like the story and really wanted to hear the conclusion. "Brazen" is an apt description of the heroine, Hattie. I like Hattie a lot and the theme of "The Year of Hattie" worked very well to tell this story.

Amazing - perhaps better than the first, which says a lot!

You must read (and/or listen to) this book!

We finally get to know Beast! Devil and Felicity are neither gone nor reduced in development or importance to Beast and the rookery. We meet Henrietta (the Brazen of the title), one of the strongest female leads I’ve encountered. She knows what she wants and goes for it tirelessly. MacLean shows us her intelligence and courage through her actions. Yes, the words are there but I feel like they are there to “hit you over the head” with the strength that Hattie demonstrates.

Beast comes to like. He talks more than I expect and is much more complicated. It isn’t just the father was evil and I ran away - his story and the person he formed is more than that, from his name to his watches to his relationship with the world.

The rookery is not expanded on much (bummer!) but this isn’t the dark/light into Covent Garden story the first book was. We do get to encounter familiar places and people - giving a slightly different view of the rookery, making that setting more nuanced.

I adore the connections to other if MacLean’s books, including the doctor (who seems a bit less quirky and a bit more settled now that he is married and living where he isn’t the strangest person around - though he is still painfully blunt) and the boy who works for the brothers.

I listened to Wicked and the Wallflower last week in preparation for the release of Brazen and the Beast and now plan to listen again to see what I missed.

The performer of the audio recording - Justine Eyre, has matched or surpassed her best. I’ve been listening to her for years, and this recording shows how much she has grown - and she was great to start. She is amazing - the pauses, the voices, conveying thoughts vs. conversation, the understanding, and the link to other characters in other books.

I look forward to the third story... I want to know the title and release date already!

The narrator Justine Eyre did a fantastic job. I really enjoyed this story and the characters.