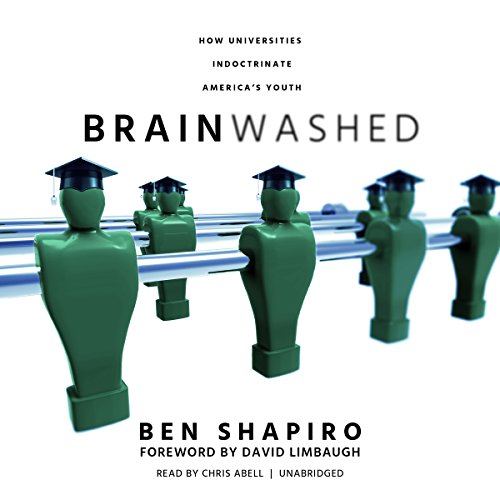 When parents send their children off to college, Mom and Dad hope they'll return more cultivated, knowledgeable, and astute - able to see issues from all points of view. But, according to Ben Shapiro, there's only one view allowed on most college campuses: a rabid brand of liberalism that must be swallowed hook, line, and sinker.

In this explosive exposé, Ben Shapiro, a UCLA graduate, reveals how America's university system is one of the largest brainwashing machines on the planet. Examining this nationwide problem from firsthand experience, Shapiro shows how the leftists who dominate the universities - from the administration to the student government, from the professors to the student media - use their power to mold impressionable minds.

Fresh and bitterly funny, this book proves that the universities, far from being a place for open discussion, are really dungeons of the mind that indoctrinate students to become socialists, atheists, race baiters, and narcissists.

Don't. Not if you are LGBTQIA+

Ben Shapiro is, in a way, right. Liberalism is being forced into the minds of students. But at Chapter 4, I had to stop. Being lesbian myself, it stung so much. I was unaware of Mr. Shapiro's now obvious and disgusting homophobia. I know he will never see this, but for people who are "unnatural and disgusting" -- a quote from this book -- it will hurt your very core, and I wish to inform you of this quite honestly bigoted standpoint. I am very accepting of people who don't think it's right, but Mr. Shapiro's opinions simply hurt my soul.

fine audiobook that does a good job of capturing bens style, can’t make up for terrible book

One of the worse books I’ve ever encountered, ben manages to put all the pretentiousness of a 16 year old virgin into 7 hours of complaining about “degeneracy” such as openly talking about sex and accepting gay people. Uses cherry picked examples to try and say every college is run pedophile, marxist, muslim, holocaust deniers, who wish to hunt down conservatives. Ben does not address what may have caused the left to have a grasp on academia and offers no theory on it. Only shows weak one off examples and manages to say chomsky is full of shit, in this garbage book chomsky could have written in a coma. Anyway it is very clear ben was a virgin when he wrote this as his disgust of sex or descriptions of it is hilarious. Play on 1.5x speed for the full ben shapiro experience

I hadn't noticed that it was only the audiobook version of this book that was released in 2017. The actual book turned out to be from 2010. Which means that the examples given are from that political period as well, naturally.

Nevertheless, Shapiro has a sharp mind and the analysis he offers is still current when it comes to the political climate on American university campuses.

Narration was well-done, the narrator tried to at least somewhat "channel his inner Shapiro". However, I'd have preferred Shapiro himself, I believe his book would have benefitted extra from the unique speed and tone that are so characteristic of the author.

Been Shapiro great as always very good book loved it thanks for the information!! thanks

Definitely proves the title of this book

It covers the biases of liberal universities and the intolerance of conservative ideology. It is a fantastic book for actual free thinkers.

The sad state of us education

Controversial, graphic, true? Shapiro might be too much alarmist or is it? A rare opinion

Does anyone actually study at college?

Enjoyable. Eye-opening. I did not experience any of this type of behavior in my college days. But then again, I was actually ....studying... Whatta concept I guess. And now, with a kid in college, one a year away, one 2 years out and one 4 years out. I am on the hunt to further empower my kids from the BS that's apparently out there. This is a good start.

This book kept my attention to the time of finishing it in one sitting. Well sourced, well stated. Give this a listen.

When I saw that the release date for this audiobook was 2017, I expected to expected to hear a discussion of white privilege, Antifa, and black lives matter among other topics. But this book was about John Ashcroft, George Bush, & the war in Iraq. It turns out that the book is copyright 2004, not 2017. I was misled. The audiobook was released in 2017. Before Amazon purchased Audible, I do not think Audible would have been deceptive like this. Very disappointed.